On a TV near you, scenes from Connecticut’s crowded campaign 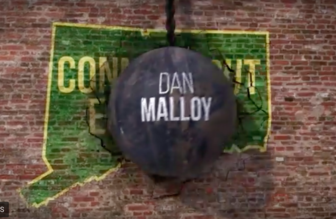 Four of the five Republican candidates for governor are on television with ads that offer dashes of biography with promises to cut taxes, shake up Hartford, cut state employee benefits, clean house, fight insiders, restore growth and, yes, think outside the box. All this in 30-second servings.

Two of them, businessmen with last names that invite confusion, David Stemerman and Bob Stefanowski, use imagery of a wrecking ball named Gov. Dannel P. Malloy as the source of Connecticut’s problems. Timothy Herbst, a former Trumbull first selectman, says the state needs his leadership, vision and guts. Danbury Mayor Mark Boughton talks quietly about last year’s surgery, showing a CT scan image of a lesion removed from his brain.

Stefanowski and Stemerman, two political newbies who have opted out of the state’s voluntary Citizens’ Election Program, which keeps participants on tight budgets built around $1.35 million in public grants, have been on the air for months. Obtaining their public financing on June 20, Boughton’s ads went up Thursday and Herbst’s on Monday.

Steve Obsitnik, the fifth candidate, is off the air awaiting word from the State Elections Enforcement Commission on his application for public financing.

Competing with summer vacations, they have five weeks to excite voters about a mid-August primary involving three men who never have held public office and two who have. None are household names, giving the ad makers the challenge and opportunity to define them with words and images that viewers will notice and remember.

The mayor’s first ad tries to find advantage in a liability — any doubts voters might have about Boughton’s health after his surgery a year ago and seizure earlier this year. His surgery is a comeback story, and Connecticut could use a good comeback story, Boughton says.

“You know, there are things you take for granted, until you are faced with losing them,” Boughton says in the spot. “A neurologist discovered a large mass inside my brain. I was told there was a chance I’d never walk or talk again. But I went to the best surgeon in the world, and with God’s grace and his steady hand, the operation was a complete success.

“That’s my comeback story. I want to use my time and voice to give Connecticut its own comeback story, to change its future, and to turn our state around.”

The commercial is unlike anything on the air in Connecticut, a plus as the airwaves grow cluttered with ads. But it risks injecting doubts about Boughton’s health in some voters, even if it reassures others. Boughton says he thinks his forthrightness will silence any whispers about his health.

His campaign is pivoting this week to a more conventional spot focused on his record as mayor of Danbury, a city of 80,000 that is the heart of a regional eight-town labor market with a 3.5 percent unemployment rate in May, the lowest of the state’s nine labor markets. The piece may strain credulity for some, flatly promising to eliminate the state income tax.

Without precisely saying how he would replace the loss of Connecticut’s single largest tax, Boughton has said he would eliminate the levy over 10 years, a promise that would require winning three terms to deliver. In the commercial, there is no mention of a 10-year phase out.

Boughton’s ads were produced by Nick Everhart of Content Creative Media, whose past clients included a Super PAC that supported the presidential campaign of Mike Huckabee, another that backed Paul Rand, and various interest groups, including Nebraskans for the Death Penalty and the Portland Cement Association. One ad that aired in Iowa for Huckabee featured two women, a Bible on the table, questioning Ted Cruz’s commitment to Christianity.

Herbst, 37, the youngest of the five candidates, focused his first ad on his eight years as first selectman of Trumbull, a Bridgeport suburb of 36,477 that generally ranks high in surveys of best places to live, work and do business. Walking towards the camera, Herbst  introduces himself as a candidate with an attitude:

“I’m Tim Herbst and I’m running for governor to shake up Hartford. In Trumbull, I reformed a broken pension system. Eight balanced budgets and two tax cuts later, Trumbull is thriving. But the Trumbull turnaround didn’t happen by accident. It required leadership, vision and guts. As governor, I’ll bring this same passion to Hartford. Ending pensions for politicians and paying off debt. Let’s clean house.”

Balanced budgets actually are a requirement for municipalities in Connecticut, and Herbst’s tenure offered taxpayers a mix of tax increases and cuts.

When Herbst took office, Trumbull’s pension system was only 27 percent funded. Herbst shifted new employees to a defined contribution system and ended pensions for political appointees and the town’s chief elected official — him. He says the town made its entire actuarially required contribution to the pension fund in each of his eight years in office.

The ad was done by FP1 Strategies, a soup-to-nuts political and advertising firm that also employs Jon Conradi, the general consultant to the Herbst campaign. The firm’s three founding partners are Danny Diaz, Jon Downs and Terry Nelson, alumni of at least one of the Bush-Cheney presidential campaigns.

Stemerman’s newest ad is one in a series of spots that turns a verbal cliche of thinking outside the box into a graphic element — a transparent box that floats through all his commercials, this time constraining political insiders, but not him. It opens with Malloy behind the wheel of a crane with a wrecking ball.

“The last eight years under Gov. Dan Malloy has been a disaster for Connecticut — families gone, companies gone. I’m David Stemerman. I used outside the box thinking in the business I built from scratch by seeing opportunities that others could not. I don’t owe the Hartford insiders anything. While we renegotiate state union contracts, cut spending and taxes, make real change, join me. Let’s save Connecticut.”

The business he “built from scratch” is Conatus Capital Management, a Greenwich hedge fund Stemerman closed so he could run for governor.

The man behind his advertising is Russ Schriefer of Strategic Partners & Media. He was a full-time strategist and media adviser to Mitt Romney’s presidential campaign in 2012, but Stemerman was more impressed by the work he did electing Republican governors in blue states during tough economic times — Chris Christy in New Jersey in 2009 and Larry Hogan in Maryland in 2014.

Stemerman, who calls himself a great admirer of the creative branding Steve Jobs managed on behalf of Apple, said the floating box will be a unifying image of his campaign advertising.

A new element in his latest spot is subtle one: His first name, David, is more graphically prominent, an acknowledgement that voters sometimes confuse him with Stefanowski, a former senior executive with GE and UBS.

Stefanowski’s new ad, which went up the same day Stemerman released his to the media, also opens with a wrecking ball representing Malloy, prompting sniping between the two campaigns. Stefanowski was the first on air, but Stemerman has been using the image in digital ads since the spring.

The spot borrows more from children’s television than Stemerman: It brands him as Bob the Rebuilder, a play on the children’s show on public television, Bob the Builder.

“Dan Malloy wrecked Connecticut’s economy. Bob Stefanowski is running for governor to rebuild it from the ground up,” a narrator says as Stefanowski arrives in a pickup truck, puts on a hard hat, and introduces himself with, “Call me Bob the Rebuilder.”

Stefanowski was a senior executive at GE, the chief financial officer of UBS Investment Bank and the chief executive officer of DFC Global Corp, where he says he drove a restructuring of the company, lifting profits from $40 million to $145 million in two years. He left the company in 2017.

One of his ads in 2016 was the piece that exploited Hillary Clinton calling Trump supporters “deplorables.”

A different look at the defense budget