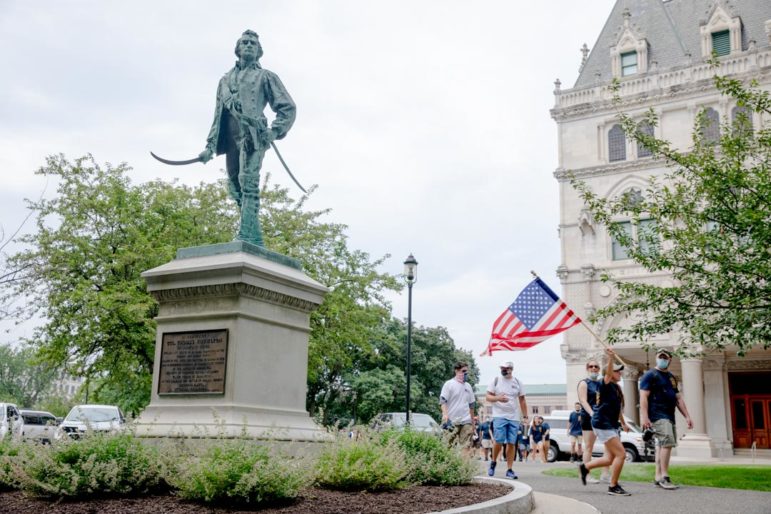 "Back the Blue" protestors leave the Connecticut State Capitol on Thursday, July 23.

Imagine being a police officer in the State of Connecticut.  You wake up at 5 a.m. and head to your car, after saying goodbye to your family, knowing – that day as with every — you might never see them again. At the station, you sling over your head a bullet proof vest, and finish putting on your uniform concluding with your last line of defense: a tool belt with your service weapon, handcuffs, Taser and other items that help you to serve and protect the public (and yourself). You get your riding assignment, and head out.

Now imagine responding to a call for a male causing a public disturbance at a variety store.  You arrive and have only seconds to learn the male is intoxicated and has assaulted the cashier — who’s lying on the ground bleeding from the head. Based on your training, and what you have heard and seen, you decide to pull out the cuffs and arrest the man. Off to the station he goes for booking. You feel good that you took this man off the street before he could hurt anyone else, and the shopkeeper is grateful you arrived before he was hurt even worse.

Six months later, a letter comes to your home: Dear Officer John Doe, you are being sued for the improper arrest of my client, your deliberate and willful actions against my client violating his constitutional rights have caused him great distress and anguish … see you in court. Because you’re no longer covered by qualified immunity, you must hire your own attorney to represent you in this lawsuit. The next day, another letter from another attorney from another arrest you made months earlier arrives; and so on. And the letters just keep rolling in….

How is an officer of modest means to pay for an attorney to defend against all these cases? How can anyone prevent frivolous lawsuits from being filed? The easiest way is to just stop arresting people. Stop trying to resolve problems; don’t respond to calls; don’t make contact with the public. Just stay in the shadows — so you don’t get sued.

That is what officers will be forced to do if this new bill is passed in the Senate this week.  It already passed in the House of Representatives where the Democrats voted to handcuff every police officer in Connecticut.

Now it is up to the Senate to stop this madness. All State Senators should vote down this police “reform” bill.  If it passes, crime will increase, and our quality of life in Connecticut will diminish. With an issue this important, and a bill so long (70 pages of 2,000 lines) it should be studied carefully, and undertaken in a deliberate manner with input from the public and criminal justice professionals. And there is no reason just to target police: if we’re going to limit their immunity, then perhaps we should do the same for all government officials whose jobs demand a high degree of public trust, including teachers, corrections officers, judicial employees, firefighters, social workers, judges, and prosecutors, just to name a few.

And maybe even our elected representatives, too. I know my state senator, Alex Kasser, plans to vote in favor of this flawed bill based on her social media posts. Before she puts the cuffs on cops, she should consider limiting her own perks, putting on the uniform, facing the dangers police routinely encounter, and making some of the life-and-death decisions they have to make every day, before she decides to decimate the morale and membership of our law enforcement departments all across the state, and most especially in her district.