Why are trucks on the Merritt Parkway? 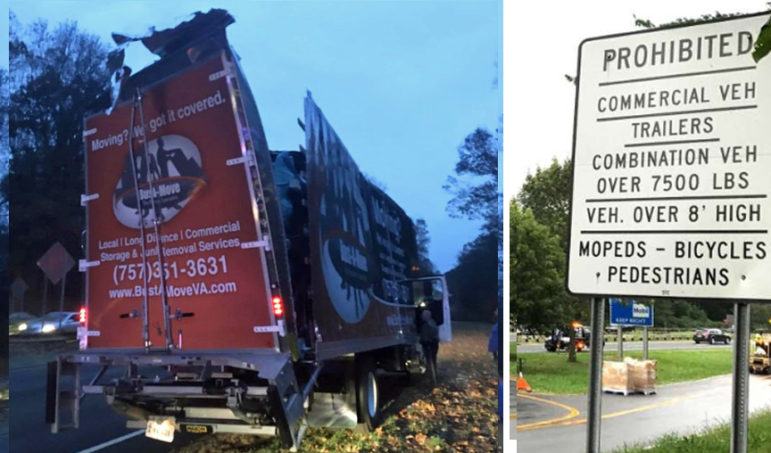 Hardly a week goes by that an over-height truck and a low-slung bridge on the Merritt Parkway have a close encounter of the worst kind:  a collision.

The King Street bridge in Greenwich has been hit 150 times in the last decade, 24 times last year alone.  Despite $1.8 million in warning devices installed to prevent these strikes, they keep happening.

All of the bridges on the Merritt Parkway, originally built to a minimum standard of 11 feet at the abutments, are too low for trucks.  In some places the bridges are even lower due to roadbed re-grading. The road just wasn’t designed for anything but passenger cars.

Trucks aren’t the only vehicles banned from the parkways.  So too are RV’s, cars towing trailers, buses, hearses (in funeral processions) and all commercial vehicles. That includes any vehicle with advertising or logos on it, even passenger cars with “Combi” (combination passenger and commercial) plates.

But we know those trucks are there.  We see them all the time.  So why aren’t they getting ticketed?

The CT State Police tell me it’s an issue of priorities.  They only have two troopers patrolling the Merritt Parkway per shift and their hands are full handling speeders, traffic accidents, drug busts etc.  But they still manage to issue a few tickets per shift to the illicit truckers.

The problem is, it’s only a $92 ticket for violating the prohibited vehicles warning signs at every entrance.  That’s not much of a deterrent.  A bill last year to raise that penalty to $500 never made it to a vote in the legislature.

The old “Prohibited” signs were hardly noticeable and were wordy and confusing.  So CDOT has just changed out all the signs to something simpler, more colorful and attention-getting.  Maybe they’ll help.

But even where more sophisticated warning systems employing lasers, blaring horns and flashing lights are in place, bridges still get struck. Blame the drivers.

Many drivers say their GPS for directing them onto the parkways, so some insurance companies are offering financial incentives for fleet owners who use “smart GPS” designed for commercial drivers which will warn drivers of over-height vehicles to stay away.  But if you’re using a regular GPS unit or an app like WAZE, you’re out of luck.

When a truck does strike a bridge there are consequences.  In addition to often ripping the roof off the vehicle, the troopers also call in their Truck Squad which can issue thousands of dollars in fines if they find other violations regarding the weight of the vehicle, the driver’s log etc.

And as with motor vehicle accidents on any state road, if you damage one of the Merritt Parkway’s historic bridges or knock over a sign, your insurance company is going to pay.

Usually, when an over-height truck strikes one of the Merritt’s 40 concrete underpasses, the truck loses.  But any damage to these historic bridges, many of them recently restored, can take months to get repaired — not to mention the incredible backups and delays from these accidents.

When the Merritt Parkway opened in 1940, the speed limit was 40 mph and it was designed to carry 18,000 vehicles a day.  These days, outside of the bumper-to-bumper rush hours, the average speed is 73 mph and the parkway handles 90,000 vehicles per day. That’s enough.

We must reject continuing efforts to open this scenic byway to trucks. They just don’t belong there.

14 thoughts on “Why are trucks on the Merritt Parkway?”