Why I am a Progressive legislator 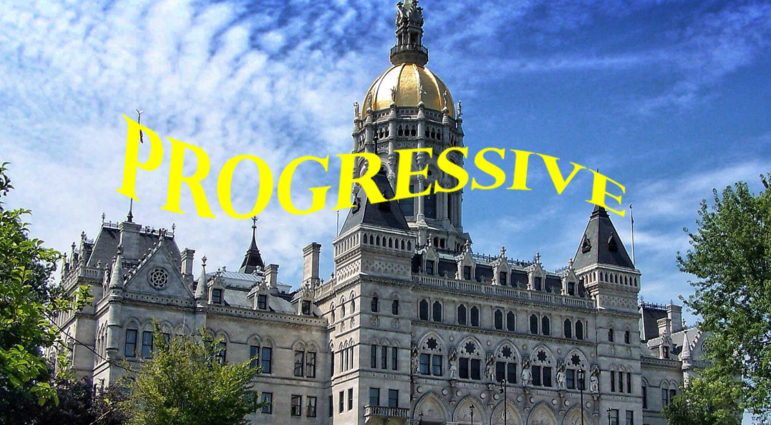 On Earth Day, some legislative colleagues and I joined about 40 young environmental activists at Hartford’s Riverfront Plaza for a “Meet Your Legislator” event hosted by the youth-led Sunrise Movement. I got there a bit early, and, standing on the stage beneath the awning, watched the young activists walk up the wooded path along the Connecticut River with garbage bags slung over their shoulders. After a morning spent picking up all manner of human detritus – soda bottles, discarded plastic gloves and beer cans — they were eager to cool off and talk about environmental bills moving through the legislature.

During the introductions, I described myself as “unapologetically progressive.” To my surprise, the group clapped. One young man said, under his breath, “Thank God.” A young woman said, “At least somebody is!”

Initially, I was pleased by this warm reception, and felt reassured that increasingly, many young people have progressive leanings. Later, however, I grew troubled by their reaction. Why were they so surprised? Do they meet so few politicians who share their values that I seemed an anomaly?

Currently in the Connecticut Legislature, approximately 30 of us elected officials are members of the Progressive Caucus. Do we agree on every bill or every initiative? No. As Democrats, we are, for better or worse, living together under that famously “big tent.” It’s not always an easy cohabitation – Democrats are notoriously more likely to squabble and criticize one another than Republicans are. In other words, we don’t march in lockstep. But we do share a common vision for a world of equity, inclusion and prosperity for everyone, not just the wealthy or white.

What exactly is a Progressive? Is it a Liberal rebranded? For a while, elected officials who had all the characteristics of a liberal didn’t want that label for fear of being politically marginalized or seen as naïve. And perhaps, too, there was an element of perceived hypocrisy – liberals sometimes walked right up to the defining vote and then caved (as was painfully parodied in the 1966 Phil Ochs song, “Love Me, I’m a Liberal”).

So, what of the march from the “Liberal” of the 1960s to today’s “Progressive?” The overly simple difference is that whereas Liberals would vote to use taxpayer dollars to advance social agendas, Progressives seek a fundamental reform of how government and the economy are conducted. We seek to change ingrained systems that have, for generations, methodically excluded the majority while elevating and enabling the most fortunate minority.

Those young climate activists – many of whom cannot even vote yet – reminded me that if ever there were a time for progressive action, this is it. The climate crisis, economic inequities exposed by the pandemic, the rise of right-wing extremism, rampant racism, growing misogyny and homophobia, voter suppression, and mounting protectionism all call for bold reforms.

So, what does today’s Progressive really stand for?

We believe climate change is an existential threat. We know it’s real, largely caused by human activity, and that it must be addressed in a way that brings justice to underserved communities. So we support HB 6551: An Act Concerning Environmental Air Quality (our “Environmental Justice” bill) and SB 928: An Act Concerning Recycled Content for Products Sold in Connecticut (the modernized Bottle Bill).

We believe “essential workers” should be treated as such. During the pandemic, low-wage workers – many of them people of color – put their own lives on the line for the rest of us. As Progressives, we believe in a budget that will support essential workers with wages and protections they deserve through HB 6478: An Act Concerning Workers’ Compensation.

We believe in recovery for all through tax equity and reform. We should expect the very wealthy to pay the same proportion of their income that the rest of us pay. So we support HB: 6187 and SB 821: An Act Concerning the Restructuring of Certain Taxes and Tax Equity.

We believe healthcare is a human right. The insurance giants have put out the narrative that a public health option is a jobs-killer. In fact, the opposite is true. Expanding the State’s health plan to allow small businesses and non-profits to offer affordable healthcare to their workers helps everyone. So we support SB 842: An Act Concerning Health Insurance and Health Care in Connecticut.

We believe everyone is entitled to safe, accessible and fair elections. Progressives believe voting is a right that should be afforded to every citizen. Because Connecticut’s voting regulations are embedded in its constitution (rather than in statute), we support two resolutions that would be on the ballot for all voters to approve: HJR 58: Resolution Proposing a State Constitutional Amendment to Allow No-Excuse Absentee Voting, and HJR 59: Resolution Approving an Amendment to the State Constitution to Allow for Early Voting.

We believe all people have the right to safe housing. The pandemic has put a terrible burden on both renters and landlords. Despite relief funds, some people still struggle to pay but cannot afford legal representation, and so we support HB 6531: An Act Concerning the Right to Counsel in Eviction Proceedings.

We believe that science and data should drive public health decisions. Communal responsibility is a core tenant of Progressives. That’s why the vast majority of us supported HB 6423: An Act Concerning Immunizations.

We believe in sensible gun safety. As the move grows nationally for improved gun safety laws, we support HB  6355: An Act Concerning Risk Protection Orders or Warrants and the Effect of the Issuance of a Physician’s Emergency Certificate on a Person’s Ability to Possess Firearms (known as the “Red Flag” law, which would allow a concerned family member or doctor to aid in the removal of a gun from someone at risk of self-harm or harming others).

We believe in true family values. We support a law to acknowledge legally that same-sex couples have the same parenting rights as heterosexual couples do through HB 6321: An Act Concerning Adoption and Implementation of the Connecticut Parentage Act.

We believe in women’s rights. Domestic violence has increased three-fold during the pandemic, and we are adding coercive control to the domestic violence statutes through HB 1091: An Act Concerning a Study of Criminal Laws of this State.

We believe torture is morally reprehensible. Solitary confinement is torture and should be abolished, so we support SB 1059: An Act Concerning the Correction Accountability Commission, the Office of the Correction Ombuds, the Use of Isolated Confinement, Seclusion and Restraints, Social Contacts for Incarcerated Persons and Training and Workers’ Compensation Benefits for Correction Officers.

We believe in reparations. Most of us will only vote to legalize recreational cannabis if the final bill has a strong social justice component to address the failed “War on Drugs” policies that economically disadvantaged so many people of color. Therefore, we support HB 6377: An Act Concerning Labor Peace Agreements and a Modern and Equitable Cannabis Workforce .

We believe in the alleviation of suffering. We support compassionate, end-of-life care as proposed in HB 6425: An Act Concerning Aid in Dying for Terminally Ill Patients. Alas, this bill did not make it out of the Judiciary Committee, but I include it as a priority none-the-less. There is always next year…

I’m under no delusion that every young person would agree with all of these legislative initiatives. But it’s a short leap from caring for our planet to caring for one another. And so I’m hopeful these legislative priorities will resonate with them as surely as climate change issues do. For when civically engaged young people compare this agenda to one that desecrates the planet, cuts taxes for the rich, gives corporations free reign, and vilifies “the other” – in other words an agenda based on fear and loathing versus one born of compassion and hope – I believe most will proudly call themselves “Progressives.”

Christine Palm is State Representative for the 36th Assembly District comprising Chester, Deep River, Essex and Haddam. Palm, an assistant majority leader, serves as vice chair of the Environment Committee and chair of the Internship Committee.