A big reason for returning to campus: Students want their social lives back. 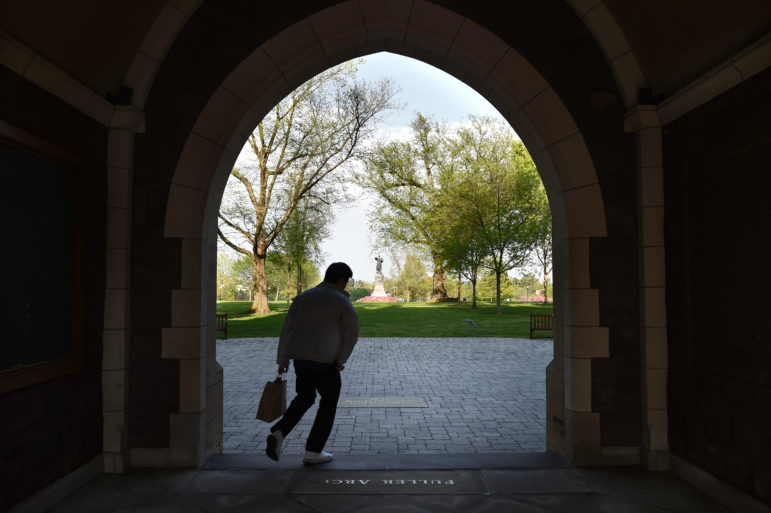 A student walks through the Fuller Arch to the main quad at Trinity College in Hartford.

After a summer of uncertainty, colleges began rolling out their official plans for the fall semester in early July, in accordance with the regulations for reopening set by Gov. Ned Lamont. Despite rising infection rates outside Connecticut, schools across the state will be welcoming students back to campus at the end of August in varying capacities.

The detailed plans for testing, housing, classroom design and disinfection are the schools’ way of trying to control the uncontrollable, but something important is missing. The biggest threat to campus safety is one of the primary reasons why students are coming back to school in the first place: they want their social lives back.

Many schools in the Northeast are hedging their bets on a new concept called the “family unit.” This concept is one of the specific guidelines outlined in the report on gradually reopening higher-education campuses in Connecticut. The overall premise is that you may only interact with those in your designated “unit” – the small group of students you live with.

The reopening plan for Wesleyan University states: “Student social events and parties with others outside of family units or cohorts are prohibited.” Quinnipiac University will also be using this model. Elizabeth Lupinacci, rising senior at Quinnipiac, explains, “As a senior, the family unit is fine. If I can only go to the cafeteria or the library with those people, then that’s fine with me, but it seems like it may limit the initial making of friends for freshman.”

Upperclassmen, who already have established friend “pods,” are much more able to establish safe boundaries than underclassmen, thrown together at random. Students at other Connecticut schools have additional concerns, and reason that the “family pod” will inevitably be broken for academic reasons. Eliel Duquene, a rising sophomore at the University of Saint Joseph, explains, “I was always with my friends, especially when it came to studying. We were in groups, that’s where I worked the hardest and did my best.”

The “pod” concept is so antithetical to how college students actually live and work, that it seems to have been crafted only for the peace of mind of the parents.

Additionally, these reopening plans focus so much on the on-campus guidelines, that they fail to mention the biggest risk of all: off-campus life.

Tyler Lasicki, a rising senior at UConn, will be living off-campus with his friends in the fall. He shared his predictions regarding off-campus social gatherings: “They’re not possible to stop, especially when off-campus students have free reign, those activities will go on regardless.”

Another challenge is that the college-aged demographic generally struggles to comprehend risk.  Bede Agocha, Assistant Professor in Residence in the Department of Psychological Sciences at UConn, explains: “Their frontal lobes aren’t fully developed, and that’s the area where the critical pieces of being a good decision-maker tend to reside.” College is a “really a great period for growth,” but not for thorough risk assessment.

Furthermore, as young-adults gain confidence as they mature, Agocha cautions that this newfound confidence can quickly shift, and “give them the sense that they are invincible.” This need to “push the envelope,” as Agocha puts it, is an integral part of self-exploration and a collegiate rite of passage.

Some schools have taken steps to combat this: Yale University is requiring their students sign a community compact, stating that students must adopt behaviors to “reduce the transmission of COVID-19,” and if they don’t, “the university may take administrative action to prohibit [students] from participating in any in-person campus activities, including residency.”

Inevitably, school administrations will have to intervene and decide if off-campus violators of the community compact will face disciplinary action. In trying to avoid some of these harsh realities, many reopening plans have missed the mark. While Quinnipiac has excruciatingly detailed guidelines for its dorm bathrooms — no cell phones, for example — a student is far more likely to contract COVID-19 at an off-campus frat party than from bringing their phone into a dorm bathroom.

Despite these challenges, there is hope that college students will be unified by a common goal: to remain on-campus through the end of the school year. “All I want is to walk across the graduation stage,” said Lupinacci.

Peer pressure is par for the course in college, so practicing safe behavior could potentially become a trend. Agocha explains: “A group can regulate its member’s behaviors – good or bad,” and so students might actually behave more cautiously as a group than they would individually.

It is an optimistic take, but with so much at stake, perhaps students will rise to the occasion. Eliel Duquene is confident: “I trust everyone. If someone is feeling ill, they’ll get checked out. I know I will.”

As the start of the fall semester draws near, it becomes abundantly clear that the onus for safety, both on and off-campus, will fall on the students. “I think there will have to be self-policing in a group full of irresponsible college kids. There will have to be a few who are very responsible and voice concerns louder than other people,” concluded Lasicki.

If the class of 2021 wants to receive their diplomas in-person, then they will have to listen carefully to the voices of the responsible few.

Jessica Freedman of Stamford is a Bill Cibes Journalism intern for the Connecticut Mirror.