You can ignore reality and you can deny reality, but you can’t escape Connecticut’s reality.

On January 19, State Senator Catherine Osten (D-19th District) published an op-ed in which she states: “There is some very good news happening in Connecticut right now,” and goes on to cite two recent reports from the State Office of Fiscal Analysis and the State Comptroller,1 both of which she claims are “full of good news” about what she calls “Connecticut’s financial rebound.”

With all due respect, Sen. Osten is clearly missing the forest for a few carefully selected trees, and that is a problem for Connecticut because she is the Chair of the Assembly’s powerful Appropriations Committee.  We respond below to each of her five claims.

Sen. Osten also notes that, in contrast, government jobs are up 19,000 in Massachusetts since January 2010, but she does not explain that, unlike Connecticut, our neighbor is growing strongly. Sen. Osten may not realize that total nonfarm jobs in Massachusetts are UP 11% from their previous 2008 peak of 3.33 million, while total nonfarm jobs in Connecticut are DOWN 1% from their 2008 peak of 1.72 million.

Finally, Sen. Osten does not address the negative trend in the mix of jobs in Connecticut, which is shifting from higher-value-added positions to lower-value-added service jobs. Another recent report2 from the State’s Office of Policy and Management (OPM), which Sen. Osten received in November, states:

Employment growth since the recession has . . . been skewed toward lower-wage industries, especially when compared to the jobs lost during the recession. 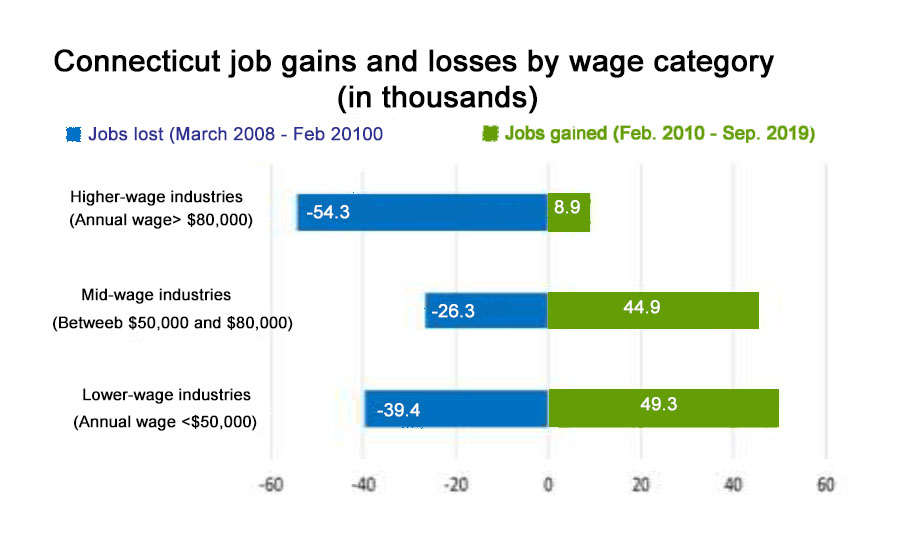 A REALITY WE CAN’T ESCAPE: Connecticut’s ongoing inability to create new, well-paying jobs in a state with a very high cost of living is a very serious problem.

2. State spending growth in recent years has indeed been lower than the national average, but this happened primarily for two reasons that should not give anyone confidence about Connecticut’s.

First, for many years spending increased much faster than the national average. Over the entire 1988-2019 period when Connecticut failed to generate any net new jobs, state spending more than tripled (up 256%) from $6 billion to more than $21 billion versus only a doubling in the C.P.I. (up 116%). So, despite the spending slowdown in recent years, and despite no job growth, state spending has increased more than twice as fast as the rate of inflation (2.2x). Moreover, this huge increase in spending would have been far greater if the state had not kicked two huge cans down the road: the funding of retirement liabilities and proper maintenance and improvement of its infrastructure.

Second, after its long spending binge, the state has been forced by huge deficits to curtail spending. Those huge deficits resulted from weak growth in tax revenues (remember, no job growth) combined with rising fixed costs, particularly the mounting costs of funding those deferred retirement liabilities. As Governor Malloy’s Office of Policy and Management Secretary Ben Barnes stated in November 2014 with unusual candor: “We have entered into a period of permanent fiscal crisis in state and local government, it seems.” Lest anyone think we are now “out of the woods,” her own source (i.e., the non-partisan Office of Fiscal Analysis) states very clearly in the Executive Summary of its report: “OFA is projecting deficits in FY 22 ($757 million), FY 23 ($1.2 billion) and FY 24 ($917 million).” Although the country is currently experiencing the longest time period between recessions in its history, and although the stock market is at or near historic highs, it is important to note that these official deficit forecasts assume that we will not have a recession and that the stock market will keep rising.

A REALITY WE CAN’T ESCAPE: Connecticut’s serious ongoing fiscal challenges can only be solved with even tighter control of spending as a precondition for generating the stronger economic and job growth we so desperately need; continuing to raise taxes on the people and business that are still here will have the opposite effect.

3. As Sen. Osten notes, State savings are projected to reach a record level of ~$3 billion in FY21, and that is definitely a good thing, even though it is disingenuous for Sen. Osten to claim that Democratic legislators deserve credit for this achievement. The so-called Rainy Day Fund has surged because the stock market has been booming, because there was a $1.3 billion revenue windfall due to federal tax law changes, and because the only bi-partisan budget in memory in FY18 created a “Volatility Cap” that required revenue above a certain threshold to be transferred to this fund.  The fund can be used to cover future deficits (subject to various conditions), and coincidentally, the OFA estimates that ~$3 billion will be needed to offset two years of revenue loss from a moderate recession.

A REALITY WE CAN’T ESCAPE: Connecticut will probably need all of its savings to offset its projected loss of revenues in the next recession.

4. Sen. Osten notes that “according to state tax returns, the number of Connecticut residents declaring incomes in excess of $1 million per year has grown by 8 percent since 2014.” She does not explain that, thanks to a booming national economy and stock market, only Louisiana, West Virginia and Alaska have lower growth rates in the number of million-dollar taxpayers. 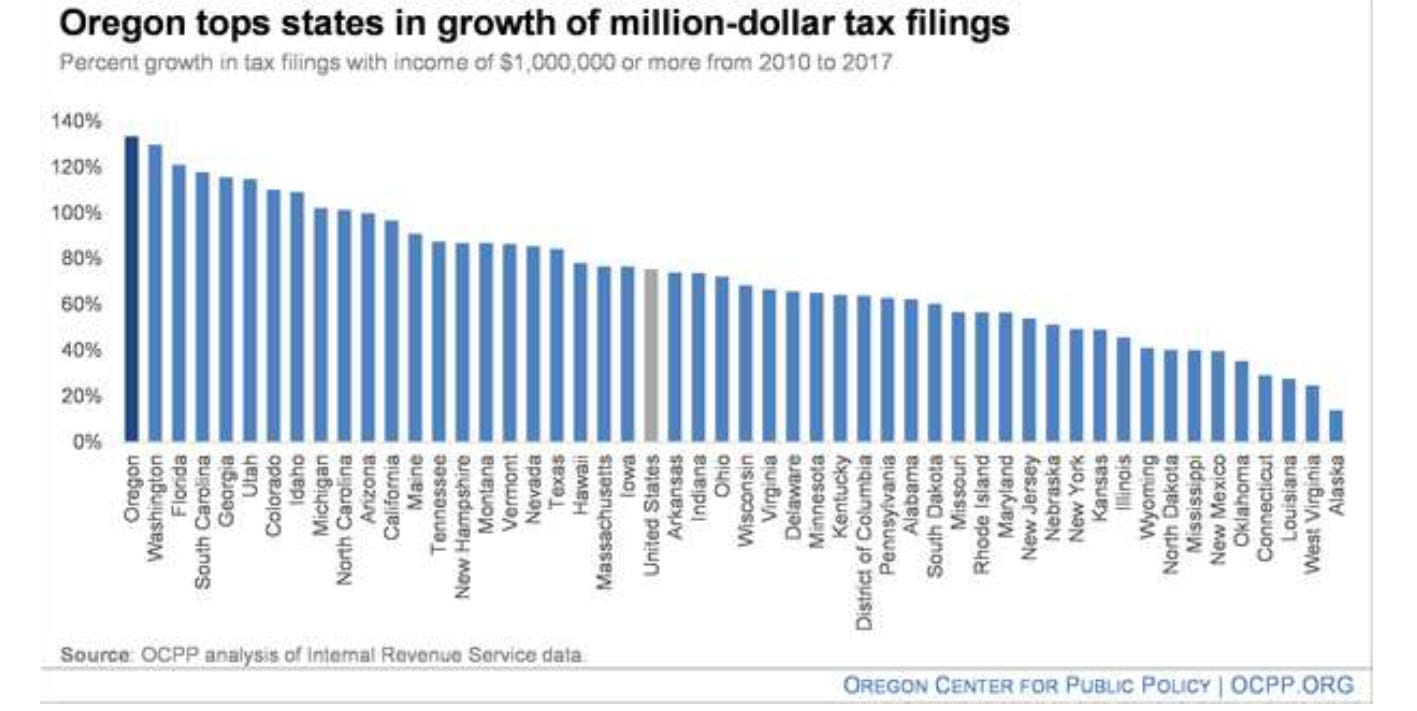 5. Sen. Osten also notes that “Connecticut also has one of the highest concentrations of millionaires and billionaires per-capita (top 3) of any state in America . . .” Unfortunately, Sen. Osten does not seem to understand that Connecticut is losing ground to other states as more and more resourceful people and companies are deciding to generate jobs and economic growth somewhere else, and that even rich states can fail in a highly mobile society when there are many others that offer high qualities of life and a far more favorable personal and business economic environment.

Sen. Osten claims that Wall Street “ranks CT highly” because the “three biggest bond rating agencies — Standard & Poors, Moody’s Investors Service, and Fitch — have recently assigned various “A” ratings to Connecticut’s general obligations bonds.” She does not explain that Connecticut currently has the lowest bond ratings (A1-Moody; A-S&P; A+-Fitch) among the 50 states except for Illinois and New Jersey. In its December report on Connecticut, Moody’s said as follows: “Connecticut ranked 49th for employment growth [from 2008 to 2018], with lower-wage jobs accounting for much of the growth. An inefficient transportation infrastructure remains a hindrance. The hobbled economy places the state at a disadvantage when competing with other states for business and residents. Connecticut’s economy will remain hampered by a declining and aging population that gives the state one of the weakest population and labor force profiles in the country. The demographic trends weigh on the state budget, as the pool of taxpayers fails to keep up with the costs of servicing the state’s large pension burden.”

A REALITY WE CAN’T ESCAPE: Connecticut’s bond ratings are still among the worst in the country.

Finally, Sen. Osten should study carefully this table (from the November OPM report), which compares Connecticut’s results very unfavorably to those of other New England states (and even moreso the country) since the Great Recession, and which is accompanied by the following  comments:

“Connecticut’s real gross state product (GSP), which is a measure of all goods and services produced in Connecticut . . . continued to fall even after the end of the recession and currently stands below 2006 levels. Connecticut’s total population also fell by 0.4% between 2013 and 2016 but held steady from 2017 to 2018.”

In summary, if Sen. Osten reads her reports more carefully, as presumably the chair of the Appropriations Committee should, she will find that they are not “full of good news,” and that Connecticut is still a failing state with some very serious structural problems to solve.

Three fallacies and the truth about vaccines