You have a national park in the ocean, and it’s in jeopardy

When you think of national parks, you probably think about vast stretches of green spaces where the daily routines of nature play out unaltered by human activities. But America also has “blue parks” to protect very special areas of our ocean, and the newest is off the coast of New England.

The Northeast Canyons and Seamounts Marine National Monument —the first monument of its kind off the east coast of the U.S.— has canyons deeper than the Grand Canyon and mountains higher than anything east of the Rockies that rise from the deep ocean floor. These dramatic geologic features, stretching from the shallows of Georges Bank down to the deep abyss, form the foundation for a spectacular ocean wilderness and a treasure trove of diverse marine life. As marine biologists, we have devoted our lives to studying ocean ecosystems around the world, and we recognize the uniqueness of this place.

Among these canyons and seamounts, there is an incredible diversity of deep sea coral species, extremely fragile and sensitive to disturbance, some with tall tree-shaped colonies that have been growing since the Middle Ages. Top predators like sharks, tunas, sperm whales, and dolphins hunt for the abundant prey that congregate in and around the canyons and over the seamounts. Otherworldly deep sea fishes, sea turtles and Atlantic puffins, are all important parts of the web of interactions that stretch from the ocean surface to the seafloor.

The current administration is considering rolling back protections for this extraordinary part of our ocean. When it was designated as a national monument a little over a year ago, the Presidential proclamation prohibited drilling, mining, and commercial fishing (although lobster and crab trap fisheries have seven years to leave the monument area), while recreational activities such as whale and bird watching, and recreational fishing, can continue. But recommendations to the White House, made public by Secretary of the Interior Ryan Zinke, recommend opening the canyons and seamounts marine monument to commercial fishing, an action that would completely defeat the purpose of this monument. 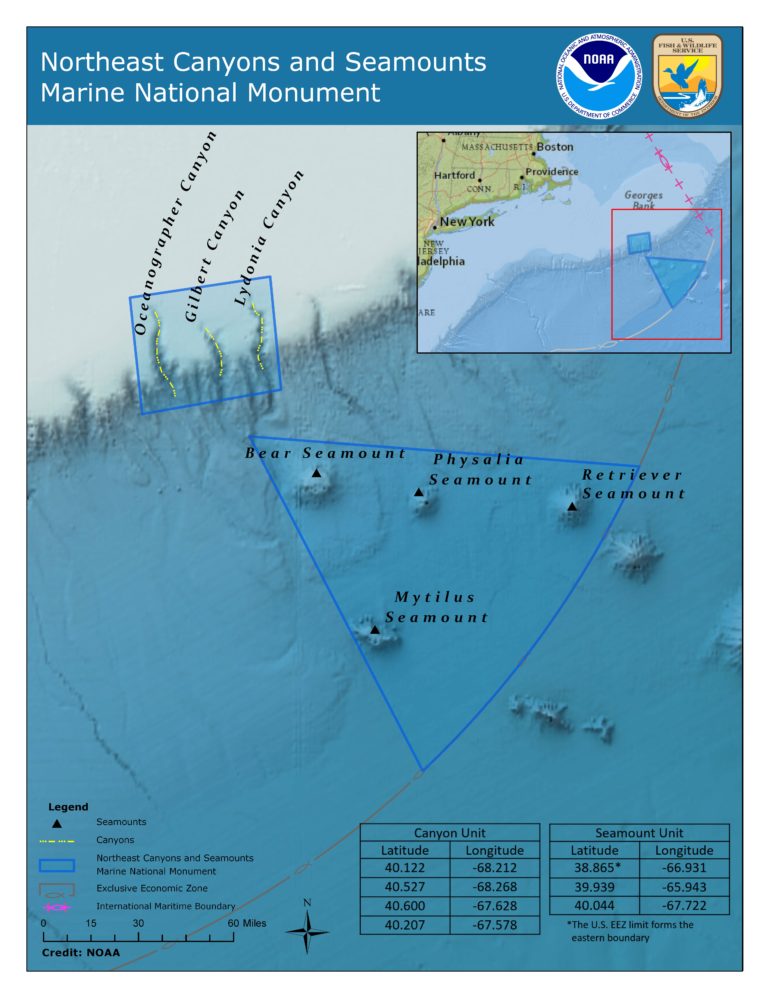 Commercial-scale fishing is not a benign activity —especially in a highly sensitive environment like this. Having spent decades at sea, we have seen how fishing gear dragged over the seafloor can destroy corals and other vulnerable marine life. Fishing lines can entangle and incidentally capture and kill marine mammals, seabirds, and sea turtles, many listed as threatened or endangered.

Huge fishing nets collect and remove massive amounts of fish and squid that otherwise serve as the focus for a complex deep ocean food web. Notably, this monument will be the only entanglement-free and bycatch-free zone off the entire Atlantic coast after lobster and crab gear move elsewhere.

The return of all commercial fishing gear would eliminate any protections that animals as diverse as deep sea corals and sperm whales enjoy in the monument. Ironically, in spite of the hyperbole about economic damage to fisheries imposed by the monument, both NOAA and the fishing industry’s independent analyses show that the economic effects are “minor” – about one half of 1 percent of revenue for the State of Massachusetts and even less for Rhode Island and Connecticut. Indeed, the analyses do not consider that revenue could be recovered by fishing outside the monument, since allowable catch levels will not be affected.

The Canyons and Seamounts area is the only part of the U.S. Atlantic Ocean protected from all commercial extraction. As scientists, that level of protection allows us to study ocean life in the absence of human disturbances, essentially showing us how nature is supposed to work without interference. Much like climbing up mountains and finding different life zones, descending into the depths of the monument crosses habitats that contain different communities of animals.

Given the extreme depth ranges and topography, the monument packs an incredible diversity of species and communities in a relatively small space. Because of this, it will be especially important in understanding the effects of climate change versus other forms of direct human impacts that will continue to occur outside the monument. Further, the area is a hotbed of ocean discovery, as we continue to find new species in this region.

Protecting this wild ocean place in perpetuity is a gift to the American public, as valuable as Acadia, Yosemite, or Yellowstone National Parks. We deserve to pass such places on to our children, and to theirs far into the future –a place where whales can hunt with their young undisturbed, and coral forests in brilliant colors stand tall like old growth forests for millennia to come. For all these reasons, and many more, we strongly encourage that the original protections are upheld to safeguard this exceptional part of the ocean from commercially extractive activities.

Peter Auster is a Senior Research Scientist at Mystic Aquarium. Scott Kraus is Vice President and Senior Science Advisor in the Anderson Cabot Center for Ocean Life at the New England Aquarium, Boston.