CT Mirror and CFECT invite experts to explore how news consumption is shifting and what that means for you. 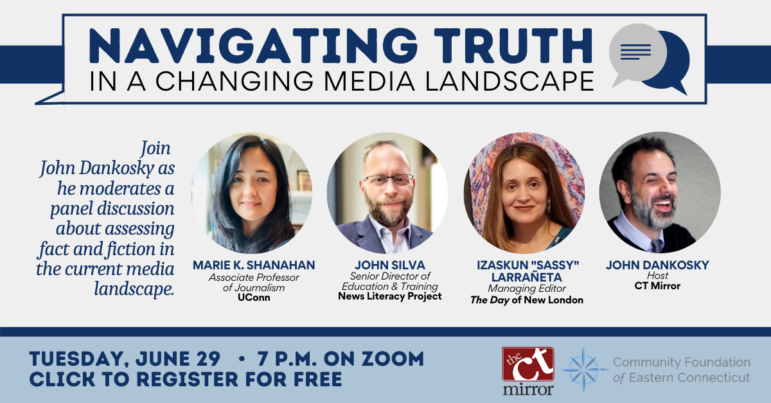 John Dankosky moderates a panel discussion about assessing fact and fiction in the current media landscape. They explore strategies that media consumers can adopt, and ask:

John Silva, Senior Director of Education and Training at the News Literary Project

John Silva joined NLP in March 2017 with 13 years of experience as a middle and high social studies teacher with Chicago Public Schools. He first became involved with news literacy in 2014 when his students engaged in NLP’s original classroom program. A U.S. Marine Corps veteran, John spent several years in corporate telecommunications positions before deciding to become a teacher. He graduated from the University of Illinois at Chicago with a bachelor’s degree in the teaching of history and has a master’s degree in education, with a concentration in e-learning, from the University of Illinois at Urbana-Champaign. He became a National Board Certified Teacher in 2012.

Marie K. Shanahan is an associate professor of journalism at the University of Connecticut. Her academic research and teaching focus on the intersection of journalism and digital communication technology. Shanahan studies trends in digital discourse, online commenting on news sites and on social media, online reputation, digital news ethics and local news engagement. She is the author of Journalism, Online Comments, and the Future of Public Discourse (Routledge, 2018). Shanahan’s research has been published by The Poynter Institute, Nieman Journalism Lab, Columbia Journalism Review, The Chronicle of Higher Education, The Conversation and The Hartford Courant. Her writing has also appeared in Newsweek, Salon, Christian Science Monitor and Editor & Publisher.

In 1999, Izaskun (Sassy) moved to Connecticut to start working for The Day newspaper in New London as a town reporter. During her tenure there, she covered several beats, including courts, police and breaking news. Sassy has covered critical issues like eminent domain in New London, the state’s last death penalty execution and  uncovered and wrote about a mortgage scam that led to two high profile federal convictions. She has received numerous recognitions, including two Publick Occurrences awards. In 2016, she was promoted to Deputy Managing Editor, where she oversees The Day’s newsroom, guiding reporters and daily news coverage. In 2018, she was honored as the Latina of the Year by the Hispanic Alliance of Southeastern Connecticut and La Latina Network.