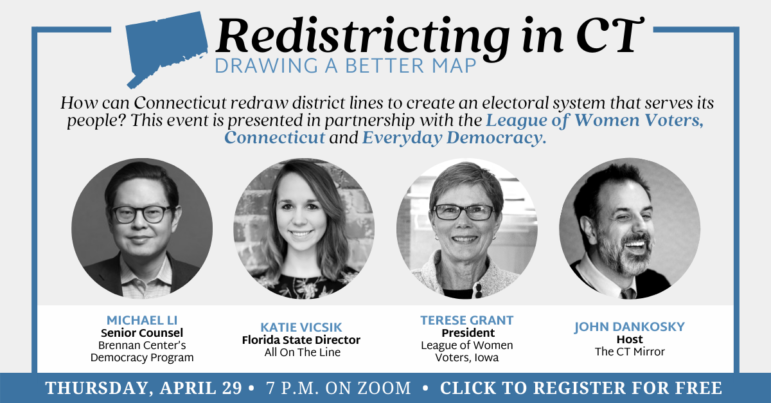 The 2020 Census gives Americans a chance to redraw their district lines, fundamentally shifting the map of Democracy. But is our system set up to provide the kind of change necessary? How can Connecticut use this opportunity to create an electoral system that serves its people? Join the Connecticut Mirror’s John Dankosky in conversation with national redistricting expert Michael Li from the Brennan Center, and voting advocates from states with very different redistricting systems, in this timely virtual conversation.

This event was presented in partnership with the League of Women Voters, Connecticut and Everyday Democracy

His work focuses on redistricting, voting rights, and elections. Li was the author of a widely cited blog on redistricting and election law issues that the New York Times called “indispensable.” He is a regular writer and commentator on election law issues, appearing on PBS Newshour, MSNBC, and NPR, and in print in the New York Times, Los Angeles Times, USA Today, Roll Call, Vox, National Journal, Texas Tribune, Dallas Morning News, and San Antonio Express-News, among others.

Katie Vicsik, Florida State Director for All On The Line

Katie Vicsik leads a statewide program to create awareness and action around the redistricting process via strategic partnerships and grassroots engagement. Katie has prior campaign experience in Florida, working on President Obama’s 2008 and 2012 campaigns, as well as serving as the Florida State Director at Enroll America, an issue-based campaign that educated would-be insurance consumers, and increased enrollment in health coverage under the Affordable Care Act.

Terese Grant, President of the League of Women Voters, Iowa

Terese was Director 2017-19. She was introduced to League by attending local forums and eventually joined the Grinnell League because she could see that the League cared about many of the same issues as she did.  She states, “I was also very impressed with the talented and intelligent people that I met through League.”  After joining she was asked to be in charge of Voter Services.  Currently Terese serves as Co-President of the Grinnell LWV.  She continues to be impressed and inspired by the work of LWV at local, state and national levels.  By profession Terese is a French teacher, now retired. She has taught in public and private schools in Iowa and New Jersey.  She and her husband, Warren, also taught at international schools in Dongguan, China and Kiev, Ukraine.   They have two sons who are also teachers.

This event was hosted on Zoom