No, generous unemployment benefits are not driving the labor shortage 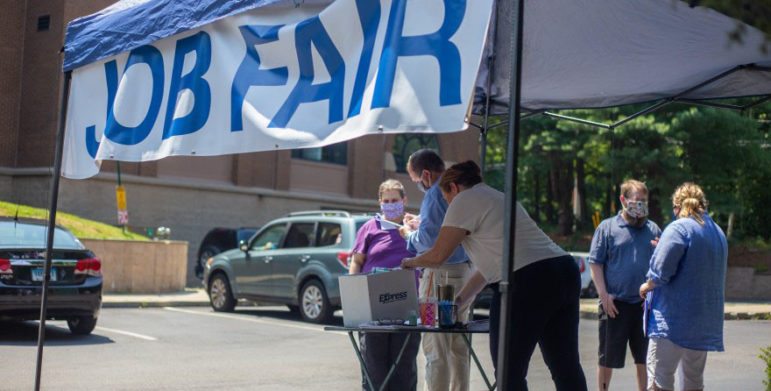 Connecticut has 103,000 fewer jobs now than it did before the pandemic. At the same time, “help wanted” signs seem to be in the windows of every store and restaurant. Conventional wisdom blames this labor shortage on overly generous federal unemployment benefits. Such benefits can pay nearly as much as an hourly worker’s salary but are taken away upon accepting a job, making it reasonable to believe they could discourage a return to work. However, recent research shows that the impact of these benefits is likely small.

The idea that unemployment benefits discourage work is an old one that economists have considered for decades. Businesses provide a range of anecdotes about workers turning down job offers. Even Democratic Gov. Ned Lamont was skeptical about re-authorizing $600 federal unemployment in July of last year because of worries it could hamper an economic recovery. He later offered $1,000 to new hires on unemployment to provide an incentive for them to return to work.

In contrast, previous workers in service and leisure jobs argue that the pandemic fundamentally changed their values. Their old jobs were characterized by 80-hour work weeks, where they faced the constant possibility of sexual and physical harassment during a horrifying pandemic, for a barely livable wage that has stagnated over the past 30 years. Fears of the pandemic continue to concern some workers and have led to an early retirement for other older workers.

As a labor economist I turn to quantitative economic research to offer an objective lens to vet contradictory views. I have followed such work with great interest and a number of recent studies show that the expiration of extended federal benefits is unlikely to have had much of an impact on the return of workers.

One recent study found that the $300 increase in benefits in January 2021 decreased employment by only 0.3% to 0.5%. Several additional papers found a similar magnitude of impacts of the expiration of the $600 federal benefits earlier in the pandemic. These findings are consistent with work that has found smaller effects of unemployment insurance on the return to work in severe recession and no impacts when the benefits were first implemented at the start of the pandemic.

Further, roughly half of U.S. states ended the $300 extended benefits in June, providing a sort of experiment for economists in which they can compare changes in employment in those states that ended the benefits early relative to those that kept them. Preliminary work by Arin Dube suggests there were no major differences in employment patterns between these two groups of states. This analysis is important since earlier work was done before vaccines were widespread. As vaccines drove a recovery this summer, the number of job vacancies across Connecticut grew. Still, even when new job hires were heating up, the change in benefits at didn’t seem to matter.

I did a back of the envelope calculation, applying the largest effects on employment of these benefits found in this research to Connecticut. Suppose Governor Lamont had ended the $300 extended benefits to the Connecticut labor market: given employment was about 1,593,000 in June cutting the benefits would have at most resulted in a 0.5% increase or 7,965 additional hires. This impact isn’t nothing but is clearly a small portion of the 100,000 still missing since the start of the pandemic.

Ultimately, these results suggest that a range of other factors are responsible for the stalls in the economic recovery: a lack of child-care from school closures, fear of getting Covid, early retirements, and supply chain bottlenecks. Lamont’s decision to keep these benefits was the right decision: my own work shows that the extended benefits offered important help to lower income workers who tend to receive less insurance from the safety-net.

The good news in terms of the recovery is that many of these problems are gradually being worked out: as was seen in the surges in job hires in July. The bad news is that since these irregularities are caused by the pandemic and not policy, the surging delta wave could thwart the state’s gains if it is not carefully navigated.

David Simon is an Associate Professor of Economics at the University of Connecticut; National Bureau of Economic Research.