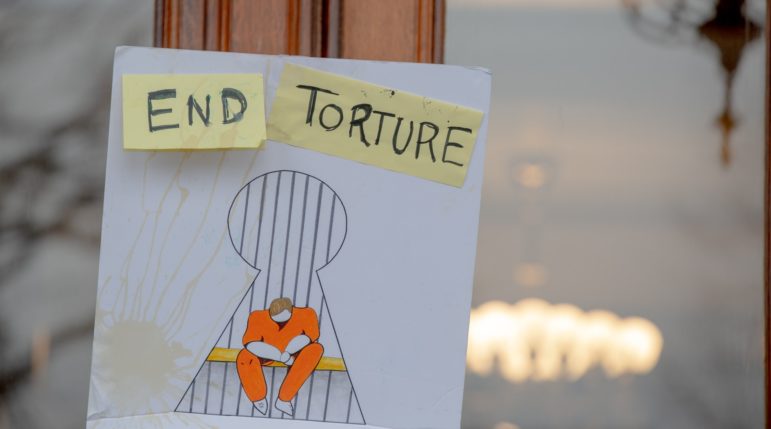 A sign asking to stop solitary confinement in prison is posted outside the Connecticut State Capitol.

When I think about the solitary confinement unit that I oversaw, the first thing I remember is the sound. Constant banging on cell doors, jangling keys, and most of all, people yelling from their single cells. Whenever I toured the unit, people would shout to me: “Warden! Warden! I need to talk to you!” I always stopped to listen. But moments of compassion can only do so much in an environment where people are locked up 23 hours per day. I saw incarcerated people break down, brought to the point of mental health crisis by the extreme environment. Staff suffered too; even I was traumatized.

I began working in the Department of Correction (DOC) as a volunteer with the Sisters of Mercy in 1977. Over the course of my 27 years in the DOC, I moved up the ranks, eventually becoming a warden. I worked in six different facilities across the state, including in Cheshire, until my retirement in 2002. In the years since, investigations have uncovered that the DOC continues to practice abusive solitary confinement. They’ve shown that the same conditions that traumatized me years ago persist today.

Walking through some of the solitary confinement units that I oversaw, I could feel the dehumanization and trauma inflicted on human beings, mostly Black and brown. They spent 23 hours per day in their cells and one hour out. In one facility’s solitary unit, when incarcerated persons went to the showers, they would be escorted one at a time, shackled at their hands and feet, and locked into the shower. It seemed to me that many were sent there simply because their mental illnesses made them difficult to manage.

Toward the end of my time in the DOC, I worked in Manson Youth Institution (MYI) in Cheshire, where 16-, 17-, 18-year-old kids were locked in isolation. Far from the “worst of the worst,” the people I met in solitary were simply human beings trying to survive an inhuman environment. I remember one young boy who coped with solitary at MYI by spending all day watching a mother bird nesting with her babies outside his tiny cell window.

In the 1990’s, the DOC went to great lengths to establish the punitive model of incarceration. Facility administrators were unable to swim against the tide because of the DOC’s iron-clad requirements placed on them. Many of the current practices have their roots in that period, which now goes back over 25 years.  I believe that the public’s perception of the usefulness and function of incarceration has changed significantly since that time. The DOC’s management practices should change too.

Solitary confinement is considered torture by the UN, and it still exists across the Connecticut state prison system. If there is one thing I know from my 27 years of experience in the DOC, it is that torture causes only harm. I never saw solitary confinement rehabilitate someone or make a facility safer. Instead, I saw it break people, traumatize people, incarcerated individuals and staff alike. I didn’t recognize the trauma I myself experienced until I realized that many of my dreams were about being locked in solitary, alone, with nothing but the banging and the yelling of people locked nearby for company. Working in such extreme conditions, I understand why correctional officers have PTSD at twice the rate of military veterans.

This year, the legislature has the opportunity to end this torture and make sure it never comes back. SB 1059 would end long-term isolation, unnecessary and abusive shackling practices, and implement an oversight system for the DOC, among other essential changes. These are crucial measures to protect the safety and dignity of people who are incarcerated––as well as the staff who work in correctional facilities. Ending long-term solitary confinement, a practice that studies suggest does not improve prison safety, poses no risk to DOC staff. In fact, the far greater threat to staff is the status quo.

Speaking as a longtime DOC employee, I want to be clear: no one should advocate to continue long-term solitary confinement in our name. By clinging to harmful and outdated practices, the DOC is likely causing serious harm to its own staff. Inflicting torture on incarcerated persons hurts us all and protects no one. The Connecticut legislature must pass SB 1059.

Mary Morgan Wolff worked in the Connecticut Department of Correction for 27 years, including as a prison warden.