Gov. Dannel P. Malloy once enjoyed the support of the state’s large teachers’ unions, but union leaders turned to other leading Democrats Tuesday in an effort to block the governor’s proposals to reform public schools.

Top Democrats, including Senate President Pro Tem Donald E. Williams Jr., one of the governor’s most important legislative allies, spoke to an estimated 1,000 teachers at the state Capitol during a noisy union-sponsored rally opposing the governor.

Busloads of teachers from across the state arrived in Hartford in the late afternoon and early evening to oppose a plan that many fear would threaten their jobs, diminish union bargaining rights and ignore their voices.

“Most of what the governor has proposed attacks teachers and our profession and does little to close the achievement gap,” said Phil Apruzzese, president of the 43,000-member Connecticut Education Association, the state’s largest teachers’ union.The CEA and the American Federation of Teachers-Connecticut have vehemently resisted Malloy’s plan and expressed support instead for a revised reform bill adopted by the legislature’s Education Committee.

The Education Committee altered the governor’s bill, removing some provisions that had been criticized by the unions, including a proposal that would have linked a new, more rigorous teacher evaluation system to decisions on pay and tenure. Apruzzese called that “the most onerous of all his proposals.”

Apruzzese praised elements of the Education Committee’s bill, including an expansion of the number of preschool seats and funding for family resource centers in needy districts, saying the revised bill “is cause for optimism.”

Malloy, however, has repeatedly warned he will not sign the bill in its present form. The governor and legislative leaders are in talks in an effort to reach a compromise.

Among those supporting the Education Committee’s version of the bill was Williams, the top Senate leader. “These legislators are getting it right,” he said.

Until now, lawmakers have been reluctant to comment on their stance on specific reforms, but the appearance at the rally of Williams and two other Democrats — House Speaker Christopher G. Donovan and Education Committee Co-Chairwoman Sen. Andrea L. Stillman — signaled that they will take into account the concerns of teachers as negotiations proceed on the final form of the legislation.

“We cannot fix schools without listening to the people who teach our children,” Williams said.

Teachers at the rally sported red “We Teach” stickers and carried signs saying, “Stand Up for Education.”  Some said the governor’s plan, which is designed chiefly to turn around the state’s lowest-performing schools, unfairly targets teachers.

“I don’t appreciate the demonization of teachers,” said Carol Goldstein, a teacher at Lyman Memorial High School in Lebanon. 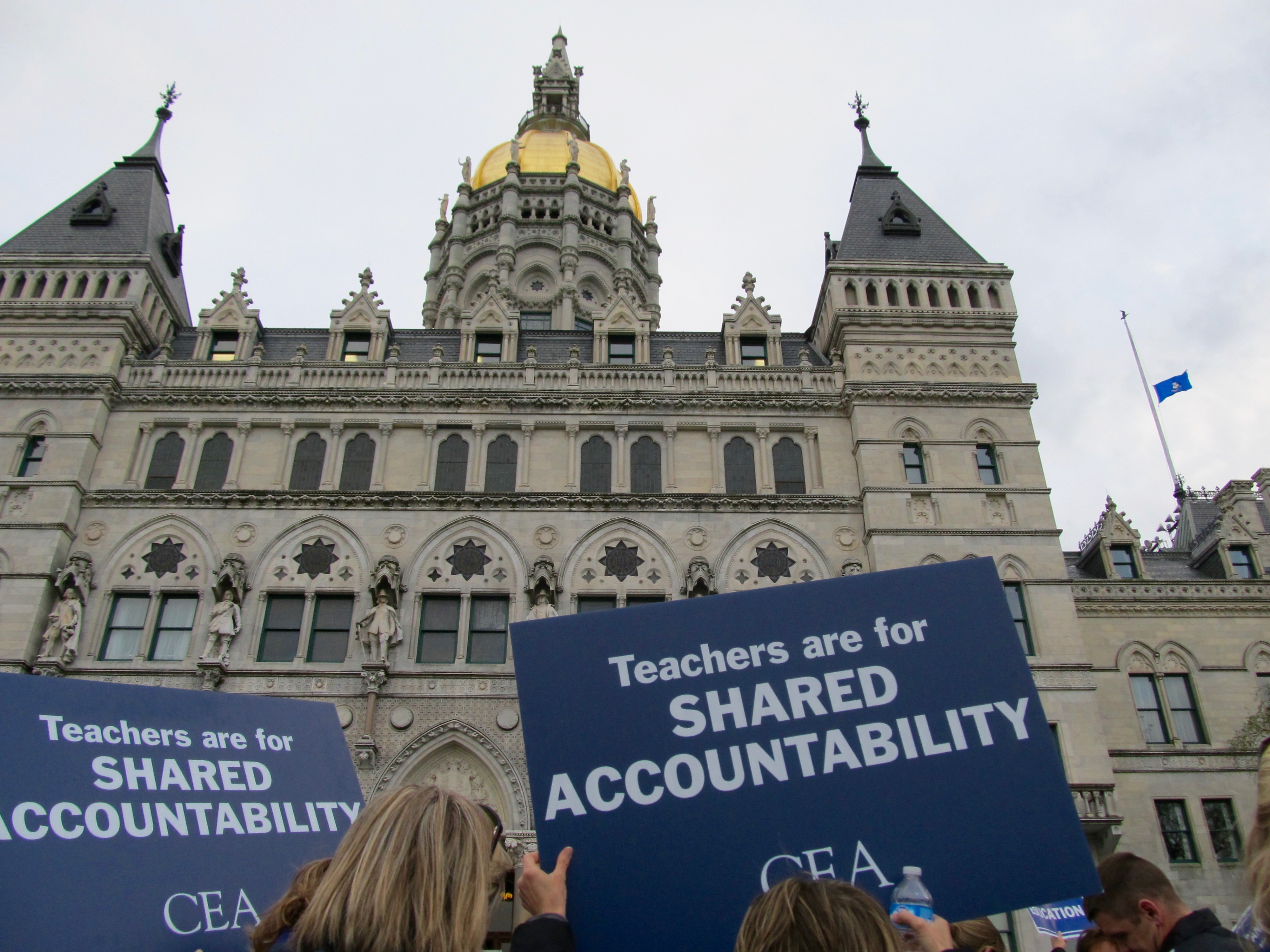 Teachers rally outside the state capitol against Malloy\’s education bill

Tim Zeuschner, a South Windsor High School teacher, opposed a Malloy proposal that would have given the state education commissioner broad authority to intervene in low-performing schools by altering schedules, assigning personnel and making other major changes without union approval.

“It’s antithetical to local control of education. You’re taking away any kind of accountability,” he said.