Even if permitted, fracking waste unlikely to come to CT 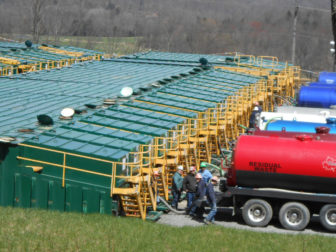 Despite the clamorous efforts of the environmental community, legislation to ban the waste from gas and oil fracking operations from coming into Connecticut will fail this legislative session.

But regardless of how a competing bill that could allow it in for treatment and disposal in the future fares, industry experts, environmental officials and even companies that could profit from treating the waste agree that the chance of such waste coming to Connecticut is roughly zero.

“Doubtful. It’s so much more expensive,” said Jeanne VanBriesen, a professor of civil and environmental engineering at Carnegie Mellon University in Pittsburgh, where she is also director of the Center for Water Quality in Urban Environmental Systems.

VanBriesen has studied the fracking waste of the Marcellus shale that extends beneath her state into New York. Connecticut has its eye on Marcellus gas as the source for a cleaner and cheaper heating fuel than the oil and propane most of the state now uses.

“The transport cost exceeds the disposal cost,” VanBriesen said of the idea that companies would send their waste all the way to Connecticut. Add in pricey regulation, and she agreed that the result would be a policy that keeps the waste out.

Fracking waste is what’s left after vast quantities of water laced with a chemical stew are shot through rock to extract deeply imbedded natural gas and oil. The wastewater contains residue from the chemicals, which fracking companies have generally considered part of proprietary formulas and declined to disclose. It also contains rock solids that in turn contain any number of natural substances from the benign to the harmful. This would include large amounts of salts as well as naturally occurring radioactive material – referred to as NORM.

The simplest, least expensive and most popular methods for handling the waste is injecting it deep into the ground for storage, reusing it or putting it in retention ponds. Treating it so it can be discharged into water the way wastewater generally is, is the most difficult and expensive option – but not impossible.

Fracking waste is exempt from national hazardous waste regulation, which means without additional state regulation it does not require special treatment. It is also exempt from the Safe Drinking Water Act, which typically affects water sources near drilling sites. But it is still subject to the Clean Water Act, which means fracking waste needs to meet those standards before it can be discharged into a water body from a treatment facility.

Part of the cause of the fracking waste controversy are cases where untreated or minimally treated waste was discharged into water, as occurred in Pennsylvania for a number of years. With regulations similar to those Connecticut may consider, that has largely stopped.

While most of the fracking waste in Pennsylvania is handled through deep well injection, one company, Eureka Resources, has begun treatment and disposal operations in three locations.

Eureka uses a variety of processes including distillation, which is similar to how salt is removed from seawater to make it drinkable. Environmentalists familiar with Eureka’s system like it.

“Treatment and discharge is not necessarily the worst way to deal with it,” said Myron Arnowitt, the Pennsylvania state director for Clean Water Action, who had fought Pennsylvania’s unregulated fracking waste dumping. “Distillation is a process that’s going to get everything.”

Even though there’s solid waste residue and some air emissions: “In terms of what actually gets discharged into the body of water – it’s pretty good,” he said.

If fracking waste were to be allowed into Connecticut, the plan would be to declare it hazardous and therefore subject it to stringent controls. There are only three facilities in the state capable of handling hazardous waste. Two, one in Bridgeport and the other in Meriden, are owned by the Spanish company Tradebe. The third, in Bristol, is owned by Clean Harbors, a Massachusetts-based company with 300 facilities in North America.

All three are pre-treatment facilities. That means they partially treat wastewater and then discharge it to a municipal wastewater treatment facility that finishes the job, discharging the resulting water into rivers. Remaining solids and sludge are sent to landfills – usually out of state – incinerated or, in some cases, turned into fuel to run the wastewater plant.

“Working with municipalities – it’s a given,” said Oswald Inglese, director of the water permitting and enforcement division of Connecticut’s Department of Energy and Environmental Protection. “We, as a matter of practice, always coordinate and review the discharges that are coming in.”

Incoming waste shipments are tested for content by pre-treatment plants to make sure the materials are eligible to be processed. The odds are extremely low that fracking waste, with its potential for containing hundreds of substances, would contain only what the plant is permitted to handle.

And that’s one reason why speculation that fracking waste is already coming into the state because it’s not regulated as a hazardous waste has been widely discounted.

“We tend to think that it’s not coming in,” said Yvonne Bolton, DEEP’s bureau chief for materials management and compliance assurance.

Phil Retallick, senior vice president for compliance and chief regulatory affairs officer for Clean Harbors, said he is sure no one is sneaking fracking waste in.

“We’re very careful about asking origin of waste, where it’s from, composition of chemicals,” he said. “If it were shipped, we would be able to detect the salt content.”

To handle fracking waste Clean Harbors and the other plants would need to modify their licenses. Inglese said radioactive materials would not be difficult to deal with. In fracking waste, radiation exists naturally as radium and uranium in the pieces of fractured rock. Those can easily be separated out.

Retallick said Clean Harbors already has on-site Geiger counters. “If we see something above background (radiation levels), we would ask a lot of questions,” he said. But he said what was really needed is national standards for NORM found in drilling waste.

The various salts in fracking waste are not hazardous and wouldn’t normally be treated. But in such high quantities, they can cause problems if discharged into fresh water.

Another problem occurs if the salt, especially bromide, comes in contact with chlorine, often used to purify wastewater. Chlorine and bromide can form a toxic byproduct that is not suitable for discharge.

Salt removal – like Eureka is doing in Pennsylvania — is energy intensive and expensive. Add on the cost of transporting fracking waste from even the closest states and the cost becomes prohibitive.

Even so, Retallick said Clean Harbors might consider it in Connecticut. “We’re certainly interested, but we would have to do technological and equipment upgrades in the plant,” he said. “It really would require a lot of co-ordination between DEEP and the local wastewater treatment plant and, finally. the public.

“We certainly don’t want to do anything that the public wouldn’t be on board with,” Retallick said.

Brian Fowkes, the assistant director of public works in Bristol, which operates the plant that handles Clean Harbors’ discharge, said if the state developed fracking waste regulations, his department would be willing to evaluate them.

But Retallick felt all of it was probably moot. “My professional instincts tell me Connecticut is not going to see a lot of frack water,” he said.