The vast majority of Connecticut adults say their health is good, very good or excellent — even though nearly half have diabetes, hypertension, asthma, heart disease or cancer, according to a recent survey.

And while Connecticut’s overall population ranks similar to or better than the nation as a whole on many health indicators, blacks and Hispanics in the state fare far worse than their white counterparts.

The findings are part of the Connecticut Health Care Survey, a sampling of state residents funded by six foundations. The data is intended to serve as a baseline to measure changes in the population’s health and to inform health policies.

The interviews with 5,447 state residents were conducted between June 2012 and February 2013 — before the expansion of health care coverage that began this year as part of the federal health law known as Obamacare. The raw data isn’t expected to be available until June, but information from the survey is available in issue briefs produced by some of the foundations.

Here’s what the survey found:

Most patients say their doctors don’t ask about barriers to being healthy.

Only 28 percent of survey respondents said their health care providers had talked about things that make it hard to take care of their health. The rate was even lower — 22 percent — for children.

Experts say it’s important for health care providers to take into account the challenges patients face, since they can affect how well patients will be able to follow medical advice.

“Providers might not be providing families with the kinds of counseling that they can really act upon themselves, because they haven’t taken the time to find out their barriers to receiving care or changing their eating habits or getting exercise,” said Lisa Honigfeld, vice president for health initiatives at the Child Health and Development Institute of Connecticut. “That really is a very important finding in this study.”

Children are better off than adults when it comes to health care.

The vast majority of children covered by the survey are considered to be in good, very good or excellent health, according an analysis by the Children’s Fund of Connecticut.

The Children's Fund of Connecticut

Only 2 percent of children were reported as being in fair or poor health.

Other indicators that pleased experts:

Still, the survey identified some gaps in health care for children.

Although 34 percent of children were identified as being overweight or obese — similar to national rates — many parents reported that they had not received counseling about topics important to avoiding obesity, Honigfeld noted. One in three parents indicated their children’s health care providers had not discussed exercise with them, and nearly half said they had not talked about computer or television time.

Coordination between primary care clinicians and specialists also appeared to be an issue. Most children covered by the survey had not seen a specialist in the previous year. But among those who did, 40 percent of parents reported that information about the care provided by specialists wasn’t always communicated with the child’s usual health care provider.

The health of Connecticut residents varies widely by race and ethnicity. 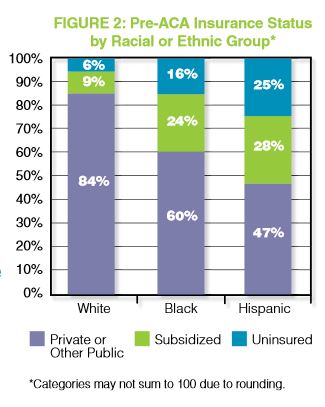 When asked to rate their health status, 87 percent of adults said it was good, very good or excellent. Only 13 percent said they were in fair or poor health.

But as with many health measures in Connecticut, the overall figures obscure wide gaps.

Twenty-four percent of blacks surveyed said they were in poor or fair health, as did 25 percent of Hispanics. Only 10 percent of whites and 5 percent of Asians rated their health as poor or fair, according to an analysis by the Connecticut Health Foundation.

Overall, 23 percent of adults surveyed were obese, lower than the national average of 29 percent. But the rates were higher among blacks (35 percent) and Hispanics (39 percent).

Blacks and Hispanics were nearly twice as likely as whites to say they had not obtained prescription drugs in the past year because of concerns about the cost.

The survey was administered before the rollout of major parts of Obamacare, which expanded access to private insurance and Medicaid. It’s not yet clear how many uninsured residents have gotten coverage and whether the expansion has affected the racial and ethnic disparities in coverage.

86 percent of adults have a usual source of medical care.

But the type of source varied. A third of blacks and nearly half of Hispanics said clinics or health centers were their usual sources of health care. Among whites, the rate was closer to 11 percent, according to the Connecticut Health Foundation’s analysis.

Seniors are more likely to have a usual source of medical care, receive coordinated care and spend enough time with the doctor.

Overall, 94 percent of people aged 65 and older had a usual source of medical care, the highest of any age group.

Similarly, seniors were most likely to report that their health care providers were informed about the care they got from specialists.

People old enough to qualify for Medicare were also the least likely to report being unable to get care or having a problem with the cost of a needed medication during the past year. Among seniors, 5 percent said they had been unable to get care they needed at some point during the previous year, compared to 11 percent of adults overall. And 7 percent of seniors said cost had been a barrier to getting a needed prescription drug, compared to 15 percent of adults overall.

Overall, about three-quarters of those surveyed reported that their health care providers spent enough time with them.

The uninsured say they’re less healthy than people with insurance. 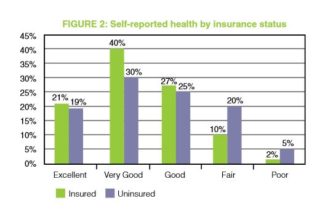 The health status of Connecticut’s uninsured has been a major question for experts trying to forecast the health needs — and costs — of those who gain coverage as part of the federal health law. Were most of the uninsured sicker than the rest of the population? Were there many people who decided not to bother buying insurance because they were so healthy?

The survey offers a glimpse at how the uninsured characterize their own health.

Twenty-five percent the uninsured residents in the survey said they were in poor or fair health, compared to just 12 percent of people who had insurance, according to an analysis by the Universal Health Care Foundation of Connecticut.

Many adults put off getting needed care, often because of cost.

Twenty-eight percent of adults in the survey said they had postponed needed medical care in the previous year. Of them, 59 percent said the main reason was concerns about cost.

People aged 35 to 44 were most likely to report problems: 38 percent had postponed care and 21 percent said worries about cost were barriers to getting needed prescription drugs.

Nearly half of adults have a chronic disease.

Forty-five percent of adults surveyed said they had been told by a health professional that they had diabetes, hypertension, asthma, heart disease or cancer. More than three-quarters of people aged 65 and older said they had one of those conditions, while among adults under 45, 28 percent did.