Tom Foley accepts the GOP endorsement. His wife, Leslie, stands with one of their twins.

Uncasville – Tom Foley, who lost a historically close election for governor in 2010, was overwhelmingly endorsed Saturday by the Republican State Convention for a second try at defeating Democrat Dannel P. Malloy, but he failed to block two rivals from qualifying for a GOP primary in August.

Danbury Mayor Mark Boughton was the only other candidate to clear the 15-percent threshold necessary for a primary at the end of the first roll call, but Foley appeared to direct supporters to switch to Senate Minority Leader John P. McKinney of Fairfield. His rationale: He was better positioned to win a three-way primary than a head-to-head race.

Boughton had 24 percent before switching began, while McKinney fell short at 13 percent. The other candidates, Shelton Mayor Mark Lauretti and Joseph Visconti of West Hartford, languished below five percent. Visconti pledged to petition for a spot on the primary ballot, while Lauretti was uncertain about continuing.

All three candidates for lieutenant governor exceeded the threshold for a primary, with Penny Bacchiochi winning the endorsement with 51 percent. The others: Heather Bond Somers, 35.6 percent; and David Walker, 17.5 percent.

McKinney seemed upbeat during the vote switches for governor. He and his close ally, Sen. Len Fasano of North Haven, embraced, with Fasano loudly clapping McKinney on the back. Fasano had delivered good news.

And he did as voting closed.

McKinney finished with 17.7 percent, according to unofficial results. The others: Foley, 57.2 percent; Boughton, 22.2 percent; Visconti, 1.8 percent; and Lauretti, 1 perecnt.

The result at the end of the first roll call was agonizing for McKinney, but not entirely welcome for Foley. 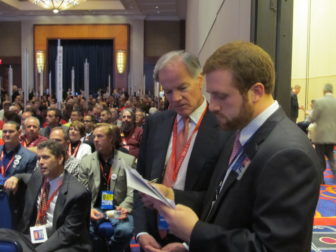 The front-runner acknowledged during the roll call that he preferred a primary with Boughton and McKinney to contest in which Boughton would be his major opponent.

After the vote was finalized, he professed to be unaware of any effort by his campaign to nudge McKinney over 15 percent. He also said he was unsure if a two-way or three-way primary offered an advantage.

Former Lt. Gov. Michael Fedele of Stamford, who narrowly lost a three-way Republican gubernatorial primary to Foley four years ago, said the Greenwich businessman benefited from facing multiple challengers in the 2010 primary – and likely would do so again if a three-way contest develops this year.

Fedele said he believes R. Nelson “Oz” Griebel, the director of the MetroHartford Alliance and the third Republican in the 2010 gubernatorial primary, siphoned off about 8,000 votes from his base. Fedele lost to Foley by 3,803 votes.

The former lieutenant governor, who is backing Boughton, said that if Foley wins this year’s convention, some Republicans who prefer other contenders will swing to the 2010 nominee.

“The endorsed candidate usually gets the people on the bubble,” Fedele said. “And then you consider that Tom brings the money, he does have a record (of running a statewide campaign) and is ahead in the (Quinnipiac) poll.

Boughton said he, too, preferred a three-way primary, especially since Foley and McKinney both are based in Fairfield County.

“I’ll let them fight in Fairfield County. I’ll spend my time trying to win the rest of the state,” Boughton said.

McKinney conceded emotions were running high as his campaign scrambled to lift the delegate count about the 15 percent-mark on the second ballot.

“You’re always getting nervous then,” he said, adding he had been resigned to entering the convention at a disadvantage, facing Foley and Boughton, who led the 2010 ticket. “In fact they’re been running for the last four to four-to-five years.”

Foley, 62, of Greenwich is a successful businessman and former U.S. ambassador to Ireland, a reward for his support of George W. Bush. He lost to Malloy by just 6,404 votes in 2010, the slimmest margin in Connecticut in 56 years. 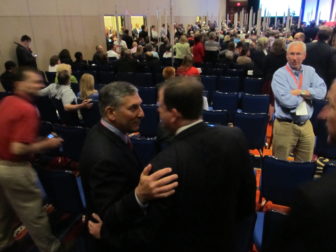 A promise to be positive

Foley was wounded in 2010 by a contentious primary in which Fedele ran ads portraying Foley as a merger-and-acquisition specialist who devastated a small town in Georgia by closing its textile mill. Foley’s lead in the primary quickly dwindled. Malloy used the same material in the general election.

“It cost me the election,” Foley said.

Jerry Labriola Jr., the state GOP chairman, said the candidates have pledged to direct their criticism at Malloy, not each other.

“It will be waged, I’m confident, in a civil manner,” Labriola said. “As long as we keep our focus on what ails Connecticut, we certainly can see some virtue in a primary.”

Foley said he would be happy to participate in a mutual pledge with Boughton and McKinney to avoid negative campaigning.

“I’ve seen that movie before,” Foley said. “I don’t like the negative ads, particularly among people who are on the same team. But whatever happens, happens.”

“I’m running against Dan Malloy,” McKinney said. “I’m going to run on a vision of turning Connecticut around. I’m not going to run against the other two Republicans.”

Boughton promised peace — to a point.

“My job is to go out and explain to the Republican voters of this state what my accomplishments are and what my vision is for this state,” Boughton said. “But if you take a shot at me, I’m going to take two back at you. I’ve got sharp elbows.”

Foley says he raised the $250,000 necessary to qualify for public financing, but he said Saturday he hadn’t decided yet whether he would use those resources, or private funding, to support his campaign. He largely self-funded his 2010 campaign.

Supporters of the GOP gubernatorial contenders opened fire on Malloy on Saturday, ignoring the intra-party competition to frame the case agains the first-term Democratic governor.

“For four long years I’ve had a ringside seat in the Senate while Dan Malloy drove the state of Connecticut into a ditch,” said Sen. Joseph Markley of Southington. A Foley supporter, Markley said Malloy saddled Connecticut with a high taxes, deep debt and an anti-business climate.

“You can’t set that man straight,” Markley added. “We have to defeat him.”

“Our budgets are so off-balance we are getting seasick,” said Francisco Borres of Bridgeport, a member of the state’s Latino and Puerto Rican Affairs Commission and a supporter of Shelton Mayor Mark Lauretti. “We need a new governor.”

Foley, who infuriated Malloy four years ago by pledging to close a historic state budget deficit with no taxes, borrowing, or cuts to education aid, was more cautious Saturday with his fiscal promises in his acceptance speech.

With nonpartisan analysts projecting a post-election deficit of 8 percent – less than half the 18 percent gap being forecast four years ago – Foley vowed only to “hold spending flat” for two years.

And while he spoke of eliminating the business entity tax – a $250 fee levied primarily on small businesses every two years – he didn’t set a timetable on when that relief might arrive.

Eick was uncertain if he would primary, but he was pleased with the result. “Twelve weeks ago, no one knew who I was,” Eick said.

“I had a strong persistent feeling that I needed to step forward,” she said, adding that the comptroller’s office needs a stronger voice for fiscal common sense. “What we have had is not working. There is a great sense of dissatisfaction.”

It was not clear immediately afterward if Cadena, who qualified for a primary, would force a contest for the nomination.

“People want to know what’s wrong with Connecticut,” Westby said. “We all know: Too much spending too much taxes, too much regulation.”

Farrell, who lost the race for secretary of the state to Denise Merrill four years ago, said afterward he hadn’t decided whether to force a primary. “I got into this quickly,” he said, “so I’m not going to make a quick decision.”