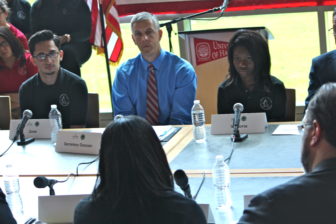 The University High School of Science and Engineering, a “middle college” in Hartford, reduces the cost of higher education by allowing its students to take college-level courses for credit. Many graduating seniors at the school enroll in college as a sophomore or junior thanks to these credits. One student will even enter the University of Hartford as a senior this fall.

Duncan sat down for a round table discussion with a group of graduating seniors, Gov. Dannel P. Malloy, U.S. Sens. Richard Blumenthal and Chris Murphy and other public officials to discuss current state and federal efforts to boost college affordability and access.

“Don’t go to go,” Duncan told the crowd of graduating University High school seniors. “The goal is to graduate.”

College affordability has become an issue nationwide as costs rise faster than the rate of inflation. In Connecticut, tuition has increased rapidly in recent years, due in part to state funding cuts. Several University High School students said Monday that tuition and fees were a significant barrier to them enrolling in college.

“A lot of us didn’t go to our top schools” because of the high cost, said Orlando Romero, who plans to attend UConn next year.

“All of the responsibility of paying for college is on me,” said Angie Reyes, who plans to attend Manchester Community College.

Tuition and fees at the University of Connecticut have increased by 22 percent — about $2,300 — over the last four years.

Duncan said to combat this rising cost, he is working to increase the low percentage of students applying for federal student loans — a learning curve many students acknowledged they struggle to overcome.

“We’re just kids, we don’t even know what loans are,” said Vinecia Thaxter,  a senior at the nearby business magnet school, High School, Inc.

The state budget approved earlier this month provides an additional $1 million to help open more of these “middle colleges” so that more students from low-income families have a shot at leaving college without a massive amount of debt.

The ultimate goal is to be “inclusive, rather than exclusive,” Duncan stated.

Malloy told reporters Monday that Norwalk will open an early college high school this fall, enrolling 105 freshmen students who will be able to earn college credit.

Connecticut Education Commissioner Stefan Pryor said two districts have already expressed interest in opening early colleges for the 2015-16 school year. The state currently allocates additional funds to the 30 lowest-performing districts each year for new education initiatives, and “middle colleges” will be eligible for these state dollars.

At the federal level, Duncan said he wants to hold colleges accountable for their increasing costs that are pricing students out of higher education. He said he would like to see federal funding be linked to college graduation rates, tuition costs and other benchmarks. But when it comes to how exactly schools will be held accountable, Duncan said the federal government is still “working through” the benchmarks.