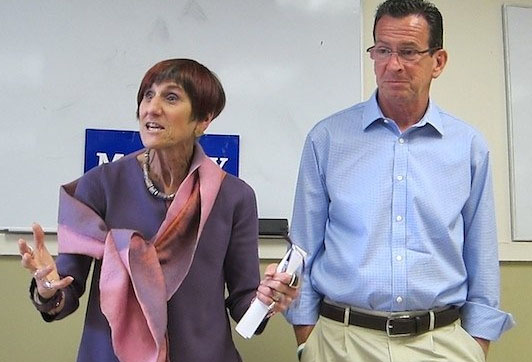 One of New Haven’s most frequent guest these days, Gov. Dannel P. Malloy, returned to town Sunday afternoon to dispatch troops like Ross Granville Harrison III and Celestino Cordova on a mission of “hand-to-hand combat:” running up his victory margin here even more than in 2010.

Harrison, a retiree and first-time volunteer, and Cordova, a Fair Haven Democratic ward co-chair and longtime party worker, were among 20 Malloy faithfuls who showed up at the Central Labor Council’s Chapel Street headquarters to start working the phones and to hear a pep talk from the governor.

Democrat Malloy has been in town so often lately—including almost every day last week—that he could qualify for residency. There’s a good reason for that: New Haven gave him a stunning victory margin in his 2010 campaign: 18,606 votes, the largest plurality statewide. He needed every last one of those to squeeze by Republican Tom Foley (Malloy won statewide by only 6,404 votes). Now Foley is running against him again, and he needs New Haven more than ever: polls show the race neck and neck, with some of Malloy’s past supporters speaking of deserting him. No New Haven landslide, no reelection.

Democratic Town Chairman Vincent Mauro Jr. set the bar high in remarks to Sunday’s gathering: “It’s going to be a hard election year. When New Haven delivered a plurality of 18,000 votes [in 2010], it was a source of pride for us. Let me tell you – I think he’s asking for 20,000 this year. We’re going to get this thing rolling and we’re going to win this thing.”

Read more of this story at the New Haven Independent.