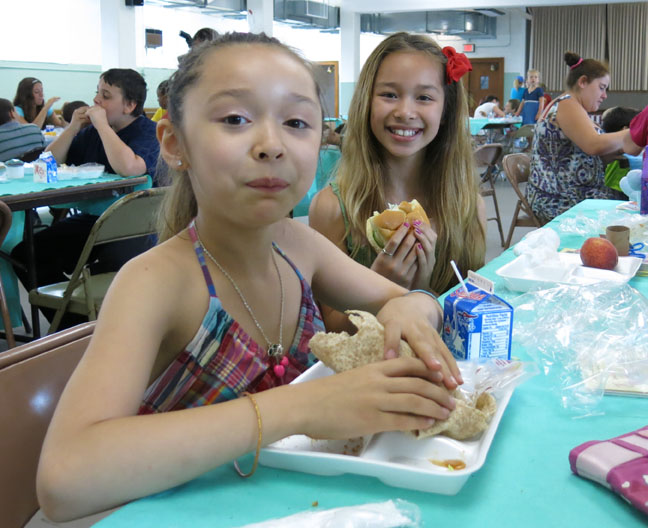 Roger LeBlanc stands near the entrance to the spacious church basement. He greets children by name as they walk in, directing them to get signed in before they go to help set up, or play games. Many children have already arrived, and are laughing as they chase around balloons, one of today’s activities.

LeBlanc is the program coordinator for the Enfield Summer Meal program at St. Patrick’s church,  sponsored by the Connecticut Community Renewal Team. He and the other volunteers work to create a safe and fun atmosphere where children can socialize and learn. Many show up well before meal time in order to participate in the program’s activities.

“The families are all telling us that this is incredibly helpful during the summer,” LeBlanc said. “Families may come every day. They may not come every day. It’s their option. We’re here.”

This program is just one of many across the country offering offer free summer breakfasts, lunches, and snacks to low-income children. While these programs have struggled over recent years to meet the needs of their communities, prospects are looking up.

In 2013, the number of low-income children eating free summer meals increased significantly nationwide for the first time in a decade, according to a report released earlier this year by the Food Research and Action Center.

The report states that the nation also saw an increase in the ratio of children eating summer meals to children eating free or reduced-price meals during the school year through the National School Lunch Program. In 2013 the summer meal program reached nearly 3 million low-income children, or 15.1 children out of every 100 receiving NSLP lunches. That’s just higher than 2012’s 14.3 out of every 100. 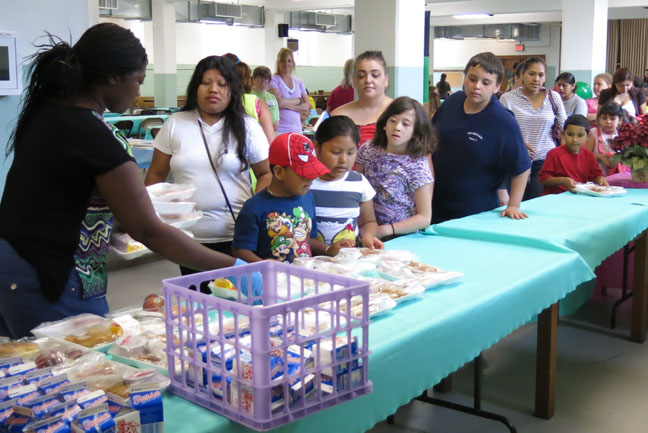 Children and their parents line up to receive meals.

Connecticut saw 2,622 more low-income children eating summer meals in 2013 than in 2012, according to the same report.  In 2013 the state served 26.4 children out of every 100 receiving NSLP meals — the fourth highest percentage in the nation, behind the District of Columbia, New Mexico and New York.

The number of sites is also increasing. According to the FRAC report, as of July 2013 Connecticut had 236 summer meal sites, compared to 217 sites the same month in 2012.

Meals must fall within nutrition guidelines meant to ensure that children get a balanced meal. If the meals meet the requirements, the Connecticut Department of Education reimburses the sponsor for the cost.

These nutritional requirements exist because summer food programs can be crucial to low-income children’s health and development, as well as to their education.

Genevieve Caron, child nutrition coordinator at End Hunger Connecticut, said “We want kids to be ready to learn in the fall, and they’ve shown that kids that don’t have nutritional intake during the summer don’t do as well in school as kids who do. We want every child to have that chance.”

This need, among others, is the reason those working in the program aren’t satisfied yet with its reach.

Dawn Crayco, deputy director at End Hunger, said that there’s a lot more to be done. “The program is definitely underutilized, the most underutilized Federal Nutrition program,” she said.

Jennifer Adach, communications manager at FRAC, said that often the children who aren’t being reached simply don’t know about the program. “Family awareness is a huge barrier,” she said.

Crayco agreed.  “I don’t think we can over-emphasize that people just don’t know this program exists,” she said.

Lucy Nolan, executive director at End Hunger, said that information about the program has to reach everyone in a family. “Kids need to know about it, parents need to know that it’s a safe place for their kids,” she said.

The programs are working on increasing publicity. Sites put information in local papers, and volunteers hit the streets with flyers. End Hunger holds a “Blitz Week,” a series of days where volunteers go through cities all across Connecticut getting the word out. Families can also use an online service to help locate summer meal sites near to where they live.

But that only addresses part of the problem. Even if families know about the Summer Food program, getting to a site can be a challenge. Not all areas are eligible for a local program.

“A site can be set up anywhere in Connecticut if at least 50 percent of the kids in the area are eligible for free or reduced-price meals,” Crayco said.

However, this can still leave some families far away from a summer meal site.

“Access in itself is still difficult,” said Jane Grant, nutrition manager for the Community Renewal Team, said. “One of the ways we’ve been trying to overcome that is by identifying where there’s the greatest need and putting a site there… We also provide bus passes for people who can’t afford transportation.”

“The benefit of coming here is that they have access to other services. Huge access. There’s a support system here.”

Take Community Renewal Team’s Enfield program, for example, in addition to providing meals and activities for children, sets out clothes and books that families can take for free. It also brings in experts on nutrition to talk to families about healthy eating, and provides assistance for families trying to complete food stamp applications. And the program is still expanding.

“We’re trying to incorporate reading days,” LeBlanc said. “We don’t put toys out at first, and volunteers read to the kids, then the toys come out. We’ve tried it a few times and it works well.”

Grant said that perhaps the most important part of the program is that it gets low-income children away from their troubles for a bit. “It broadens their horizons. It shows them that there’s more to life than this.”

Liz Newberg, Community Renewal Team communications specialist, agreed. “It shows them that there’s more to life than their situation. There’s hope at the end of the tunnel.”

Nationwide, more than 1,620 schoolchildren in 38 states have been placed in harm’s way since 2015 by bus drivers arrested or cited for allegedly driving while impaired by alcohol or drugs — a situation that despite its dangers goes largely untracked by government officials.

“We want them to be able to get out, get a job, get themselves back on their feet and really succeed in their life," an instructor said of his incarcerated students.