Gov. Dannel P. Malloy is expected to announce a plan Wednesday to expand the services available for children and teens with significant mental health needs, a response to concerns about the growing number of young people going to — and often stuck in — emergency rooms in psychiatric crisis.

Parts of the plan are also focused on children and teens with both autism spectrum disorders and psychiatric issues, for whom finding the appropriate treatment can be especially hard, according to clinicians.

The governor’s plan, much of which would be funded with existing state or federal funds, comes a week after the state Department of Children and Families released a plan for redesigning the publicly funded children’s behavioral health system. Malloy’s plan is intended to take more immediate action.

“No child in mental health crisis should have to wait days to get access to the treatment they need,” Malloy said in a statement, adding that his plan has the same goals as the larger DCF plan. “We cannot delay taking these first steps which will spur the changes we want to see with the ongoing implementation of DCF’s comprehensive plan.”

Crisis in the ER

The number of children and teens going to emergency rooms in mental health crisis has been rising for years, but it spiked this spring.

At Connecticut Children’s Medical Center in Hartford, the ER saw 367 psychiatric visits in May, up from an average of 207 visits per month last year and 54 in 2000. And many children got “stuck” there, unable to get into an inpatient bed or another facility to get treatment. Some children stayed on stretchers in the hallway, with parents sleeping overnight in Barcaloungers between stretchers. In May, one youth spent nearly 10 days in the emergency department.

Children don’t go there because it provides any mental health treatment. It doesn’t. But in some cases, families don’t have anywhere else to go. And the hospital can’t turn anyone away.

Mental health experts note that the high emergency room volume isn’t an isolated issue. Instead, it reflects inadequacies in the rest of the mental health system. Children and teens often end up in the emergency room because they weren’t able to get more suitable services before things escalated.

The review also found that the state could use more beds in psychiatric residential treatment facilities, which treat young people whose needs are not acute enough to require inpatient hospitalization. Stays there tend to be lengthy — 176 days, on average. But the limited number of existing beds has produced delays in getting children and teens discharged from inpatient beds, which can cause a back-up in the system. 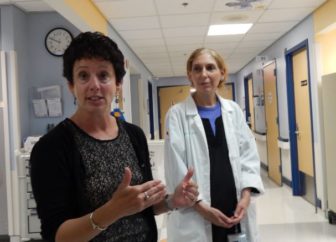 Malloy’s plan calls for encouraging psychiatric residential treatment facilities to open more beds by increasing the amount Medicaid pays for the care, from between $352 to $366 per day to $465. That change, which requires federal approval, is anticipated to cost approximately $1.6 million in increased rates for existing providers. The state could face additional costs if new beds are created.

In addition, the plan would repurpose beds that are currently vacant in “SAFE Homes” — facilities intended as short-term placements for children removed from their families — for children and teens who need crisis stabilization or respite care. Some of the beds would provide treatment for up to 15 days for children with rapidly deteriorating psychiatric conditions, while others would be available for respite care for children involved with the Department of Children and Families.

DCF currently funds 14 stabilization beds in other facilities, and the plan would make all of them available to families who are not involved with DCF. That part of the plan, which includes additional staffing for the beds, would cost about $8.5 million, $7.5 million of which would come from money being reallocated to reflect savings from having fewer children in other types of congregate care.

To provide support and care coordination for children and teens in congregate care or who frequently use emergency rooms, the plan calls for spending $2 million that’s already in the DCF budget to develop services. And $160,282 in federal funds would add emergency mobile psychiatric services staff to emergency rooms to help link children and families with long-term, appropriate treatment and respond to crises.

Two pieces of the plan include considering additional steps: One is to possibly expand emergency mobile psychiatric services, which families can call to respond to crises, by adding clinicians and extending the hours it operates. Another is to consider creating community-based behavioral health assessment centers that could serve as alternatives to emergency rooms.

Youth with autism and psychiatric needs

Psychiatrists say it’s a particular challenge to find inpatient units that will accept teens with moderate to profound autism in addition to a psychiatric illness.

Malloy’s plan has four elements aimed at addressing the needs of children with autism. One is establishing multidisciplinary transition teams for children and teens with autism receiving care in psychiatric residential treatment facilities and other settings, which would help plan for them to leave the facilities.

The plan also calls for seeking proposals for up to three specialized inpatient hospital beds for people with both autism and psychiatric disorders.

In addition, the state Department of Developmental Disabilities will develop a pilot program of in-home care for 10 youth aged 13 to 21, intended to keep them out of inpatient and residential treatment. It would be funded with $300,000 that’s currently in the budget.

The plan also calls for ensuring that Medicaid covers treatment of autism for young people, something the federal government now requires of states. For years, the state has denied Medicaid coverage for an autism treatment known as applied behavioral analysis, but advocates say new federal guidance released this summer means the state must cover it.

The emergency room is still busy at Connecticut Children’s.

“On Monday, I walked in to eight kids who had been there for the weekend, who had been determined to need inpatient level of care, for whom there were no beds anywhere,” said Dr. Lisa Namerow, a child and adolescent psychiatrist at the Institute of Living who directs the child psychiatry consultation services at Connecticut Children’s.

Namerow, who had not seen Malloy’s plan when she spoke to The Mirror Tuesday, said she welcomed immediate action. But she said any plan needs to include more treatment, not just care management.

“That has to be both at the community care end, so that kids can get into treatment more easily, into outpatient care, but we also need more services at the high end so kids who do need hospitalization can get out of our emergency room and to programs in hospitals to get treatment,” she said.