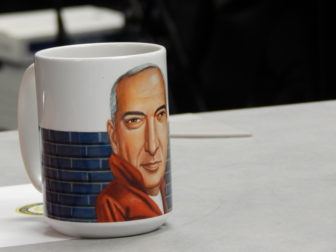 As a gift, Thomas Leonardi received a mug with the illustration of him that accompanied an article dubbing him a “rebel with a cause.” The illustration was by Charlie Powell.

Leonardi, who has led the insurance department since shortly after Malloy took office in 2011, had previously headed an investment banking, venture capital and private equity firm, Northington Partners. He will join Evercore, a New York investment banking advisory firm, as a senior advisor focusing on insurance.

Leonardi is the first agency head to announce his departure since Malloy’s re-election. In August, as Malloy campaigned, Education Commissioner Stefan Pryor announced he was looking for a new job and would not seek another term.

During his tenure as commissioner, Leonardi developed a high profile on international regulatory matters. An insurance industry publication, Leader’s Edge Magazine, dubbed him a “rebel with a cause” for what it called a “maverick streak” within the National Association of Insurance Commissioners.

He traveled extensively. The Hartford Courant reported that between June 2011 and August 2014, he reported 64 trips to the Office of State Ethics, more than any other state employee.

Malloy said in a statement that Leonardi’s work had helped the state reclaim “its reputation as the insurance capital of the world.”

“Our international influence has never been higher,” Malloy said.

Leonardi inherited an agency that had faced criticism from consumer advocates and some legislators for being too friendly to the insurance industry, particularly on health care matters. Early on, he won praise from advocates for opposing a push to change the way health-insurer spending on broker fees were counted when trying to fulfill an Obamacare rule requiring them to spend at least 80 percent of premium dollars on medical costs.

He faced criticism after his agency opposed a measure that would have allowed for more public hearings on proposals by health insurers to raise premiums. After Malloy vetoed the bill, Leonardi, legislative leaders and state Healthcare Advocate Victoria Veltri reached a compromise that created a way for the healthcare advocate to request hearings on certain rate hike proposals.

Leonardi also drew attention for recommending that the state not take up President Obama’s offer to allow insurance companies to continue health plans slated to be discontinued because they didn’t meet the federal health law’s requirements. The decision came amid a firestorm of criticism of Obamacare last year when many people learned their plans were being discontinued, despite the president’s pledge that those who liked their plans could keep them.

While considering the decision, Leonardi was one of a handful of insurance commissioners invited to discuss the matter at the White House. But he maintained that taking up the president’s offer would be problematic, since most plans being discontinued wouldn’t have been affected by the fix, and since insurance companies did not appear interested in extending the plans. Connecticut did not allow the plans to be continued.

Leonardi will step down Dec. 11. Malloy did not immediately name a successor. One potential contender is Deputy Commissioner Anne Melissa Dowling, who has led the department’s health insurance initiatives, including many related to the rollout of Obamacare.