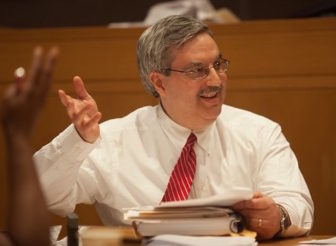 After decades as one of New Haven’s leading elected officials, Jorge Perez has been tapped to enter state government as Connecticut’s new banking commissioner.

As president of New Haven’s Board of Alders, Perez has wielded more power over major decisions affecting the city — including its budget and economic development — than any elected official other than the mayor. He has served on the board since 1988, representing the Hill neighborhood. He is a banker in his day job; he currently works as senior commercial lending officer for Liberty Bank on Church Street.

Gov. Dannel P. Malloy is to announce his nomination of Perez as the new banking commissioner at noon at the Capitol Friday. The nomination will be forwarded to the General Assembly, which must confirm him. The governor’s staff began notifying selected people at the Capitol after 5 p.m. Thursday.

If confirmed, he will become the state’s first-ever Latino banking commissioner.

Perez, who is 52, has in the past considered running for mayor, then decided against it. He moved with his family from Cuba to the Bronx when he was a child, then to New Haven, where he attended and graduated from the public schools. He started his career in the mail room of a bank, and worked his way up.

At aldermanic hearings, he is known for asking the most detailed, probing questions on finances, putting city officials on their toes.

Side note for New Haven political junkies: If confirmed, Perez will return to the role of regulating the activities of John DeStefano. When he served as mayor of New Haven, DeStefano needed the Board of Alders’ approval — which often meant Perez’s approval — for many initiatives. Now DeStefano serves as vice-president of START Community Bank — which the state Department of Banking regulates.

It was unclear Thursday night whether Perez will immediately step down as Hill alder. It is believed he will not run for reelection as alder. That will leave a power vacuum on the board, where overtly or subtly Perez exerts a dominant influence.

Bruce Adams has been serving as acting state banking commissioner since Howard Pitkin stepped down in January.

Former city Chief Administrative Officer Rob Smuts called Perez’s nomination “a huge loss for New Haven, though. I know I always had to think a little harder and triple check all my facts knowing that I had to go before Jorge [to make a presentation before the Board of Alders], and I’m sure that is as true for my successor in city government as it was for my predecessors. Such a knowledgable and tireless head of the legislative body does not make things easy for administration officials, but does result in better government.”

“Give those banks a taste of accountability!” Smuts added.