Should CT give terminally ill patients the ‘right to try’ unapproved treatments? 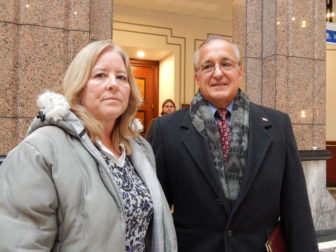 Debra Gove, who has ALS, and Richard Bunting, who has cancer.

A year ago, Debra Gove and her husband were working toward retirement, with plans to sell their Durham house and travel aboard a 43-foot boat they were fixing up. Then, last March, she was diagnosed with amyotrophic lateral sclerosis – ALS, the condition known as Lou Gehrig’s disease. It has no cure.

Now she spends a lot of time in hospitals and doctor’s offices. She’s participated in eight studies, hoping to give researchers insights that could one day lead to a cure. She’s had spinal taps and brain MRIs, given DNA, urine and saliva samples, and 57 vials of blood. She’s one of 48 patients in a clinical trial for which she had 125 million stem cells injected into her spine and arm. Gove hopes she’ll start to feel a difference if that treatment works, but she knows there’s a chance she was one of the 12 subjects who received a placebo.

And if the treatment shows promise, she figures it will be a decade before it gets through the Food and Drug Administration’s approval process and becomes available to patients outside clinical trials.

Gove came to the state Capitol complex Monday to appeal to legislators to allow terminally ill patients access to experimental treatments that haven’t yet received FDA approval. She introduced herself to lawmakers as “the lab rat.”

“It makes no sense that a terminally ill patient can’t avail themselves of any drug or treatment with even the slightest chance of helping,” she said in written testimony.

Supporters of a so-called “right to try” proposal described it as a way to give hope to patients with no other options, for whom weighing the potential dangers and benefits of trying an unapproved drug might be different than for those without a terminal diagnosis.

Still, some acknowledged potential concerns — the possibility of giving desperate patients a false sense of hope, the harms that could come from drugs that are still in an investigational stage, or the likelihood of disparities between those who can afford to pay for experimental treatments and those who can’t.

“While some may argue that access to experimental treatments poses a significant risk of harm to the patient, it would seem that this danger is actually far less than that posed by the certain death due to the underlying illness,” Senate President Pro Tem Martin M. Looney, D-New Haven, told the Public Health Committee during a hearing Monday, describing it as a measure that strikes a reasonable balance and includes reasonable safeguards.

The bill sets some standards on what treatments patients could try: Any drugs or devices would have to have completed phase one clinical trials — which evaluate safety, dosage and side effects — and would need to still be under investigation in an FDA-approved clinical trial.

Patients would only be eligible if they have considered all approved treatment options and are unable to participate in a clinical trial within 100 miles from their home. They would have to sign a document that explains, among other things, the FDA-approved treatments, the potential best and worst outcomes of the experimental treatment, and a realistic description of the most likely outcome, including the possibility that the person’s symptoms could get worse or hasten death.

Five states — Arizona, Colorado, Louisiana, Michigan and Missouri — have “right to try” laws, and 24 states have bills pending that would allow the practice, according to the National Conference of State Legislatures.

The FDA has not taken a position on any state’s “right to try” legislation. The agency already has an expanded access or “compassionate use” policy for allowing people with serious diseases or conditions to receive drugs or devices that have not yet received FDA approval, and spokeswoman Sandy Walsh said the FDA has allowed more than 99 percent of the requests it received during the 2010 to 2014 fiscal years to proceed.

But in some cases, patients have been unable to get treatments because drug companies have not made them available, she noted. And Walsh said the FDA is not a barrier to accessing experimental drugs or devices.

“The agency is an important part of the process and helps to ensure patients are adequately protected from receiving a potentially harmful or ineffective treatment,” she said.

Several state lawmakers expressed support for the concept behind the proposal, although some spoke of the importance of getting the details right.

“With proper monitoring and oversight…there is a role for these drugs to be used,” said Rep. Prasad Srinivasan, R-Glastonbury, the only physician in the General Assembly.

Rep. Vin Candelora, R-North Branford, acknowledged the FDA’s compassionate use policy, but said it would be good for the state to have its own policy. He said a family in his district has two children with the same disease and sought access to experimental drugs through the FDA, but only one received approval.

Some supporters described the bill in context of another proposal that would allow doctors to prescribe lethal doses of medication to mentally competent, terminally ill patients who request it.

“What about those who want to be treated so they can live? What are we doing to ensure, to the extent possible, that they have a genuine choice?” Nicole Stacy, public policy assistant for the Family Institute of Connecticut Action, said in written testimony.

Richard Bunting of Westport told legislators that his wife has multiple sclerosis and can’t tolerate the medications that are currently available. He has cancer that’s in remission, but it has no treatment.

When you have cancer, doctors tell you to try this or that, he said. “And then one day, they tell you, ‘We’ve tried everything.’”

“A hail Mary pass is better than laying down to get tackled,” he said.