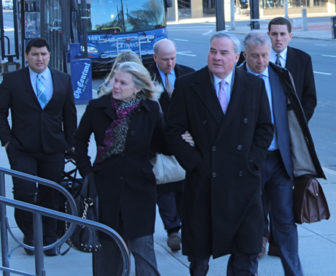 Rowland, a 57-year-old former Connecticut governor, received a 30-month sentence Wednesday in U.S. District Court in New Haven for conspiring to hide work he did for a failed 2012 Republican candidate for U.S. Congress, Lisa Wilson-Foley. He arranged to be paid through a phony contract with the candidate’s husband’s nursing-home company. He tried to strike a similar deal with another Republican candidate in 2010.

He did all that after serving 10 months in jail years earlier for collecting $107,000 in improper payments from a state contractor while governor.

Now he is to surrender to authorities by June 16 for another turn behind bars.

Wednesday’s sentencing was the latest turn in a remarkable rise-and-fall drama involving one of the most successful politicians in state history — the youngest-ever elected congressman, who went on to win three terms as governor, then ended up with jail sentences for not one, but two corruption cases.

The former governor appeared before U.S. District Court Judge Janet Bond Arterton in the Church Street courthouse Wednesday for his sentencing on seven criminal charges, five of them felonies, including racketeering, obstruction of justice and election fraud. Prosecutors had sought a sentence of 37 to 46 months in jail.

Rowland, at one time an omnipresence in Connecticut’s public dialogue, declined to address the court.

His wife Patty did speak. She pleaded with the judge for mercy.

“We were happy and content, with a quiet life” before the government indicted her husband, she told Arterton. “Over the last two years, we’ve lost our savings John has lost all he worked for and all he valued…

“This process has taken a toll. My hope is that you believe this is enough.”

Rowland’s attorney, Reid Weingarten, argued that the government went after Rowland because of who he is, not because of the severity of the crimes — noting that it didn’t charge the lawyer who drafted the contract at the heart of the case. Weingarten implored Arterton to restore a sense of balance by sentencing him to home detention rather than jail.

Federal prosecutor Liam Brennan, on the other hand, called the crimes a “full-blown conspiracy” that would have continued had the government not stepped in to stop it. He noted that, unlike Rowland, the other conspirators did not have prior criminal records; and that Rowland continues to fail to accept responsibility for his continuing misdeeds.

“In this country there are people who struggle for one real chance. But John Rowland has had a first, second, third chance. He was a wealthy man earning more than most Americans can think about. And he still did this. A prior sentence of a year and a day was not enough to get him on the straight and narrow.” 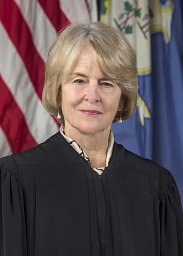 Lowering his voice, Brennan asked the judge to sentence Rowland to 30 or more months behind bars: “We hope a sentence of that range would motivate to turn away from the dark endeavors.”

“What it comes down to,” Brennan noted, “is what your honor thinks.”

Arterton said what she thought after a brief noon recess, announcing the 30-month sentence.

She said Rowland’s previous incarceration failed to produce its intended result — “that he would never be seen in federal court again.”

“It is important to remember what this sentence is not about,” Arterton remarked from the bench. “It isn’t about whether he was a good or bad governor…

“And this case is not about public corruption or bribery. It is about public conspiracy to violate the Federal Election Campaign Act, which requires public disclosures of campaign expenditures, campaign receipts and limits campaign contributions. And it’s about the falsifications that were found to have been throwing off government investigations into those potential violations.”

The crimes Rowland committed are “certainly not trivial,” Arterton said. “…And they are not careless.” The former governor’s “lust for influence…cannot be tolerated,” she concluded, especially if the law seeks to prevent people from undermining federal election laws.

At 12:32 p.m. she pronounced the effective sentence.

The judge said she will recommend that Rowland be housed at the federal minimum-security prison in Otisville, N.Y.

Former Gov. John G. Rowland inside the U.S. Courthouse in New Haven after arriving for his sentencing Wednesday.

In 2004, Rowland resigned in disgrace midway through his third term as governor and pleaded guilty to one count of public corruption, which involved his conspiring to accept illegal favors and cheat the government out of taxes during his time as governor. He served ten months in prison.

Barely ten years later, in September, playing out in the same federal courthouse in New Haven in a second case captioned U.S.A. vs. John G. Rowland, he was convicted by a federal jury on seven additional counts.

At trial, Rowland’s lawyers characterized his actions as “politics as usual.” Prosecutors contended that Rowland and his co-conspirators unlawfully deprived voters and regulators of information they were entitled to have as part of a fair election, out of concern that voters would never accept a candidate who was taking advice from a convicted felon who had abused his office. The jury returned a guilty verdict less than a day after getting the case.

According to prosecutors, the criminal activity in question began mere months after Rowland completed his period of federal probation in 2009. Rowland’s lawyers submitted 90 letters from friends and supporters attesting to their client’s “concern for society’s most vulnerable populations and his dedication to promoting diversity. (Click here to read about Rowland’s “Character Counts” campaign back when he was still governor.)

During Wednesday’s proceedings, Rowland’s attorney made a prediction: “He’s done politically.” Connecticut will have to wait a few years to see if that’s true.