Connecticut looking for new ways to fund its parks 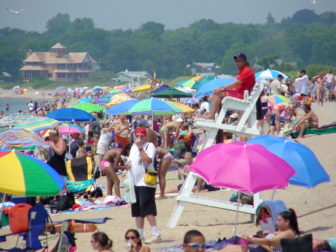 When Gov. Dannel P. Malloy’s budget arrived last month with a $2 million cut in the annual state parks budget, reactions were swift — and a bit on the melodramatic side.

“I just picked myself up off the floor,” Eric Hammerling, executive director of the Connecticut Forest and Park Association said after learning of the proposed cut.

Perhaps he shouldn’t have been so shocked.

Nationally, state park funding has been a favorite target of governors and legislatures looking to save a few bucks – a practice that became even more pronounced after the recession hit in 2008.

Connecticut, it turns out, had been one of only two states left (Rhode Island is the other) that were using the state’s general fund as the exclusive funding source for their state parks. Nine states use no general fund money.

Now Connecticut, with 140 state parks and forests covering 255,000 acres overseen by the Department of Energy and Environmental Protection, is poised to join the trend of cobbling together state park funding from an array of sources, including non-governmental ones.

The motor vehicle fee would be structured as what’s known as an “opt out” choice. In other words, the box to donate is already checked. A car owner who does not want to contribute would have to affirmatively opt out. “Opt outs” for these sorts of fees have proven to be far more successful than systems in which someone is asked to “opt in.”

With about 2.2 million passenger vehicles in the state, most on 2-year registration cycles, even a 50 percent compliance rate would generate more than $2.5 million annually.

The motor vehicle fee tactic has been used successfully by a number of other states. “I spent some time studying what are some of the things we should at least be considering,” Kennedy said.

He looked at other widely used park funding mechanisms – a tiny percentage added to the sales tax, a portion of real estate transfer taxes, and lottery revenues. “I’m pretty new here,” he said. “But I know enough to know they’re not going to fly.”

The registration charge is structured as a donation to avoid the kinds of raids other presumably dedicated funds have suffered when a need arose to plug budget holes elsewhere.

The bill also contains language at the insistence of Rep. Melissa Ziobron, R-East Haddam, that would further restrict raids, though it doesn’t go as far as a constitutional amendment, which has been proposed to protect transportation funding.

“The state has a problem keeping its hands to itself,” she said, noting raids on tobacco and clean energy funds as well as the current effort to divert the Community Investment Act fund, which supports open space and farmland preservation, into the general fund.

State parks funding suffered a similar fate beginning with the 2010 fiscal year. Until then there was a dedicated funding source for parks called the Environmental Conservation Fund. It came from various park and environmental fees and revenues that went directly back to the parks. It accounted for as much as a quarter of the budget, with the rest coming mostly from general funds.

Now that revenue – which is about $6 million annually – goes to the general fund. The state park operating budget, which is about $18 million for the current fiscal year — $11.6 million of which is within DEEP — has to compete like everything else for a portion of that fund. 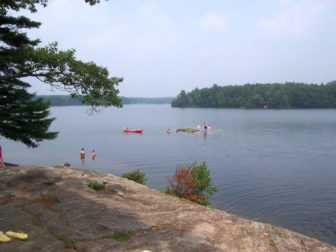 Exploring ways to enhance park funds outside the state budget was recommended a year ago in a report by the Legislative Program Review and Investigations Committee. The legislation also begins the process of looking.

Ideas include better ways of enticing philanthropic donations and restructuring the concession system, which now requires giving first dibs on running them to the Bureau of Education and Services for the Blind. Initial language in the legislation that tried to change that exclusivity was met with an outcry from advocates for the disabled and has been modified. An idea to use unclaimed bottle deposits was voted down by the committee.

But Kennedy and others believe there are many ways of supplementing park funding, from expanded concessions, sponsorships, small business operations such as boat rentals as well as increasing parking rates and extending the seasons at some of the largest and most popular parks, such as Hammonasset Beach in Madison.

“The time has come to explore these various funding options,” Kennedy said. “We need fresh ideas, and to figure out: Are we leaving money on the table?”

Given the trends seen nationally, those ideas and that money will be needed.

Resources for the Future, a non-partisan economic research organization that studies issues related to environment, energy and natural resources, has looked extensively at state park funding.

“All state parks with the recession just got hit so hard,” said Margaret Walls, a senior fellow who has produced two reports on the issue in the last few years. “What are you going to cut? State parks.”

But she said, there already was a shift underway toward greater use of dedicated funds and increased fees. Walls’ report provides a long list of funding permutations. There are all manner of user fees within the parks. Michigan and Pennsylvania set up endowment funds derived from mineral, oil and gas lease fees. There are philanthropic endeavors, something Connecticut is just beginning to try. There are special park districts for raising money. There are revenues derived from fees on everything from plastic bags — used in Hawaii and New York — to real estate taxes.

She offers several pieces of advice and some cautions as well.

On the advice side, she suggests fees that are broad-based, such as a portion of the sales tax. “That way, everybody’s paying it,” she said. “Everybody feels ownership of the parks.”

License fees from fishing, hunting and other specialty activities, she said, are too narrow. She dealt with philanthropy in a separate report, saying it can be expensive to manage and it’s not generally a reliable funding stream.

Motor vehicle fees like the one Connecticut is proposing can work, she said, even though they’re not quite as broad as a sales tax.

“It does seem like a Band-Aid a bit, to have only $5 every two years, voluntary,” she said. “There will be free riders – people will not pay it. This could be a slippery slope.” 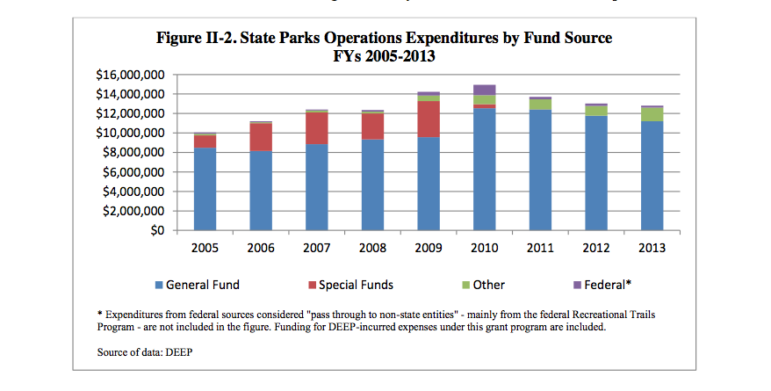 Which is why Pam Adams calls the motor vehicle fee a good start.

Adams is the president of Friends of Connecticut State Parks, but from 1997 to 2009, she was the director of the state park system. Priority one for her is reinstituting a dedicated fund that can’t be raided.

“With the right business models, I think you could get the better part of the parks off the general fund,” she said.

She would like to see state park license plates that would also help streamline park entry, especially at crowded beaches. She’d like to see honor system kiosks, known as iron rangers, used at smaller parks for fee collections, and she’d like to see more robust opportunities for businesses and concessions to operate within parks.

But part of the problem has been the perception of the role that parks play here. “It never was really a state that viewed its parks as an asset,” she said. “We’re starting to recognize that.” 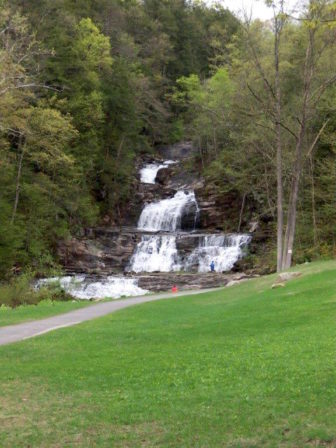 Even if the current legislation succeeds in creating a new partial funding paradigm, a question remains – what about this summer?

To that end, there’s been a full-court press by park advocates to get parks funding restored for at least this year.

DEEP Commissioner Rob Klee has warned that the cuts will have an impact on park operations. “We are looking at everything,” he said in his testimony to the Appropriations Committee.

Connecticut Forest and Park’s Hammerling said as many as two-thirds of the nearly 600 seasonal park workers could be eliminated. Park hours could be cut. Some parks could be left unstaffed and some could even be closed.

“This summer could be a disaster,” he said.

For the long run though, he said: “I do agree it’s time to be thinking about a new model for funding our state parks.

“I think the less reliance on the general fund, the better for the state parks.”

CT keeps losing power when storms strike. But that doesn’t have to happen.