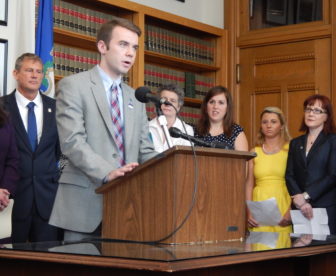 Adam Kuegler, external affairs chairman for the Undergraduate Student Government at the University of Connecticut in Storrs, at a press conference Tuesday.

The state Senate Tuesday unanimously passed a bill making the services of special sexual assault nurses available at the University of Connecticut infirmary in Storrs.

The bill specifically targets UConn’s Storrs campus because of its distance from Windham Hospital, currently the closest center that can administer the SAF exams.

Currently, SAF nurses can be paged to six hospitals in Connecticut that offer SAF examinations, and the legislation would designate the UConn infirmary as an additional site.

This way, UConn’s sexual assault victims will be able to have their SAF exam administered in a familiar location, and will not have to provide information about their assault at two health centers.

SAF nurses receive 40 hours of special classroom education, during which they are trained in both administering SAF exams and specialized knowledge of legal issues, such as courtroom testimony and the chain of custody for physical evidence.

“Imagine that your daughter, son, brother, sister, or friend has been sexually assaulted. Instead of receiving care at the place they go where they are sick, injured, or need other medical help, they are ushered into an ambulance,” Kuegler said. “Then, they must take a ride to a hospital… and wait for someone who could be on the other side of the state to arrive and apply a kit to collect evidence from the assault that took place.”

Legislators and UConn officials hope to ease the process by which sexual assault victims can report assault, reduce wait time for services and prevent victims from having to repeat their statements.

Victims will still have to wait for nurses to arrive before they can receive care.

Last year, UConn was the subject of a highly publicized Title IX lawsuit in which five women sued the university, saying it had responded inadequately to their sexual assault claims. A settlement resulted in a $1.3 million award to the victims and expansion of sexual assault services on campus.

The office of the dean of students was reinstituted in 2014 in response to the lawsuit as well. The dean, Eleanor Daugherty, said the university has created an assistant dean of victim support services, “which allows us to centralize the moving parts that I think can be overwhelming to a victim.

“We needed to do more and make access to the SAF nurses easier and more comfortable for the students,” said Daugherty.

During the Senate debate, legislators said they felt the present system caused unnecessary stress for the victim and that SAF exams, which can take hours, should be done in a local, familiar environment.

“You can only imagine the trauma a rape victim feels retelling their story,” said Sen. Steve Witkos, a former police officer who dealt with recording sexual assault victim’s statements.

The bill will now move to the House of Representatives.

The public health bill no one is talking about, but should be