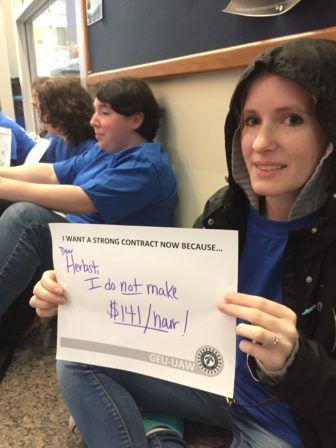 The University of Connecticut and its graduate assistants’ union have reached a tentative agreement on a three-year contract that grants the assistants nine percent pay raises over the next three years.

The first-ever agreement with the UConn Graduate Employee Union  was reported to the college faculty in a letter from university President Susan Herbst on Tuesday afternoon. It came after months of negotiations with the GEU-UAW Local 6950 and about four hours after the organization staged a sit-in at the Storrs campus Student Union.

“After a year of bargaining and much work by hundreds of GAs across campus, we are excited about this agreement and look forward to focusing on providing quality teaching and research here at UConn. This agreement respects the contribution we make to the University, and we strongly recommend that GAs vote to ratify it as our first contract,” said Ameya Akkalkotkar from the GEU-UAW bargaining committee.

The graduate assistants have been demanding higher wages, improved health care benefits, a waiver of university fees and other workplace benefits for many months.

Both the university and the union made compromises to reach the accord. The university agreed to raise graduate assistant stipends by 9.3 percent over the next three years, down from the 20 percent originally demanded by the union. And while the union had originally sought a waiver from university fees, it has tentatively accepted exempting students from one fee, a $100 credit against certain fees in the second year of the contract, and $200 in the third year. The package will save assistants between $500 and $900 per year.

The contract also includes previous agreements made on issues such as paid maternity leave, and expansion of workplace security.

The union, which represents about 2,300 graduate students, won a significant concession on the issue of health benefits. The university agreed to provide subsidized health care benefits similar to those state employees receive.

The assistants, who receive free tuition valued ranging in value from $12,000 to about $31,000 per year , withdrew all demands regarding extra time off, such as a proposal for three weeks of vacation time, or two and a half weeks of additional leave time each semester. A retirement plan was also taken off the table.

“My expectations before I entered the [Tuesday negotiation] meeting were that we were still not going to get anywhere, and I was a little bit worried that the sit-in was going to make the administration lock down…,” student negotiator Cara Fisher said. “I think the impending sit-in very much moved them. When they saw hundreds of people in blue shirts at the Student Union and heard them chanting, that was the thing that made them say, ‘We have to do this.’”

Looming over the talks was Gov. Dannel Malloy’s proposed $40 million in cuts to state support for the university.

The contract will be sent to the Board of Trustees for approval, Herbst said, and the union will distribute it to its members for ratification. If approved, it will then be submitted to the state legislature for review.

The big issues: fees and insurance

The main issues targeted in the agreement stemmed from complaints that began when the university began increasing university fees and changed the format of graduate student insurance more than a year ago.

According to Fisher, UConn changed the insurance from one that provided coverage similar to state employees’ to a more restrictive plan that was costly for students with families.

“The straw that broke the camel’s back was the summer of 2013 when we were told our health insurance was changing, from the almost state-employee benefits to a student plan. At that point, people starting talking about unionization,” Fisher said.

As she entered Tuesday’s negotiations, the only concession she was confident the university would make, she said, would be over healthcare. She said she was surprised to find that wages and fees, the union’s other top-priority items, were successfully addressed.

Graduate students who work 20 hours a week, the maximum for part-time workers, can earn between $21,000 and $24,000 a year depending on their degree. However, the union calculates that after fees and taxes, the average income of an assistant is roughly $18,000, and less for those assistants that work 10 or 15 hours per week.

And many graduate assistants insist that while they are only paid for 10 to 20 hours of work, the job demands many more hours than that.

“This week, we’ve had to grade 225 papers. Officially we work 15 hours, but in reality we’re working much, much more than that,” said Jessica Strom, a graduate assistant studying Italian-History.

Negotiations started off slowly, with the first round occurring early July, and the second meeting in August. The lack of apparent progress drove the union to threaten to move the bargaining into arbitration, and eventually the university hired Litller-Mendelson, a law firm that specializes in employment and labor law, to manage negotiations.

Fisher said the move was smart for the university, and she was happy there was more time at the negotiating table. But “it really galls to know that they’re spending thousands of dollars a day on this law firm to not give me a raise,” she said.

For her first three years, Armstrong said, she was proud to work at the university because of its competitive wages and great health insurance plan. When the plan changed, and the fees increased, she became increasingly unhappy with the administration, which she said was apathetic, and out of touch with her needs.

Armstrong has a 10-month-old son, a husband who is also a low-wage graduate assistant in Ohio, and she must go through expensive treatment for Crohn’s disease. When her insurance plan changed, she was expected to pay $3,000 of her $21,000 yearly salary to cover her family, plus additional costs for treating her chronic illness.

“The first year dealing with that health insurance I cried a lot; I cried when I got off the phone with them; I cried talking about it; I cried doing the research of what the plan would look like; and I cried when I found out all the information I learned was wrong.”

She said the stress negatively affected her performance in the classroom, and forced her to spend most of her vacations writing and doing research for her dissertation, rather than spending time with her family.

‘Three years ago I really felt happy here and felt really valued, and ever since then, every few weeks another decision, another thing happens that just makes me feel more and more like UConn doesn’t value me, and doesn’t see my contribution,” said Armstrong. “I thought about quitting a lot that year (Fall 2013).”

If the contract is approved, the union has to make a number of important decisions moving forward, including electing an executive board, hiring 10 to 15 stewards and writing a constitution and bylaws.

“We’re thrilled with the gains made by our UConn members in this agreement. It has been inspiring working with such an engaged membership and dedicated committee leadership. UConn is a great university, exceptional in many ways. GEU-UAW Local 6950 will be a great addition to UConn and to the UAW,” said Julie Kushner, Region 9a director of the UAW.

According to Herbst’s letter to the faculty, the university had three major objectives during the  negotiations: