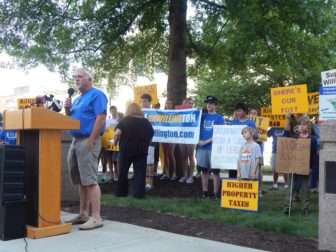 Resident Ray Crossen speaks Tuesday at a rally protesting a proposal for a state police gun range in Willington.

Residents of Willington in Connecticut’s “Quiet Corner” are campaigning against a proposal to build a state police firearms training facility in their town, and Tuesday about 50 of them brought their protest to the state Capitol complex.

Some Willington residents fear that a gun range in their town would bring noise and environmental problems and lower property values. They have banded together in a group called Unwillington to build opposition and raise funding for a possible legal battle with the state.

At Tuesday’s rally, member Mitzi Horowitz warned state officials not to underestimate the level of local opposition to the project.

“This is a life-and-death issue for our town,” she said. “We are here for the long haul.”

Stephanie Summers, president of the Unwillington campaign, said the group is not opposed to giving state police a state-of-the-art shooting range, but there are concerns over how the facility might affect the town.

“It’s not just a firing range. This is not a relocation. This is a huge paramilitary complex,” Summers said.

According to a slide presentation by state police, the Department of Emergency Services and Public Protection set out to build a new shooting range after its training facility along the Farmington River in Simsbury was severely damaged  by years of flooding. In 2013, the legislature approved $8.3 million in preliminary funding for a shooting range and vehicle operations facility. So far the State Bond Commission has approved $325,000 for planning and design.

The state says it has not decided where to build the new facility.

“There is absolutely no decision as to where this facility will go — nowhere near a decision quite frankly,” Gov. Dannel P. Malloy said at a press conference Tuesday after the residents’ protest. “Lots of properties have been looked at and examined.”

After a screening process, state police say they are evaluating two sites, one on Windsorville Road in East Windsor and the hotly contested, 325-acre Willington site on Ruby Road.

In May, at two town hall-style meetings, state police described a facility that would include 55,000 square feet of buildings, four firing ranges, an indoor active-shooter training range, two control towers, a kitchen, and classrooms for up to 100 troopers.

The next step for DAS is to evaluate the environmental impact of the project, which involves inspecting factors like noise pollution. The department says it will report on its research, community input and possible solution to residents concerns in documents it will publish when its studies are complete.

Sen. Tony Guglielmo, R-Stafford, whose district includes Willington, said the opposition is not a simple case of “not-in-my-backyard” mentality.

“This is a very poor idea from both a fiscal standpoint and a public safety standpoint,” said Guglielmo, who is the ranking Republican senator on the legislature’s Public Safety Committee.

Opponents say the Department of Administrative Services is not being transparent with their research and plans.

Summers’ group, and  Sen. Gugliemo say they have filed numerous Freedom of Information requests with DAS. Summers said her group was told it would cost DAS $100,000 to evaluate each site, but the DAS requested $700,000 from the bond commission last year.

“They think they can come into this small, podunk town and not have their facts together,” Summers said.

If their preliminary protests are not enough to keep the facility out of the town, the Board of Finance and Board of Selectman in Willington have approved allotting $100,000 to investigate the state’s site selection process, and to hire legal help and environmental experts.