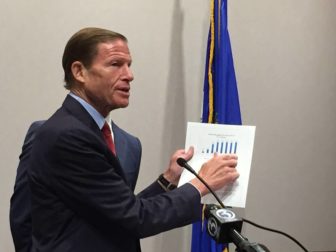 Sen. Richard Blumenthal criticized the airline industry Tuesday for a lack of transparency and what he called the abuse of hidden fees for ancillary services.

“There’s a new reason for fear of flying: the shock of flying encountered at the ticket counter is worse than the fear of leaving the ground,” Blumenthal said at a press conference at the Legislative Office Building in Hartford.

A new report released by the Senate Commerce Committee, on which Blumenthal serves, details the airline industry’s use of extra service fees, and recommended several changes to protect consumers.

A press release from Blumenthal’s office said that, since 2007, the airline industry has seen ballooning profits from these extra fees — $38.1 billion just last year.

Blumenthal also proposed subjecting airlines to excise taxes that they currently avoid for some fare services, such as when a traveler pays to upgrades within a ticket class, in order to discourage those practices.

“Airlines are reaping revenues without increasing fares, they’re avoiding that 7.5% excise tax. If you’re charged for upgrading within the economy class to economy-plus, there’s no excise tax.”

“It would be difficult to find an industry that is more transparent than airlines in their pricing,” Jennings said. “The fact that a record number of people are traveling this summer further demonstrates that customers always know what they are buying before they purchase. Airfare remains a bargain, and costs considerably less and air service is far more plentiful than it was when the government last dictated pricing.”

“Consumers ought to face transparent prices that reflect the cost of the services they’re buying. The airline industry is one of the worst abusers of this basic principle of the market,” Preston said.