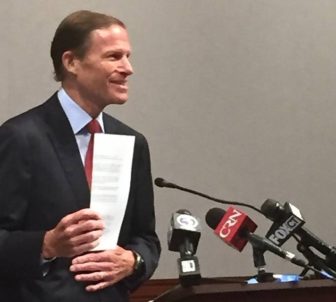 Sen. Blumenthal holds a letter he sent Tuesday to the president of West Virginia University.

U.S. Sen. Richard Blumenthal, D-Conn., wrote Tuesday to three university presidents, urging them to make public any grant arrangements between their schools and the The Coca-Cola Company.

The move comes after multiple health officials wrote letters published in The New York Times condemning what they described as misleading research performed by professors at those schools for the Global Energy Balance Network (GEBN), a health research group funded by Coca-Cola.

“I am asking them to assure that the research done on their campuses will be unbiased and un-bought, impartial and objective,” Blumenthal said. He sent letter to the presidents of West Virginia University, the University of South Carolina and the University of Colorado.

The Times published an article Aug. 9 saying that Coca-Cola provided $1.5 million to the GEBN, its website is registered in Coca-Cola’s name, and since 2008 Coca-Cola funded $4 million in research by two professors who founded GEBN in 2014. GEBN’s research stressed the importance of exercise over reduced sugar and calorie consumption in combatting obesity. GEBN has ties to professors at each of the three universities Blumenthal wrote to.

“Energy balance is not yet fully understood,” the GEBN website says, “but there is strong evidence that it is easier to sustain at a moderate to high level of physical activity (maintaining an active lifestyle and eating more calories). Not many people can sustain energy balance at a low level of physical activity (maintaining a sedentary lifestyle and eating fewer calories), as attempts to restrict calorie intake over the long term are likely to be ineffective.”

In a statement Friday night, Coca-Cola said, “We believe moderation and calorie reduction are tools for a healthier life. Coca-Cola is supporting solutions to obesity, including funding scientific research. We recognize diet, including what you drink, and exercise play pivotal roles in managing health and weight.”

The company said it had committed to a beverage industry initiative to reduce beverage calories consumed per person by 20 percent by 2025.