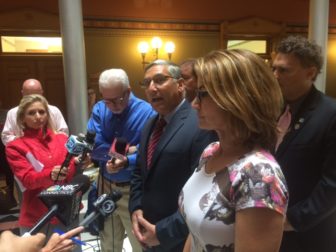 House Minority Leader Themis Klarides, R-Derby, called Tuesday on the General Assembly’s Democratic majority to reduce their new initiatives on transportation and municipal aid in order to restore cuts recently imposed on hospitals and services to persons with disabilities.

Klarides’ made her willingness to cut the programs known during a press conference with Senate Minority Leader Len Fasano, R-North Haven, to once again call for a special session to revise $103 million in budget cuts ordered last month by Gov. Dannel P. Malloy.

With the GOP otherwise refusing to offer a list of alternative cuts, Klarides’ stand on the municipal and transportation spending was off script. Fasano was noncommittal, calling her idea premature — something possibly to be taken up in negotiations with Democrats.

The news conference followed a piece of political theater: The delivery of petitions calling for a special session.

The leaders delivered to the secretary of the state’s office the signatures of every Republican legislator. For the petitions to trigger a special session, the GOP would need a majority of the General Assembly — meaning signatures from at least 12 Democrats in the House and four in the Senate.

Fasano said a demand from Democrats for specifics from the GOP was part of a “foolish, childish game.”

“We’ve been through that so many times with this governor. Even the people in their own party have put suggestions out there that the governor slapped away without conversation,” Fasano said. “I think we ignore the governor. I think we sit with the Democratic legislators and say, ‘Let’s get in a room and do this.’ If you are serious, call a special session and let’s do it.”

The GOP is trying to keep public attention focused on the Democrats’ management of the state’s fiscal difficulties. Next year, they hope to pick up legislative seats in a presidential election year for the first time since in decades.

“God knows what kind of a situation we will be in” months from now, Klarides said. “The problem is compounding every single day.”

The problem Klarides cited is two-fold:

On paper, the new budget also dedicates a portion of state sales tax receipts for transportation and municipal aid – but there is no immediate payoff.

The transportation program actually receives about $30 million less from the general fund than it was supposed to this fiscal year. Transportation comes out ahead by $96 million next fiscal year and by $195 million in 2017-18.

Similarly, the state starts saving sales tax receipts for municipal aid now, but doesn’t deliver significant funding to cities and towns until next fiscal year. Communities are supposed get $229 million in 2016-17, and $288 million in 2017-18.

Both Klarides and Fasano said they fear the revenue problems and other issues will open further deficits this year and next. The projected $1 billion shortfall awaiting in 2017-18 is more than double the extra money that same year for transportation and municipal aid combined.

The executive director for the Connecticut Conference of Municipalities, Joe DeLong, said Tuesday that local leaders are well aware of the looming deficit and its ability to affect the municipal aid initiative.

“I won’t go so far as to say they are skeptical they will see that money, but they are very concerned,” DeLong said.

“All of that money is not going to end up getting there,” Klarides said, calling it “hypocrisy” for Democratic legislators to campaign on these budget initiatives.

Malloy and his fellow Democrats also reneged on a wide array of tax breaks approved in the last term and scheduled to start after the state elections in November 2014. But Democrats canceled or postponed tax breaks — worth almost $500 million in total over two years — aimed at consumers, corporations, insurance companies, single income tax filers and the working poor.

Rather than renege on these latest budget promises after the 2016 state elections, leaders should use what resources are available to protect the poor and disabled, Klarides said. Democratic leaders “need to grow a backbone.”

Klarides specifically pointed at $105 million in sales tax receipts that is supposed to be reserved for cities and towns this fiscal year – but not delivered until 2016-17.

Fasano was more circumspect, saying afterward it would be premature to endorse Klarides’ call to reduce the municipal aid initiative, adding that all ideas should be reserved for legislative negotiations.

“As legislative Democrats prepare to announce our alternatives to the governor’s cuts, Republicans once again have nothing substantive to offer,” said House Speaker J. Brendan Sharkey, D-Hamden. “Today’s political stunt is merely a continuation of Republicans putting political grandstanding ahead of serious policy.”

“I wish it were shocking that Republicans want to have a special session without actually proposing a balanced budget,” Looney said. “Their failure to produce a comprehensive, balanced alternative budget demonstrates their total lack of commitment to actively participate in the budget process all the way to a responsible conclusion.”

Rosenberg added that “the Democratic leadership of the House has made it very clear that they’re committed to relieving the property tax burden on Connecticut’s families.”

“If the threshold for action is perfect economic conditions, then we will never be able to provide Connecticut residents with meaningful property tax savings or provide businesses and commuters with safe and reliable transportation system,” added Senate Democratic Caucus spokesman Adam Joseph. “The Republicans are essentially asking people to pay higher property and car taxes and sit in traffic.”