Study: Black women twice as likely to be re-hospitalized after childbirth 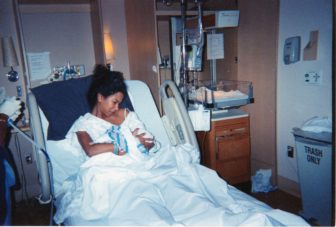 Photo by Eden, Janine and Jim via Flickr Creative Commons

Black women in Connecticut were twice as likely as white women to be readmitted to the hospital within 30 days of childbirth, and Hispanic women were nearly 50 percent more likely than whites to be readmitted, according to a study published this month in the journal Obstetrics and Gynecology.

The disparities were not substantially reduced when researchers controlled for factors including the women’s socioeconomic status, other medical conditions and whether they were covered by Medicaid or private insurance.

Overall, the rate of readmissions was low among the cases studied, which were limited to deliveries without complications. But Dr. Steve Fleischman, an obstetrician-gynecologist who co-authored the study, said the presence of disparities suggest an opportunity to improve postpartum care, which could influence outcomes beyond readmission rates.

“We view this study as opening a discussion that hopefully will stimulate people to start looking at what are potential reasons for these disparities to exist, and how can we start to peel back and look at ways of addressing it?” said Fleischman, who has offices in New Haven, Shelton, Guilford and Essex.

Hospital readmissions – when a patient returns within 30 days of leaving the hospital – have been an area of significant focus in health care in recent years. While some readmissions are unavoidable, in other cases, they can indicate complications from the initial care or problems in the patient’s transition out of the hospital. In the case of childbirth, the most common reasons for readmission were hypertension, infection and postpartum hemorrhage, and, for women who had cesarean deliveries, surgical wound complications.

The study authors examined hospital discharge data from 2005 through 2012 maintained by the Connecticut Department of Public Health. The sample included 167,857 vaginal deliveries and 75,596 cesarean deliveries, and a total of 2,658 readmissions. The authors’ work was part of a multiyear study of disparities in readmissions by the Connecticut State Medical Society.

Overall, the rate of readmission within 30 days for every 1,000 women following cesarean delivery was 12.9 among white women, 21.4 among Hispanic women and 28.9 among black women. The rates of readmission were lower across the board for women who had vaginal deliveries, but the gaps remained: 7.5 per 1,000 deliveries among white women, compared to 14.6 among black women and 10.7 among Hispanics.

The authors noted that there were other differences among the women. Black and Hispanic patients were younger, had lower socioeconomic status and higher levels of other medical conditions than white patients. They also were more likely to have been hospitalized for pregnancy-related conditions before delivery. (The authors used each woman’s ZIP code as a proxy for socioeconomic status.)

The authors wrote that the findings are consistent with other studies that have identified racial and ethnic disparities in readmission rates for conditions including diabetes, heart attacks and heart failure. But they also noted that most research on disparities in readmissions has focused on conditions more common among older, sicker patients, rather than younger, healthier patients in this sample.

Fleischman said it wasn’t clear what accounted for the disparities, and said he hoped the study would lead to more research into potential explanations.

The study authors wrote that readmissions are often influenced by factors outside the hospital, such as a lack of community resources.

They also pointed to potential genetic and biological factors, noting that certain genetic factors can leave black mothers at greater risk for developing postpartum endometritis, a top cause of readmissions.

One question the data raised, Fleischman said, is whether the differences in readmission rates reflected different levels of complications or differences in where women got care for similar issues. Fleischman noted that if a postpartum patient who lives far from the hospital calls his practice with a low-grade fever, he might see her in the office and manage her treatment on an outpatient basis. By contrast, he said, it might be more common for someone being treated in a hospital clinic to be admitted if she comes in with the same problem.

What should happen next? Fleischman suggested that each hospital look into its own data. He said it would also make sense to examine the educational materials about when to call their health care provider that patients receive when they’re discharged.

It’s standard for women who have uncomplicated vaginal deliveries to not be seen by their obstetrician until six weeks after giving birth. Fleischman noted that research on another condition with a high rate of readmission – congestive heart failure – has found that earlier follow-up care can reduce rehospitalization rates, and said one area for future research could be to look at whether it would make sense to follow up with postpartum women sooner than six weeks. In his practice, for example, a medical assistant calls patients to check in a week after delivery.

“Should we be doing those follow up phone calls regularly, across the board?” he said. “Are there screening questions we can do proactively a week, 10 days out…that we could get people into care sooner rather than into a hospital?”

Those include working to reduce risk factors women have before pregnancy, like diabetes, that put them at risk for consequences after giving birth; making efforts to reduce infections in hospitals, and trying to ensure patients can get care in the community.

“If a patient is discharged from the hospital and isn’t able to access the system subsequently, their risk of coming back in with readmission is so much higher, and that’s across the board,” not just after childbirth, Cooper said.