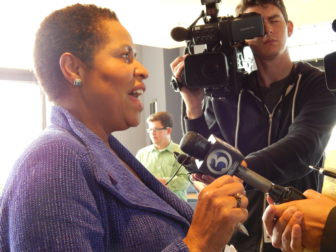 Public Health Commissioner Dr. Jewel Mullen is leaving to take a senior post with the U.S. Department of Health and Human Services.

Mullen, a primary care physician, has led the state Department of Public Health since 2011. She previously worked as a state public health official in Massachusetts and served as medical director for a community health center in Springfield.

Her new job, which she will begin next year, is in the office of the assistant secretary for health at HHS.

“Serving Connecticut residents for nearly the past five years as the state’s public health commissioner has been a tremendous privilege, as has working with the many dedicated professionals at DPH,” Mullen said in a statement. “Together, we tackled many public health challenges, and made changes to the department which will help further its vision for healthy communities across the state.”

DPH spokesman William Gerrish said Mullen is working on the details of the transition with the governor’s office.

As public health commissioner, Mullen led efforts aimed at population health improvement, reducing racial disparities in low birth weight and infant mortality, addressing end-of-life care and improving emergency preparedness. Under her leadership, the department created an Office of Health Equity and made equity a key principle of the agency’s work.

She often noted that while Connecticut tends to score well on health measures, the overall picture masks many significant disparities within the population.

During Mullen’s tenure, the state legislature expanded the ability of nurse practitioners to practice independently – a long-controversial concept that Mullen backed. The department also played a key role in passage of a law that would allow terminally ill patients to document their end-of-life care choices in a medical order after discussing them with their doctor. The concept drew significant concern from advocates for people with disabilities, but many ultimately endorsed the measure after a lengthy process the department led to work out the details.

Mullen played a key role in the state’s preparedness and response efforts during the Ebola outbreak, when the state required some who had recently traveled to West Africa to be quarantined or actively monitored.

As commissioner, Mullen also oversees the state Office of Health Care Access, a key state regulator at a time of significant consolidation in health care. The office drew significant attention and controversy last year for its handling of the proposal by for-profit Tenet Healthcare to purchase Waterbury Hospital. Tenet withdrew its bid for Waterbury and four other Connecticut hospitals after the office indicated it would impose conditions on the sale that the company deemed overly burdensome.

In addition to her Connecticut work, Mullen has played a national role, serving as president of the Association of State and Territorial Health Officials.