Spending and enrollment up, but Medicaid per-person cost is down 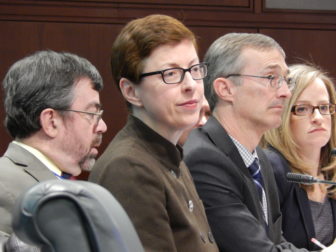 Connecticut’s Medicaid program is projected to cost the state and federal governments more than $6 billion this year, and it covers close to one in five state residents, a dramatic growth from a decade ago. But underneath the rising cost and enrollment trends, something else has been happening:

The average per-person costs have been falling – particularly among those newly eligible for coverage under the federal health law.

State Department of Social Services officials who oversee the Medicaid program said in recent interviews that it’s too early to tell exactly what’s causing the decline in per-person costs among those who became eligible under Obamacare – a group that, like its counterparts in other states, has drawn particular attention as people try to determine the financial consequences of expanding coverage.

But they suggested that the overall cost trend – per-person spending dropped 5.9 percent during the past fiscal year – reflects a variety of factors.

Those include measures the state has undertaken:

But DSS Finance Director Mike Gilbert also acknowledged other potential contributing factors, including budget cuts to the program and an influx of lower-cost clients.

“Our conjecture is that doing these right things, enabling primary care, putting applied care coordination techniques in place, really taking a goal-directed approach, that that saves money,” Medicaid director Kate McEvoy said, “as opposed to cutting the services and relying on managed care entities, which most states are doing, and they’re not seeing our experience.”

“We’re achieving better performance at a lower cost,” Gilbert said during a recent meeting of the council that oversees the Medicaid program.

Several Medicaid council members expressed frustration at budget cuts to the program in recent years, and said the cost trends combined with data showing improved health outcomes should counter any pushes toward further cutbacks in the program as state leaders deal with future budget deficits.

“Medicaid keeps getting hit in the budget, and it can’t absorb it anymore,” said Rep. Catherine Abercrombie, D-Meriden, one of the legislature’s most vocal advocates for social services.

While rising costs are the norm in health care, Medicaid has an advantage in controlling costs that private insurers don’t: While insurance companies must negotiate payment rates with health care providers, Medicaid programs generally set their own prices. And for the most part, Connecticut’s Medicaid rates for providers haven’t increased in recent years, with the exception of a bump for primary care providers as part of the federal health law. Many other providers, including ob-gyns, laboratories and radiologists, have faced rate cuts.

Annual Medicaid costs have grown in recent years, from $4.08 billion during the 2010 fiscal year to an estimated $6.13 billion this year. A big chunk of that money is reimbursed by the federal government, including about 60 percent of the costs this fiscal year.

In June 2010, when the state began expanding the program under the federal health law, it covered just over 505,000 people. In December, 732,619 people were covered by Connecticut’s Medicaid program, known as HUSKY.

According to DSS figures, spending rose 5.7 percent during the 2015 fiscal year, while enrollment grew 12.4 percent.

And the cost per person has fallen in recent years, according to DSS figures. Overall, it cost an average of $706 per month to cover a Medicaid client in the first three months of 2012. That dropped to $668 during the final three months of 2015, although the cost fluctuated within that time.

Gilbert said DSS reports the average monthly cost for each quarter because some payments are made on a quarterly basis and spending can vary significantly from month to month. The cost figures reflect when health care claims were paid, not when clients received care.

The biggest decrease occurred among adults without minor children – the group made eligible by the federal health law, whose portion of the program is known as HUSKY D. Their average monthly per-person cost fell from $823 during the quarter that ended in September 2012 to $690 in the first three months of 2014. (The state expanded HUSKY eligibility in two stages, starting with the lowest-income adults in mid-2010 and raising the income threshold on Jan. 1, 2014.) The cost dropped to $625 during the quarter that ended in September.

Costs were significantly lower, and more stable, among children and their parents, who account for about 61 percent of HUSKY clients, or close to 424,000 people as of September. In the quarter that ended September 2012, their monthly per-person cost averaged $331, compared to $316 during the quarter ending September 2015.

Nearly half of Medicaid spending covers the care of about 13 percent of clients – just under 95,000 seniors and people with disabilities, including those living in nursing homes. In the quarter ending September 2012, their monthly per-person cost averaged $2,328. It rose to $2,405 during the quarter that ended in September 2015.

McEvoy said a major factor in the cost stability of that segment of the program is the effort to provide more long-term care in people’s homes or other community settings, rather than nursing homes.

The state now spends 55 percent of the money used to fund long-term care on institutional care, down from 67 percent in 2007, said Deb Migneault, senior policy analyst for Connecticut’s Legislative Commission on Aging. And surveys show that those who have moved out of nursing homes are happier, she said.

“It’s a really dramatic change in the direction that we’re going,” Migneault said.

The health needs and costs of those who became eligible for Medicaid under Obamacare were big question marks of the health law: Would they have major medical needs after going without coverage?

National experience seems to indicate that the spike many anticipated from pent-up demand among the formerly uninsured didn’t occur, McEvoy said.

“That said, I think it’s very early to be drawing conclusions,” she said.

Is it possible Connecticut addressed some of the pent-up demand for care before the health law?

Dr. Robert Zavoski, DSS’ medical director, suggested that might have happened through the Charter Oak Health Plan, a state-run coverage option introduced by former Gov. M. Jodi Rell that was available to people, regardless of medical history, from 2008 to 2014. It covered many people with significant medical needs, including many who had gone for years without adequate care.

“We had a number of folks who came into care, and their problem list ran several pages,” Zavoski said. “And we had a couple people who were on Charter Oak for three or four days and had a transplant.”

By contrast, Zavoski said he suspects those newly covered by Medicaid are likely to be significantly younger and healthier, although he added that it’s still too early to tell how it will play out.

As of June, 35 percent of clients who were eligible as part of the Obamacare Medicaid expansion were aged 19 to 29, and another 16.5 percent were aged 30 to 39. Younger people tend to have lower health care costs.