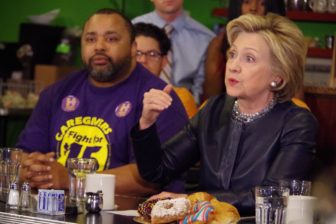 Presidential hopeful hillary Clinton speaks with a small crowd Saturday at Orangeside on Temple, a New Haven restaurant. At left is Terrell Williams, a New Haven native who works as a certified nursing and patient care assistant.

New Haven — Three days out from Connecticut’s Tuesday primary, presidential hopeful Hillary Clinton appeared in New Haven with a message: She is the strongest candidate for unions, service employees and working families,

Clinton’s pitch, given to an intimate crowd at the Orangeside on Temple restaurant, zeroed in on the fight to close the wage gap by raising the minimum wage from as low as $7.25 an hour to $15.

That’s because she doesn’t view things like sick time, family leave or raising the minimum wage as solely women’s issues, or family issues, she said. Instead, they are national economic issues, intimately tied to youth and education, and they’re vital to the 2016 presidential election.

For a little over an hour, a discussion revolving around economic disparity — which kept everyone in the room from so much as touching their platters of New Haven’s famous square donuts — served as Clinton’s springboard into a series of comments on how she plans to champion working families, improve public education, and raise the minimum wage if she wins the presidency in November.

That message resonated with many in attendance, some of whom are involved with the “Fight for 15” a national campaign to raise the minimum wage to $15 an hour, and with the effort to require paid family leave in Connecticut.

As New Haven Mayor Toni Harp spoke out for affordable housing and immigration rights advocate Mike Wishnie, a professor at Yale Law School, advocated for better protection for undocumented workers, many in the room jumped into stories from their own professions, discussing how difficult low wages and little-to-no paid leave had made their lives.

“We want for everyone to fulfill his or her own potential, to have a chance to get ahead and stay ahead — that’s what it’s all about,” she said to the event’s 25 attendees, a mix of home health care workers from the greater New Haven Area; Service Employees International Union (SEIU) members engaged in the “Fight for 15;” representatives of Leadership, Education and Athletics in Partnership (LEAP); and state and local government officials, including New Haven Mayor Toni Harp, U.S. Rep. Rosa DeLauro, D-1st District, and state Senate President Pro Tem Martin Looney.

“I fear that we are losing that dream,” she said. “There are many reasons for that … but we have to figure out what to do. We can’t just watch it, complain about it, pray about it, worry about it — we’ve got to figure out what to do about it. We have to pay attention to caregiving, because a lot of the families that I know, that I hear from are juggling those responsibilities.”

She was determined, she said, to hear out the voters who were most likely to fight for those issues. The approach was a departure for her New Haven campaign, which has otherwise been dominated by stand-ins and Get Out The Vote events from high-profile figures like Planned Parenthood CEO Cecile Richards and former Connecticut U.S. Sen. Chris Dodd.

“I want your ideas,” she said. “Both from your own lives, from your own work, from your own perspective. I do have a great fondness for New Haven … and Mayor [Harp], I want to be a good partner to you and to this city.”

That message resonated with many in attendance, who used the roundtable-style meeting as a chance to speak about their own experience as caregivers, educators and community members working jobs at, close to, or below the minimum wage. 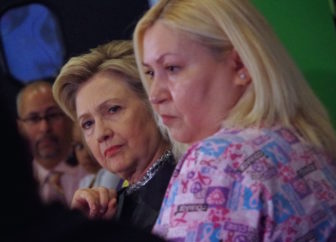 “I love my job,” said Terrell Williams, a New Haven native who works as a certified nursing and patient care assistant for $13.50 per hour, and is active in SEIU’s fight to raise the minimum wage. “It’s probably why I do so well in it. But, he said. “I’m in a situation where I work seven days a week, somewhere between 60 and 70 hours.”

“It’s just rough. I’m trying to be dependable, but mental health is a huge issue … it’s hard to keep your patients’ mental health at 100 percent when you’re having problems with your own,” Williams said. “Stresses are: which bill can I pay this month?””

Others echoed that sentiment. “I’m part of the Fight for 15, and she [Clinton] has spoken about how we need to get people out of poverty and bring up salaries for people to make a living in this country,” said Maribel Rodriguez, 47, a certified nursing assistant who works out of Waterbury.

“We’re the wealthiest country in the world and we need to improve within ourselves. We need equal pay [as well]. This is one of the reasons I am voting for Hillary, equal pay for women. She has the history of working in Congress to make changes, and she could do a great job as a president. We don’t get paid enough for the work we do. I take care of elderly residents in my nursing home, I’ve been there 29 years, and I struggle paycheck to paycheck.”

Clinton nodded solemnly. “People should have full-time jobs, with benefits … otherwise, you’re never going to get caught up.”