A car in which two victims were found, one of whom died.

A toxic batch of heroin laced with fentanyl appears to have hit New Haven, with firefighters and cops rushing to rescue 16 different people who overdosed on drugs — at least two of them fatally — between 3:30 and 9:30 p.m. Thursday.

“I don’t ever recall a day like this ever. I don’t think we’ve had this amount in a very, very long time,” said Assistant Fire Chief Matt Marcarelli. “We have barely enough Narcan to get throughout the night. We’re hoping it calms down. We used up almost the whole supply of Narcan in the city.”

The fire department was working on obtaining more Narcan from Yale-New Haven Hospital and AMR ambulance service in Hartford. [The Connecticut Department of Public Health announced Friday afternoon that it was sending 700 doses of Narcan to New Haven.]

Marcarelli said that while toxicology reports have not come in yet, the overdoses clearly appear to have been from heroin laced with fentanyl, in keeping with a trend throughout the state. “They had six [overdoses] in North Haven” in the past three weeks from heroin, he said.

City officials activated the Everbridge emergency phone-notification system at 10:30 p.m. to call people throughout town with this warning: “The City of New Haven is experiencing a public Health Emergency and therefore are placing an immediate warning of tainted life threatening heroin on our streets. Please be aware of this warning and its immediate life-threatening effect.”

The calls started coming in at 3:30 p.m. Six people had overdosed and gone unconscious within three to four blocks of each other on Lander Street in Newhallville, according to Marcarelli. Firefighters revived them using Narcan, a drug antidote used to treat overdoses.

Then came a first call from the parking lot at Bowen Field across from Hillhouse High School.

According to Lt. Douglas Harkins, the supervising officer on the scene, a baseball coach whose team had been training on Bowen Field alerted police to the first car, which had rolled into a fence bordering the field, after he saw it sitting motionless in the parking lot for an hour and a half.

A single shoe — a light blue Converse with dark blue laces — lay outside the driver’s side of that car. 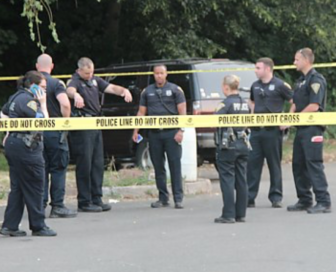 Police at Bowen Field, across from Hillhouse High School

Firefighters and police found two men passed out in a car near the baseball diamond at around 6:35 p.m. They showed obvious signs of a drug overdose, according to Marcarelli.

At the scene, police were alerted to a second car, parked in the corner of the lot next to a row of trees.

Police found three more men in the same state in that car.

Sgt. Alberto Merced said the police have not found drug paraphernalia in either vehicle.

“There may not be anything in there,” Merced said. “They may have used their narcotics in a different location and then moved here.”

But, he added, it is still early days: Fresh evidence could turn up any minute.

The Fire Department administered Narcan to the victims, four of whom were successfully revived. The fifth victim — one of the two discovered in the first car — remained unresponsive. All five victims were taken to Yale-New Haven Hospital.

All of the victims appeared to be approximately the same age as the man who died, according to police. One of the five men, after reviving later at the hospital, admitted to police that the group had been using drugs.

The suspected overdoses interrupted a warm summer night in a vast parking lot that neighbors often use as a community gathering spot. A crowd of around a dozen men sat in lawn chairs just yards away from the caution tape surrounding the second car.

“You have to look out for your fellow man,” said one of the men in the lawn chairs. “But I’m not here to look out. I’m here to enjoy myself.”

All of the men sitting in the lot said they did not become aware of the overdose until police arrived.

“In less than 100 yards, you had five people overdose in the same time span,” said Police Chief Dean Esserman, surveying the scene. “I’ve never seen that before. If you don’t believe Narcan works, you have to witness it. Lives were saved tonight.”

More calls followed the Bowen one: Another two overdoses back in Newhallville, then two more around 9 p.m. at the Walgreens parking lot at George and York streets. One of the two women found there — a mother and a daughter — went into cardiac arrest.

Fentanyl has become a popular additive among heroin dealers in the U.S. It produces a more intense high. It also kills more people.

“Fentanyl is 80-100 times more potent than heroin,” Marcarelli said, “so it requires that much more Narcan to reverse it.”

Police Lt. Tony Reyes said police plan to meet with the fire department Friday morning to assess the tragedies from Thursday night, share information, and plot strategy. He said they will also work alongside the federal Drug Enforcement Administration, which with the U.S. Attorney’s Office has established a task force to deal with the heroin/fentanyl epidemic. Read about that here.

This story was originally published in the New Haven Independent.