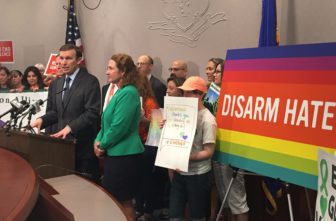 After a 15-hour filibuster in the U.S. Senate and a 26-hour sit-in on the floor of the U.S. House in the past week and a half, members of Connecticut’s congressional delegation conceded Friday that new gun legislation is probably dead in 2016.

U.S. Sen. Chris Murphy, D-Conn., said the chances of passing a new bill are “very slim,” but added he was proud of the effort that has been made since the Orlando nightclub shooting in the early morning hours of June 12.

Murphy’s assessment of the chances for new legislation came after a Senate compromise bill avoided being tabled Thursday, but fell short of the 60 votes that would be needed to end a filibuster and force a vote on it. The bill, presented by U.S. Sen. Susan Collins, R-Maine, would have prevented gun sales to those on the no-fly list and the so-called selectee list – a list of persons subjected to closer scrutiny when they fly. The bill received the support of 52 senators, including eight Republicans.

Republicans have criticized the filibuster and the sit-in as “publicity stunts” and a pretext for fundraising. Though he denied fundraising was a goal, Murphy agreed Democrats were looking ahead to the November elections when calling for votes on gun laws.

“This is political,” Murphy said. “And we shouldn’t be ashamed to talk about the fact that there has to be a political element to everything that we are doing right now. Part of the reason that we wanted these votes – to be quite honest with you – was to put members on the record, so that their constituents can see where they stand.”

The “elephant in the room,” U.S. Sen. Richard Blumenthal, D-Conn. said, is that Republican leaders in the House and Senate want to spare their members from votes because of the political consequences.

Blumenthal also criticized those who disapproved of the rule-breaking sit-in, arguing the decision to break House rules provided “a platform to use the First Amendment.”

“If you think that sit-in was a stunt, so was the Boston Tea Party, the ’60s Civil Rights sit-ins, the peace marches against the Vietnam War,” Blumenthal said. “That sit-in was in the time-honored tradition of dissent.”

One of those critics, Rep. Dan Carter, R-Bethel, who is running against Blumenthal in the U.S. Senate race this fall, called the Democratic efforts “PR charades” for bills that would not have prevented the 2012 shooting in Sandy Hook or the June 12 shooting in Orlando. 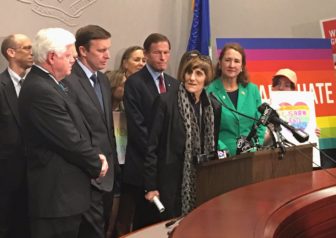 “I wish they hadn’t,” Larson said. “There was no conversation with members on the floor.”

Larson was noncommittal about whether Democrats plan to resume their sit-in when the chamber returns from recess on July 5.

He also acknowledged the protest on the House floor violated the chamber’s rules, and he refused to fault House Speaker Paul Ryan, R-Wisc., for turning off the cameras in the chamber.

Since the Orlando shooting, which killed 49 people and wounded 53 others, Democratic lawmakers have been pushing the Republican leaders in both chambers to allow votes on universal background checks and a ban on gun purchases by those on federal watch lists.

Murphy’s filibuster on June 15-16 resulted in votes on five different bills in the Senate, all of which failed to reach the 60-vote threshold necessary to advance. Each party presented their own versions of the two proposals, but votes broke down along party lines. The fifth bill, which Collins crafted with members of both parties, was seen as the best chance to reach 60 votes.

The House has not held any votes since the Orlando shooting, prompting the Democrats’ sit-in. The protest eventually wound down when Republicans adjourned the chamber two days early for the July 4 recess. The House is scheduled to reconvene on July 5.