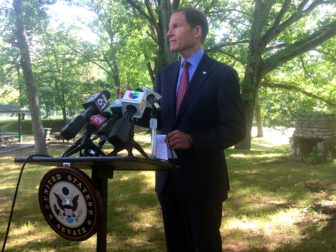 The push for legislative action comes as Florida’s governor announced as many as 14 cases of the Zika virus in his state may have been caused by mosquitos carrying the virus locally, according to the Associated Press.

“There is no political gain in Zika spreading around the United States,” Blumenthal said. “It benefits no one, and the blame will be shared by everybody in public office if Congress fails to do its job and this epidemic spreads.”

Both the House and Senate are currently in recess and will not reconvene until September.

Democrats in Congress have no power to force either legislative chamber to reconvene, but Blumenthal said he is “hopeful” the Senate will return because Republicans have shown a willingness to address the issue with new federal funding before.

Murphy also supports the emergency session, his spokeswoman said, adding that he “believes that Congress has a lot of unfinished work to do.”

In a tweet Monday, Courtney called on House Speaker Paul Ryan to bring the House back from recess as well.