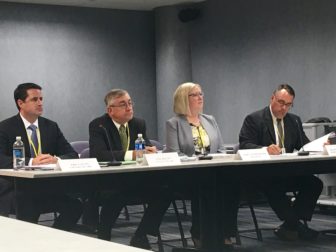 ConnectiCare officials listen during a public hearing on their proposed rate increases Thursday.

After proposing sharp rate increases for next year’s health insurance plans for individuals and small groups, a trio of insurers faced a barrage of criticism from elected officials and the public during a series of hearings Wednesday and Thursday.

The insurers – Anthem, ConnectiCare and Aetna – said that changes at the federal level and a sicker customer pool have created the need for their proposed double-digit rate increases.

In addition to drawing the public’s ire, the proposed rate hikes drew close scrutiny from officials of the state Insurance Department, which is responsible for accepting, adjusting or denying the rate proposals.

Many of the proposed increases average between 25 percent and 35 percent for individual plans – some sold on the state health insurance exchange and others off the exchange. In their comments on the rate hikes, many consumers said the proposals would mean paying hundreds of dollars more per month for health insurance.

One of the insurers, ConnectiCare, revised its proposal several times before its hearing Thursday. It initially proposed a 24.1 percent increase on individual plans off the exchange. Multiple revisions later, including one on Wednesday, ConnectiCare is now proposing an average rate increase of 42.7 percent on individual plans sold outside of the state’s health insurance exchange. It is requesting an average rate increase of 14.3 percent for plans on the exchange.

“It just shows a remarkable insensitivity and a detachment to the real economic burden that’s placed on their consumers,” said state Sen. Tony Hwang, R-Fairfield.

Though not required by statute to hold the hearings, the Insurance Department scheduled them because of the size of the proposed rate increases and the large number of insurance customers who would be affected, said department spokeswoman Donna Tommelleo.

The department can adjust or reject proposed rates if they are determined to be “excessive, inadequate or unfairly discriminatory.” Insurance Commissioner Katharine L. Wade will make the final determination, but she will draw heavily from a recommendation by Jared Kosky, the department staff attorney designated to preside over the three hearings.

The department also received more than 450 public comments submitted online by people who expressed confusion, anger and fear about the proposals. More than a dozen individuals – some activists, others just concerned policyholders – showed up to testify in person. 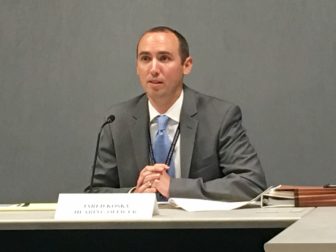 Jared Kosky, who served as hearing officer, will present the insurance commissioner with his final recommendations for action on the proposed increases.

“We’re not consumers,” Hyre said. “We’re not customers. We are people, and we are patients. That’s the bottom line.”

While there was disagreement over whether the Affordable Care Act or corporate greed – or some combination of both – were to blame, many said the proposed rate increases would be too expensive for them to handle. Some said they would rather pay a tax penalty for not having health insurance than deal with the unaffordable premiums.

Actuaries and financial officials with the insurers argued that significant rate increases are necessary to maintain the current quality of care.

State regulators spent more than an hour picking apart details of each of the proposals from Anthem and ConnectiCare. Aetna faced the fewest questions. Its testimony and cross examination ran only about 30 minutes.

ConnectiCare received the most questioning, in part because it submitted a revised increase request the day before. Officials from the insurer said they requested the late change largely because they reevaluated how they would handle large risk adjustment payments mandated by the federal government.

Under the Affordable Care Act, insurers with generally healthier customers – those with lower risk – are required to pay back a portion of their profits, which are redistributed to insurers with higher-risk customers.

Despite its large payment in 2014 and indications that it would have an even larger payment in 2015, the company did not build any increase into its 2016 premiums to account for this, company officials said. Now, they say, they have built the entire anticipated cost into their proposal for 2017.

Another federal program – meant to keep premiums lower on state insurance exchanges in the early years of the Affordable Care Act – is creating more complications. After this year, a federal reinsurance program will end, taking away what was, in effect, a subsidy for higher-cost enrollees. Starting in 2017, that subsidy will no longer be provided, shifting the cost back to insurers.

In addition, all three insurers said they expected that customers they would lose from their coverage pool next year would be healthier than those who remained or joined, adding to expected costs. 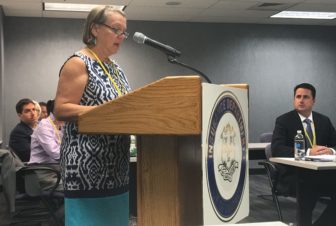 Lynne Ide, director of program and policy for the Universal Health Care Foundation of Connecticut, argues against the proposed health insurance rate hikes.

Many of the critics of the increases, however, countered that the insurers had shown large profits in recent years. Crisco said Anthem had $2.5 billion in net income in 2015.

“I think it’s time that we consider the net income of the various companies who make these requests,” Crisco said Wednesday. “I’m asking the department to deny any rate increase whatsoever.”

Activists are calling on state legislators to give the Insurance Department statutory authority to make the affordability of proposed rate increases a criterion for evaluating requests. Lynne Ide, director of program and policy at the Universal Health Care Foundation of Connecticut, said the state should adopt the model used in Rhode Island, which includes affordability.

“Unaffordable health insurance is a more expensive version of being uninsured,” Ide told regulators. “Because, in fact, if your insurance – with your co-pays, deductibles, cost-sharing, whatever – is so high, you’re not going to use it.”

Hwang blamed the rate increases on a “broken system” under the Affordable Care Act. He cited HealthyCT, the Connecticut insurance co-op which was declared financially unstable after being required to pay $13 million into the federal risk readjustment program. Hwang said this illustrates how the system is working against itself.

However, Hwang, a Republican, said he is not rooting for the Affordable Care Act to fail. He wants everyone to have affordable and convenient access to health care, he said, but there are clear signs that the system needs repair.

The rate proposals, as of Aug. 3, are shown below: 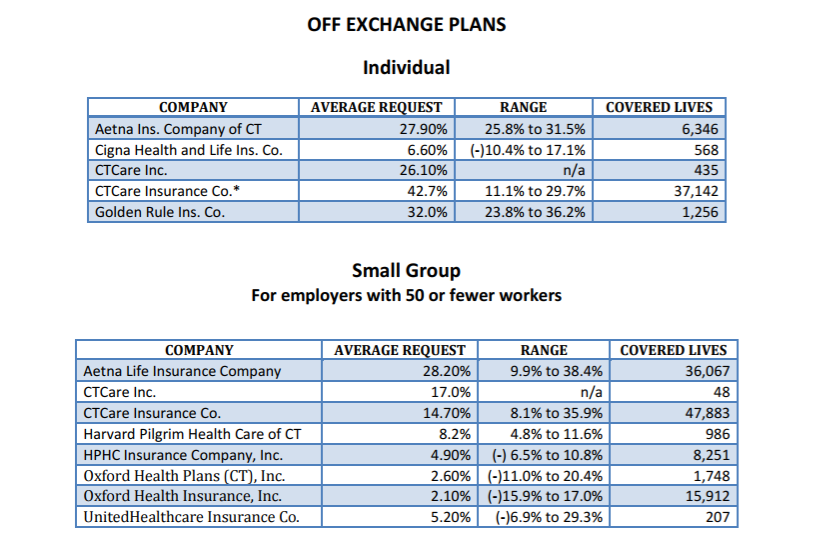