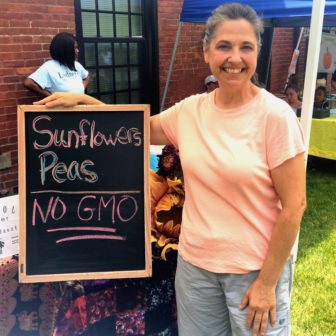 Rebecca Salva, co-founder of Biossential Greens, LLC in Hartford, holds up a sign telling customers her products do not have genetically modified ingredients.

Rebecca Salva quit her corporate job two years ago to launch Biossential Greens, LLC, an urban farm in Hartford specializing in microgreens – young vegetables. She and her husband, Mark, who quit teaching to join her in the endeavor, are working to change a food system she said is broken.

When Rebecca learned that U.S. Sen. Richard Blumenthal, D-Conn., was going to be at the Billings Forge Farmers Market in Hartford Thursday, she made a point of including “NO GMO” on a chalkboard sign at her booth. Rebecca said she believes, like Blumenthal, that consumers deserve the opportunity to decide on their own whether to buy food containing genetically modified organisms – which means those products would have to be clearly labeled.

But new legislation signed by President Barack Obama in July is set to roll back stricter labeling laws in states like Connecticut and Vermont, replacing them with a less stringent federal labeling requirement.

Blumenthal told a crowd of about 20 people at the farmers market that he will fight federal preemption of state labeling laws and plans to introduce legislation to repeal that provision in the next session.

“Consumers can vote with their feet and their pocketbook even if their elected representatives are not voting as they would like,” Blumenthal said. “Every survey of public opinion shows that the American people want this information.”

Any legislative change would face a steep battle in Congress, but Blumenthal hopes new members elected this November will be receptive. 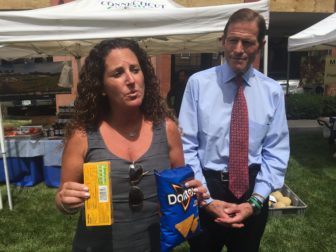 The bill specifies that companies can fulfill the labeling requirement by placing a QR code on the product. Consumers could then use a smartphone to scan the QR code and obtain information, including whether the product contains GMOs.

But not everyone has a smartphone. Tara Cook-Littman, chair of Citizens for GMO Labeling, said this means it “is really not a solution at all.” She thanked Blumenthal for continuing to address the issue.

The Food and Drug Administration maintains that all genetically modified foods in the United States are safe.