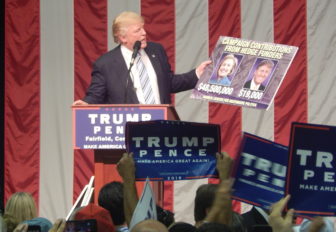 Republican presidential candidate Donald J. Trump holds a sign he said showed how little he had received in contributions from people who work at hedge funds compared to Hillary Clinton.

Fairfield – Republican presidential nominee Donald J. Trump brushed aside skepticism about his decision to campaign in a deep-blue state and drew about 5,000 people to a rally here Saturday on the hottest day of the year.

The crowd, tightly packed and drenched in sweat, filled Sacred Heart University’s William H. Pitt Center to hear Trump, who tailored his message to include heavy criticism of Gov. Dannel P. Malloy, a litany of statistics about the state’s sluggish economy, and the pointed question, “How did you lose General Electric?”

Those waiting in line endured a heat index that registered at more than 100 degrees. The crowd thinned as the speech dragged into the evening and the sound of thunder filled the arena.

Trump’s decision to come to Connecticut raised eyebrows, given the state’s solidly Democratic voting record in recent years. Democrats control the governor’s office, both chambers of the state legislature, all five seats in the U.S. House and both seats in the U.S. Senate. A Republican presidential candidate has not taken the state since George H.W. Bush, who grew up in Greenwich, won it in 1988.

Introduced by a cadre of Connecticut Republican leaders, Trump put forward a message to the raucous crowd he hopes will resonate until November – the Nutmeg State is in play.

“We’re making a big move for the state of Connecticut,” Trump said. “Normally, that wouldn’t happen because a Republican, in theory, doesn’t win Connecticut.”

Trump repeatedly bashed Gov. Malloy, whose favorability rating in the most recent poll was 24 percent. He railed against Malloy’s management of the state’s economy, and said General Electric never would have left if Trump were governor.

Republicans leaders say Trump sees an opening, one driven by the unpopularity of his presidential opponent, Hillary Clinton, and the Democratic leadership in Connecticut. But Democrats countered that Trump’s decision to campaign in Connecticut is foolish at best and incompetent at worst.

Much of the rally followed Trump’s familiar playbook. He reiterated the bedrock arguments of his campaign: build a wall along the Mexican border, negotiate better trade deals with foreign nations, and stimulate economic growth through lower taxes and fewer regulations.

Trump was about five minutes into his speech when he first made mention of “Crooked Hillary” – his nickname for the Democratic nominee, former first lady and U.S. senator. But he directed as much ire, if not more, toward the media.

Trump began his speech about 30 minutes late, delivering an hour-long attack, bobbing and weaving between state and federal issues. It included more media criticism than usual, inciting sympathetic boos – directed at the press area – from the crowd. His major targets were CNN and The New York Times, which he called “a garbage paper” and whose campaign press credential he threatened to revoke.

On several occasions during the speech, Trump hammered Malloy for the state of the Connecticut economy and the announced departure of Fairfield-based GE to Boston earlier this year.

“It is the least fiscally healthy state in the union, and it just lost General Electric,” Trump said. He made a point to single out “the great” John Myers, a former CEO of General Electric’s asset management division, who was in the audience.

His criticism of Malloy, who Trump said is “busy” working to find himself a job in Washington after the election, was summed up in one line: “I wouldn’t hire him.”

Trump said he was “riding to the rescue” and would bring jobs back to Connecticut, and urged residents not to leave the state.

“Relax, don’t move,” Trump said. “The good news is, you can’t move, because you can’t get anything for your house.” 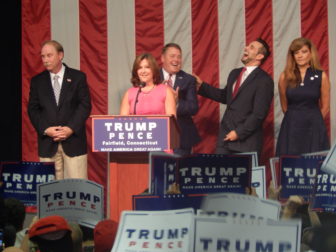 “If Hillary Clinton wins the presidency, Dannel Malloy will get a promotion,” Romano told the crowd. They responded with loud boos.

Romano said Clinton would bring Malloy’s failed economic policies from Hartford to Washington, D.C., asking, “Do any of you want that?”

The crowd responded in unison with a resounding, “No!”

State Republican leaders hammered Clinton for her decision to hold a fundraiser in Greenwich next week instead of a rally like Trump. Romano said Clinton is “ringing the cash register” while Trump is meeting with real people.

Other Republicans at the rally joined in criticizing Clinton, including state Rep. Dan Carter, R-Bethel, who is challenging Democratic U.S. Sen. Richard Blumenthal this fall. Carter spent much of his speech comparing Blumenthal to Clinton, saying both candidates are untrustworthy.

Carter panned Clinton as being “more of the same.”

More than 1,000 people waited in line – the earliest arriving at 7:30 a.m. – before the doors opened at 4:30 p.m. The rest poured into the building in the hours that followed.

Cheri Albaugh, a 58-year-old New York City resident, said she got on the first train out of the city Saturday morning to get to Sacred Heart University for the rally.

Her thought was, “If I’m gonna do this, I might well do this.” It was her first Trump rally, though she said she has been a supporter from the beginning. She acknowledged Trump had his shortcomings.

“I know he’s not an angel,” Albaugh said. But, she said, he will succeed in accomplishing the reforms he has proposed if elected.

Those waiting in line were ecstatic to see Trump campaigning in Connecticut.

“He wouldn’t be here if he didn’t think he had a shot to win here,” said Mitch Beck, a 54-year-old executive recruiter from Monroe. “He thinks he’s got a shot to flip it.”

Whether Trump wins or loses the election is entirely within his control, Beck said. If Trump can draw attention to Clinton’s checkered past instead of getting caught in his own “misspeaks,” he said, then he will cruise to victory after the debates.

Beck still has reservations about Trump, but they are more about Trump’s ability to win than the message he is bringing to voters. He admitted Trump is not a perfect candidate, and compared him to other outsiders, like 1992 independent presidential candidate Ross Perot and 1996 Republican presidential primary candidate Pat Buchanan. He said both were flawed messengers delivering the right message. 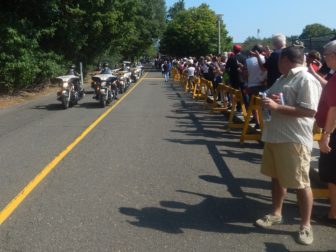 More than 1,000 people lined up before doors opened at Donald Trump’s rally in Fairfield Friday.

Beck said Trump is similar, a man who can’t be bought, and will run the country without outside influence. At the end of the day, Beck said, he is relying on Trump’s potential to fix the economy.

“If Bush put the economy in the grave, Obama put the dirt on top of it,” Beck said. “I hope Trump has a shovel.”

Not everyone at Sacred Heart came to support Trump, however. About two dozen local Democrats gathered at the entrance to the university’s campus to protest Trump visit with one message – “Love Trumps Hate.”

“I think if you’re a legitimate candidate … you need to disavow Trump,” state Rep. William Tong, D-Stamford, told reporters before the rally.

“Donald Trump stands for everything we in Connecticut stand against,” Democratic Party Chairman Nick Balletto said in a statement before the rally. “Trump has shown time and time again that he is temperamentally unfit and lacks the judgment to serve as commander-in-chief.”

Tong expressed skepticism of the notion Connecticut would be in play this November, saying if Trump’s campaign believes it to be true, it should commit money and resources here.

Others were not as gracious in their assessment of Trump’s decision to come to Fairfield.

“He’s in his own reality,” said Steven Sheinberg, chairman of the Fairfield Democratic Town Committee. “He’s foolish to come to Connecticut.”

His campaign staff’s decision to allow him to come to Connecticut, Sheinberg added, shows that they are “incompetent.”

Quinnipiac University conducted the most recent poll in Connecticut at the beginning of June, which showed Clinton ahead of Trump by 7 percentage points. Clinton received 45 percent support while Trump was at 38 percent. Both had high unfavorable ratings.

State Sen. Michael McLachlan, R-Danbury, said he was glad to see Trump making a “pit stop” in a traditionally Democratic state at this stage in the campaign. But, he said, Trump still “needs to spend a lot of time in Ohio, Pennsylvania and Florida.”

Romano said the unpopularity of Clinton and Malloy bring the state into play, despite its strong Democratic tendencies in recent years. “Hillary Clinton is one of the most distrusted candidates in the history of the United States,” Romano said, adding that she has the same economic policies as Malloy.