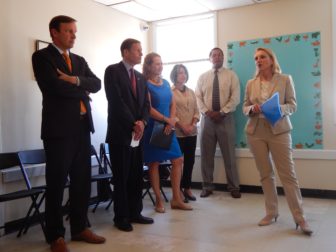 Housing Commissioner Evonne Klein, right, speaks at a press conference in Waterbury Tuesday. She is joined three members of Connecticut’s congressional delegation and others.

Waterbury — Connecticut is on pace to eliminate chronic homelessness by the end of the year, the state’s top housing official said at a press conference in Waterbury Tuesday.

State Housing Commissioner Evonne M. Klein said increased coordination between providers and government officials has helped make “significant progress” toward housing the state’s chronically homeless – those who have a severely disabling condition and have been homeless for longer than a year

“We’ll always have a homeless population, but what we know today is that we can house them,” Klein said. “We have a system in place to identify homeless people and rapidly house them. So we’re – this is important – ‘exiting’ people out of homelessness, not managing them.”

The goal of ending chronic homelessness was set when Gov. Dannel P. Malloy signed onto the “Zero: 2016” initiative two years ago. Malloy was one of only four governors to do so. The state announced last fall that it had ended chronic homelessness among veterans, becoming the first state in the nation to do so.

“Connecticut has been a national leader in our efforts to end both veteran and chronic homelessness, and we are proud of the significant role our state has played in helping the nation reach this major milestone,” Malloy said in a statement. “Ensuring and delivering housing for our most vulnerable is critical to building stronger communities for everyone, everywhere.”

State housing officials say chronically homeless individuals are considered “high need” because of the amount of support they require once they have been placed in homes.

Since the beginning of last year, 981 “high need” individuals have been placed in permanent housing, according to Lisa Tepper Bates, executive director of the Connecticut Coalition to End Homelessness. In the greater Waterbury and Litchfield County region alone, Tepper Bates said, 43 chronically homeless individuals have received housing since October.

“We’ve been able to do this great work because it’s a very powerful team,” Tepper Bates said. “It’s the nonprofit providers on the ground, on the street, in the shelters, providing the permanent supportive housing, and a powerful combination with our federal resources … and also our state resources.”

Blumenthal touted the state’s success in ending veteran chronic homelessness last year. He said the partnership between private providers and government officials developed by Klein and the Housing Department is broader-reaching than that of many other states, providing homeless individuals with access to counseling, jobs and health care. 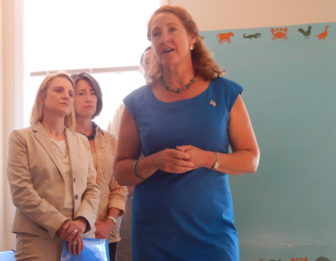 While the state is nearing its goal of ending chronic homelessness, Esty told those in attendance the next goal should be much bigger.

“You are on the frontlines of ensuring that we, as a society, care for the least among us and get people back on their feet,” Esty said. “So we want to end not just chronic homelessness, we want to end all homelessness and ensure that people have that opportunity each and every day to know that they have a safe place for themselves, for their children – that they have a home.”

If the state meets its goal of ending chronic homelessness this year, Klein said, the next priority would be family and youth homelessness. Esty said some of the homeless youths are LGBTQ individuals who felt unwelcome in their own homes and ran way or, in some cases, whose parents had thrown them out. Klein said she is seeing this trend as well.

“Even loving families sometimes don’t make the right choices about their own children,” Esty said. “And you can wind up with kids just trying to be who they are.”

Continuing to tackle homelessness requires a steady stream of state and federal funding, which Murphy was quick to point out. He said the United States does not “dream up enormous dreams” anymore, but should start doing it again – especially with homelessness.

“When you’re listening to people promise big tax cuts, elimination of the estate tax, remember what that means,” Murphy said. “If you want to give away big tax cuts at the federal level, all that means is we have less money to meet our big audacious goals back here. You need resources to get this done.”