He survived and continued walking unaccompanied into the city, where he announced that the encounter gave him a new idea to bring back to the Senate after Labor Day.

The scary vehicular encounters and resultant brain storm — to patch up parts of the state that aren’t friendly to people who want to get to work without cars — unfolded on Day Four of a peripatetic town hall Murphy has been conducting, which his office dubs “Walking Across Connecticut.”

Murphy began his walking tour of Connecticut, which his office is tracking with updates of his encounters, on Monday in Voluntown near the Rhode Island border. From there he logged about 70 miles to East Haven, where he ended Wednesday with a town hall. 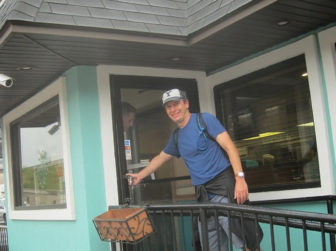 With rain slicker tied around his waist, Murphy arrives at Cody’s for a break.

Thursday morning he woke and continued putting one foot in front of the other, arriving around 9 at Cody’s 24-hour diner on Water Street at the border of Wooster Square. He held a private meeting, touched base with his assistant Brent Maddux, used the gents room, then resumed walking three quarters of a mile to the Green, where he held a press conference.

Murphy is traveling alone. He said he’s in search of the Connecticut that you can’t find in articles, statistics, and abstract summaries of issues and crises facing the state.

“If you’re not physically and emotionally connecting to to your job [as a senator], you’re not doing it,” he said as we walked along Chapel Street toward the Green.

At Chapel and Orange.

In the past Murphy has spent a day shadowing a homeless man through his day in New Haven, he’s met with people and their helpers struggling with the opioid crisis,  and frequented malls and department stores on his own to get a feel for the people whom he represents.

Yet this is the first time he — or, to his knowledge, any Nutmeg senator — has walked across the entire state.

“You’ve got to talk to people you’ve got to feel people’s emotional challenges and their hopes and dreams.” he added.

An example he offered was a man roughly the senator’s own age whom he encountered at a gas station in Clinton on Wednesday. “His name is James,” said Murphy. James has four kids, one of whom is blind and the other autistic. A dry-waller, James works hard, is doing everything we ask of him,  but “he can’t keep food on the table.”

Murphy said that James walked him through the family’s painful decisions whether to pay the food or the rent. When Murphy talks about the growing crisis of the working poor, which he referenced in his press conference at the Green, he said he will think of James.

“James is someone I never would have met had I not walked across the state.”

On Chapel Street discussing the homeless issue, where it lives.

In groups and singly, Murphy estimated, he’s talked to about 150 people so far in his journey, which will take him to Bridgeport Thursday night and then, if his legs hold up, to Greenwich on Friday.“You’ve got an obligation on this job to contact people who wouldn’t come to your office,” he said.

Sure enough, as we entered the more populous part of Chapel Street, at the bus stop near Orange, Murphy chatted with Bruce Sherents, a homeless man. Sherents told him of what he considered the unsanitary conditions in the city’s shelters.

Farther down the block, he encountered Alberto Souffront, who was waiting for the bus to take him to his job at Burger King. Souffront didn’t approach the senator. The encounter occurred the other way around. As soon as the senator identified himself, out poured Souffront’s dilemma: His chosen field is working in the helping professions, most recently at the Advanced Nursing and Rehabilitation Center on Davenport Street.  He was laid off five months ago, he told the senator, but with the understanding that they would call him to return.

Souffront could afford to wait no longer. So he took a job at Burger King, where he has been employed for five months. “I called when they didn’t call me,” he told Murphy, but no one has gotten back to him. Souffront said he then tried to get a job at Yale but was told they are not hiring.

Murphy offered encouragement. But he offered no quick fixes or false promises to the unemployed, under-employed, and homeless folks he met en route to the Green; to several he gave his card.On the Green at the formal press conference, Murphy cited several reasons for the walking tour. First, he said. you get a sense of the diversity of opinion and what issues matter to people where.

In eastern Connecticut, for example, Murphy heard a lot about guns and was impressed by how many people have absorbed the hype that he and the policies he supports are angling to take away people’s firearms. He said he immediately explained that he’s advocating background checks and other common-sense measures. Then the conversations grew more civil.

In New Haven, Murphy said, he hears about guns, but from a different perspective. In New Haven he also hears a lot about homelessness, not a subject discussed in the eastern part of the state, by evidence of the walking tour thus far.

Falling in love again—with the state

“I’ve done a lot of walking, but never across the state,” said Florestine Taylor to the senator.

“This is a diverse place, different takes on the same issue. But you can feel it in a truly organic why when you walk,” Murphy said.He added that when he’s walking in a T-shirt, shorts and cap, people open up to him with more candor than if he encounters them wearing a suit and a Senate lapel pin.

Finally, he said, the trip reminds him of not only the diversity of the people of Connecticut. And given the time a hundred miles of solo walking provides, “you get a sense of how beautiful the state is. You fall in love with the state all over again.”

City transportation czar Doug Hausladen presented the senator with a “Smart Streets” traffic-calming wrist bracelet and an “official” New Haven pedometer as the city launches its latest participation in GoNewHavenGoCarFree Challenge. “Hopefully this has also been a great advertisement for getting out of your car and walking,” Murphy said of his trek.

His insight, when he was struggling along Route One in East Haven, was that there are likely many low-income people who work in the fast-food and other similar businesses along those sidewalk-less strips, and they really have no way to get to their jobs without a car. He promised to pursue that issue when Congress resumes after Labor Day.

With his gifts in hand, Murphy was accompanied by the transportation brain trust down Church Street toward Howard Avenue, where the crew would turn left to Kimberly and from there point the senator in the direction of West Haven.Next stop, Bridgeport.

The senator’s assistant Brett Maddux said Murphy has been staying with friends and family along the way, that he is young, able-bodied, and doesn’t like to be surrounded by an entourage. “He likes to be a real person,” he added.