Trump’s debate claim on health care costs: It depends what you mean by ‘cost’

Health care finally came up as an issue in the second presidential debate in St. Louis Sunday night. But the discussion may have confused more than clarified the issue for many voters.

During the brief exchange about the potential fate of the Affordable Care Act, Republican Donald Trump said this: “Obamacare is a disaster. You know it. We all know it. It’s going up at numbers that nobody’s ever seen worldwide. Nobody’s ever seen numbers like this for health care.”

Let’s parse that discussion of costs piece by piece. Because when it comes to health care, there are many different types of costs: those for governments, employers and individuals. And those costs don’t always go up and down at the same time.

First, the federal government’s spending on the Affordable Care Act’s insurance is coming in under budget projections. According to the official scorekeeper, the Congressional Budget Office (CBO), in March, the net cost of the insurance coverage provisions of the law — including tax credits to subsidize some lower-income customers’ premiums and costs for adding people to Medicaid — “is lower by $157 billion, or 25 percent” than the estimate when the law was enacted in 2010. 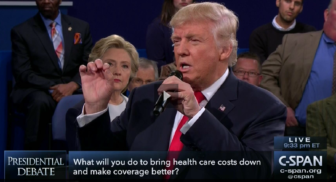 Click to view the candidates\’ exchange on health care costs during the second presidential debate.

Much of that is because CBO originally estimated that large numbers of employers would stop providing insurance to workers and send them to the law’s online marketplaces, where many of them would get federal subsidies. That didn’t happen. Medicaid spending increased more than CBO projected, but that was more than offset by the lower spending on tax credits.

What Trump was almost certainly referring to when he talked about costs going up were reports of increases in premiums for the marketplace plans. Those are for people who don’t have employer coverage and don’t qualify for a public health plan, such as Medicare or Medicaid. About 18 million Americans use those marketplaces, or exchanges.

And on average, premium prices in states that have announced their rates are going up next year at much higher rates than for the previous two years, although the final tallies won’t be known until all the rates are released later this month. Charles Gaba, who crunches numbers for his blog, ACASignups.net, estimates a national average premium increase of around 25 percent.

Earlier in the debate, Trump noted that under the law, “your health insurance and health care is going up by numbers that are astronomical, 68 percent, 59 percent, 71 percent.” And there are reports of very large increases like those, including in Oklahoma, where premiums in the individual market could rise anywhere from 58 to 96 percent. Even in California, which has what is generally considered a successful marketplace, rates are going up an average of 13.2 percent for next year.

There are several reasons for the increases. One is that insurers charged premiums that were simply too low to begin with, and now they are catching up in order not to go broke. Another goes back to the CBO prediction above, about employers sending workers to the individual market to buy their own insurance. When that didn’t happen, insurers didn’t get the influx of generally healthier people to offset the costs of the sicker people who the law made eligible for coverage for the first time.  A recent study from researchers at the Brookings Institution found that premiums in that market are actually lower than they would have been had the law not been passed.

But even with premiums rising in many (though certainly not all) areas of the country, about half the people who buy insurance on the individual market won’t feel much of that increase. Tax credits will increase to cover most of the hikes for those who bought through the exchanges, and in many places consumers can save money by changing plans. Even with an estimated 25 percent premium increase, the federal government projects, 78 percent of marketplace consumers should be able to find a plan that costs $100 per month or less. Another estimated 2.5 million people are purchasing coverage on their own who could be getting tax credits.

Meanwhile, the majority of Americans get coverage through an employer, and that market is seeing historically low premiums increases. A recent report from the Kaiser Family Foundation found family premiums for employer-coverage rose an average of 3 percent in 2016, continuing several years of much-lower-than-average hikes. (Kaiser Health News is an editorially independent project of the Kaiser Family Foundation.)

However, consumers at every level are feeling more financial pain when it comes to health care. While premiums for most people  have increased slowly, workers and individual insurance purchasers are being asked to pay much larger deductibles before their health insurance kicks in. When insurance does pay, patients also are being asked to contribute more for their share of the services. And even the slow rate of premium increases is often more than the growth in workers’ wages, so it eats more of their paychecks.

At the same time, however, health care spending overall (as measured by the federal government) continues at a historically slow rate. Spending in 2014 (the last full year analyzed) was up 5.3 percent. That was only slightly higher than the five previous years, which included the smallest increase (2.9 percent in 2013) recorded since government officials began keeping track more than a half century ago.

Nonetheless, health spending is going up faster than the economy as a whole, thus consuming more of the nation’s resources. And Trump is correct about U.S. health spending not looking good next to the rest of the world. The U.S. spends one-third more per person on health care than the next highest-spending country (Switzerland), and more than twice the average for industrialized nations. Yet Americans are not healthier than most of our international counterparts.

This story was originally published by Kaiser Health News, a national health policy news service that is part of the nonpartisan Henry J. Kaiser Family Foundation.

by Jay Williams and eight others

Connecticut is at risk of missing out on billions of dollars of federal revenue it should rightfully receive.  The reason: many state residents will needlessly be undercounted in the upcoming Census.