Advocates give legislators a ‘mental health 101’ 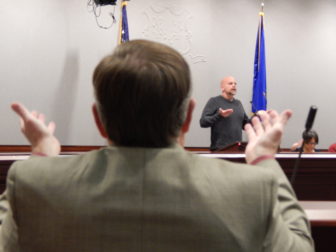 The Litchfield Republican and the handful of other newly elected or returning legislators who came heard about legal rights and supportive housing, addiction and recovery, the needs of young adults and holistic healing. They participated in a grounding exercise, raising upturned hands and taking deep breaths.

They heard personal stories and policy pitches, suggestions about what to prioritize as they face a massive budget deficit in the coming year, and some joking sympathy (“God bless you, and I’m sorry,” acting Healthcare Advocate Demian Fontanella told the lawmakers).

The legislative session begins Jan. 4, and, as they do every year, lobbyists and advocacy groups are employing various strategies to capture lawmakers’ attention.

The Keep the Promise Coalition, a group of mental health advocates, began offering their training two years ago, hoping to give legislators a more holistic picture of the issue than debates on specific subjects – such as state-funded services – might bring. It’s also part of an effort to separate discussions about mental health from those about public safety, trying to push back against policies driven by the premise – false, according to experts – that people with mental illness are more likely to commit violence. 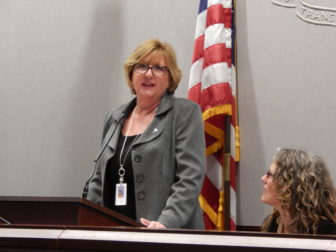 Rep. Gary Byron, R-Newington, who serves on the Human Services Committee and worked in mental health decades ago at the Institute of Living, urged his future colleagues to study up and listen intently to everybody who comes in.

“It really will tug at your heartstrings. Even if we can’t help everybody, you want to,” he said. (He also offered a warning: “You’re going to learn a lot of new acronyms.”)

Rep. Catherine Abercrombie, D-Meriden, who co-chairs the Human Services Committee, meanwhile, offered advice for the advocates in the audience. “Don’t take it for granted that legislators know your story,” she said, adding that, like being a parent, being a lawmaker “doesn’t come with a rule book.”

When working on the budget, “A face with a name makes a difference,” Abercrombie said. 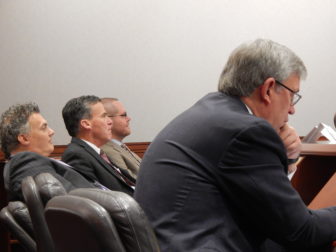 Some of the talks legislators heard sounded like brief versions of the pitches they’ll hear during the session.

Gian-Carl Casa, president and CEO of the CT Community Nonprofit Alliance, which represents nonprofit agencies that contract with the state, offered his take on the budget: Unless taxes rise significantly – something Casa said is unlikely – there will have to be more than $1 billion in cuts, most likely from the small portion of state spending that doesn’t cover fixed costs or contractual obligations.

“That’s where the money is that helps human beings in the state of Connecticut,” he said.

And Casa offered his organization’s take on how to address it: Allow the private sector to handle the human services the state currently provides. “We don’t see this as a partisan issue,” he said.

Fontanella told the legislators about the Office of the Healthcare Advocate, which serves thousands of state residents each year by helping them navigate the health care system or appeal insurance denials. Mental health is the largest category of services for which they receive inquiries or provide advocacy, he said.

Others spoke about trauma and addiction, including the opioid epidemic.

He pointed legislators to findings from a group that recently explored the opioid crisis, recommending expanded access to medication-assisted treatment, greater access to naloxone – which can reverse the effects of an opioid overdose – and efforts to reduce overprescribing of opioids. 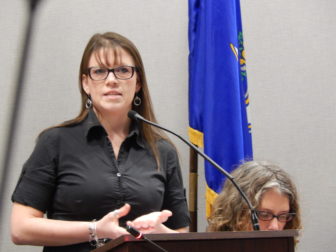 Michaela Fissel, who directs a young adult initiative at the organization Advocacy Unlimited, said that with the right supports, young adults dealing with behavioral health issues won’t have to be part of the mental health system long-term. She urged legislators to support efforts to develop a recovery high school in the state – which would serve students recovering from addiction – and to require that all students receive education on mental health.

And Fissel asked legislators to consider allocating money to peer-delivered services, in which people receive assistance from someone who has had similar experiences.

Loel Meckel, assistant director of the forensic services division at the state Department of Mental Health and Addiction Services, had another request for legislators.

He urged legislators to be aware of that when talking to constituents, who might have those misconceptions. Maybe you can help correct some of them, he added.

Some described personal experiences, including a woman in the audience who said she had bipolar disorder and post-traumatic stress disorder after experiencing rape and abuse. She spent two days on life support after attempting suicide five years ago. “It’s been so hard for me because I’ve been picked on since birth,” she said.

“We’re stigmatized in the mental health field,” she said, adding that whenever someone with mental illness commits a crime, the whole community faces scrutiny.

She said she hoped that someday, she could look at herself in the mirror and feel good about herself.

About a dozen legislators came to the training.

Wilson, the newly elected representative from Litchfield, said it’s a topic that affects people in his district, and that its importance became clear to him while knocking on doors during the campaign.

“My concern is, how are we going to find the money, continue the money, where there’s essential services that are needed?” he said.