Nearly one in four Connecticut adults has a health condition that probably would make them unable to buy insurance through the individual market without protections for people with pre-existing conditions, such as those created by Obamacare, according to an analysis released Monday by the Kaiser Family Foundation.

Overall, 52.2 million American adults under 65 have pre-existing conditions that could make them uninsurable in the individual market, including 522,000 in Connecticut, the analysis found.

The estimates offer a glimpse at the stakes as Republicans seek to repeal and replace the Affordable Care Act, or ACA. The authors described the estimates, based on state and national surveys that ask about people’s medical conditions, as conservative.

President-elect Donald J. Trump and other Republicans seeking to repeal the Affordable Care Act have said they want to keep certain provisions, including the requirement that people be allowed to buy coverage regardless of their medical histories. But experts say doing so could be challenging without a mechanism to require young, healthy people to also buy insurance – such as Obamacare’s unpopular individual mandate.

“As discussions get underway to repeal and replace the ACA, this analysis quantifies the number of adults who would be at risk of being denied if they were to seek coverage in the individual market under pre-ACA rules,” the authors wrote. “What types of protections are preserved for people with pre-existing conditions will be a key element in the debate over repealing and replacing the ACA.”

Most Americans have health insurance coverage through employer-sponsored plans or government programs such as Medicare and Medicaid, which don’t take people’s medical histories into account in determining whether they can be covered. Last year, about 8 percent of those under 65 had individual-market insurance. But the authors noted that many more people have used the individual market intermittently, such as after a job loss, divorce or aging out of their parents’ health plan.

Before the Affordable Care Act, individual-market insurance companies kept lists of medical conditions that would lead a person’s application to be declined. Those included HIV or AIDS, alcohol abuse, cancer, heart disease, diabetes, epilepsy, kidney disease, mental disorders, severe obesity, sleep apnea, pregnancy, or a pending surgery or hospitalization, according to the analysis.

Under Obamacare, insurance companies cannot take into account a person’s medical history in determining whether to offer the person coverage or what price to charge. Surveys have found those aspects of the law are among the most popular. 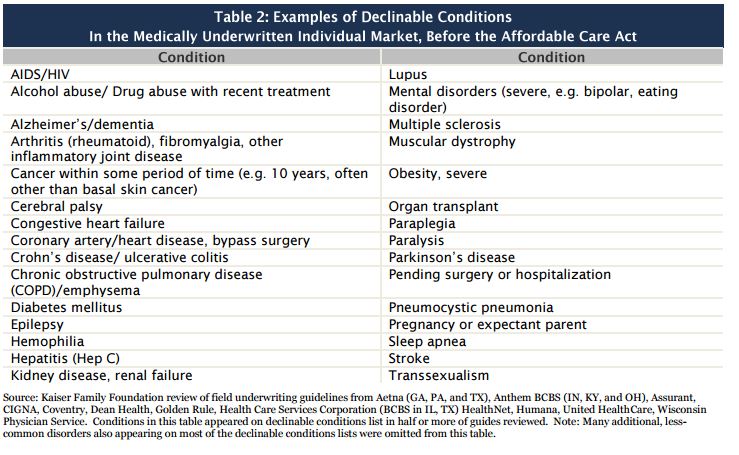 Examples of pre-existing conditions that would make people uninsurable in the individual market before the federal health law.

The proportion of residents with conditions that could render them uninsurable varied among states, from 22 percent in Colorado and Minnesota to 36 percent in West Virginia.

The analysis used data from the 2015 National Health Interview Survey, conducted by the federal Centers for Disease Control and Prevention, which asks about medical conditions, as well as the Behavioral Risk Factor Surveillance System surveys, which are conducted at the state level. They also used underwriting manuals used in the individual insurance market before Obamacare to determine which conditions would typically lead to a denial of coverage.

The analysis focused on adults, not children. In 2011, Connecticut lawmakers wrote several requirements of the federal health law into state statute, including prohibiting insurance companies from denying coverage to people under 19 on the basis of having a pre-existing condition.