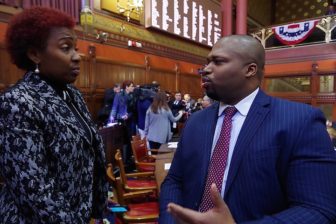 Pat Dillon smokes, but she doesn’t mind paying 45 cents more tax per pack to help solve Connecticut’s budget deficit. Robyn Porter doesn’t smoke — but many of her constituents do, and she doesn’t want to “punish” them.

The two New Haven state representatives offered those takes Wednesday after Gov. Dannel P. Malloy proposed proposed a $40.6 billion two-year budget that included raising the taxes on a pack of cigarettes by 45 cents, to bring the total cost to $4.35.

That’s on par with prices in New York, to which state budget chief Ben Barnes pointed as a standard of comparison.

The tax does not include synthetic smoking products like vapes and e-cigarettes, despite their fast-growing popularity among young adults.

Malloy is seeking bigger savings from labor and a new state-run Municipal Accountability Review Board. But a higher “sin tax,” he and Barnes wrote in the budget plan, would not just help bring in needed money. It could help cut down tobacco-related disease, which currently kills more people across the country than alcohol, AIDS, car crashes, illegal drugs, accidents, murders and suicides combined, according to the Centers for Disease Control (CDC). (Malloy rejected a cigarette tax hike in 2014 when he was running for reelection and declaring he wouldn’t raise any taxes.)

The problem, argued Rep. Porter, whose district includes New Haven’s Newhallville neighborhood, is that it can also end up punishing poor people for their patterns of addiction without offering alternative treatment programs or therapies, like smoking cessation counseling. Lower-income people smoke at disproportionately higher rates.

Bad For The Poor?

“We cannot continue to balance this budget on the backs of poor people,” Porter said after Malloy concluded a budget address to legislators in the House of Representatives. “I don’t favor regressive taxes because they tax poor people. We have money in the state that we’re not going after, so why this? We did this last year, and still came back with a deficit. What are we going to say when we do it again and come back with a deficit?”

“In the last budget they proposed an increase, and I fought to lower it. I’ll fight again,” he said. “Although smoking is harmful, it’s a choice. I’m a smoker; I know the consequences. It’s my choice. Why should I pay an additional tax? We cannot continue to tax smokers who are making that choice. It’s the same population—working individuals, low-income families.”

“Let’s talk about more progressive policies that will bring revenue to the state of Connecticut,” he said, referencing his proposed bill 6961 granting tax relief to corporate businesses that would create jobs in the state, and proposed legalization of marijuana. “We’d be balancing and generating revenue from a different source. That’s what we need to be thinking about.”

“I’m not sure about the cigarette tax yet,” Winfield said. “Sin taxes in general that are regressive are seen as less egregious than a regressive tax which is not a sin tax, but I will await arguments.”

He added, however, that “the effect is penalizing poor people whether that is the intention or not.”

Lemar agreed. “The health care costs of addiction are extraordinary, so we’ll try to balance the regressivity of the tax with the potential benefit we would receive,” he said. He added that he had hoped the budget would consider taxing the ultra-wealthy instead.

Other New Haven lawmakers praised the proposal because of its impact on public health and cardiovascular risk. According to studies by the Connecticut Tobacco and Health Trust Fund and the Campaign for Tobacco-Free Kids, 13.5 percent of Connecticut adults (18 and over), and 10.6 percent of high school students smoked cigarettes in 2015. That’s already down from 15.4 percent for adults in 2014. In the view of Senate Majority Leader Martin Looney, that number — which still results in 4,900 deaths per year — could be even lower.

“I fully support the increase,” he said. “Every time it [the tax] goes up, we see a decline in smokers.”

When asked about its possible effect on the poor, Looney responded that his focus is on the governor’s proposed cut to the Earned Income Tax Credit program, which exempts wages of lower-income earners from taxes. Looney originally authored the law that created that program and has fought to increase the credit in recent years. He said it’s more important to preserve that credit.

“We have to raise taxes somewhere, and that seems enough of a reason” for the cigarette tax hike, he said.

“Did I propose that [tobacco tax]? Because I should have,” she said, noting her own proposal to tax sugar-sweetened beverages. “It creates an extra barrier for young people, and reduces their activity [with tobacco]. They might not even start.”

“It’s absolutely regressive,” Dillon acknowledged. “But the strongest defense I can find [for the proposal] is that it delays, or stops, tobacco use for young people.”

A study released on youth consumption habits from the Campaign for Tobacco-Free Kids shows use plummeting as the national average price of a pack inched toward $6 in 2015. Several tobacco companies themselves, also quoted in the study, have pointed to raising tobacco taxes as the largest deterrent to purchasing their products.

Dillon added that her own habits — she stopped smoking regularly years ago but “still binges” from time to time, particularly close to the end of legislative session — “have absolutely nothing to do with” how she feels about the tax. “And why should they?” she said.

Convening unofficially in the hallway after the meeting, New Haven Mayor Toni Harp and mayoral Chief of Staff Tomas Reyes said the proposed increase would help reduce tobacco use.

“Personally, I support raising taxes on cigarettes,” said Reyes, whose wife is in recovery after lung surgery. “But we ought to use some of the money in our communities. Cessation and mental health care — they are connected. So if we have an additional $60 million [in revenue], some of that needs to go to” health care efforts.

The state hasn’t always done that. A report titled “Broken Promises to Our Children” from Campaign for Tobacco-Free Kids suggests that Connecticut is on track to “collect $519.7 million in revenue this year from the major settlement against tobacco companies, but will spend none of it on tobacco prevention programs.” That means it now ranks 50th out of 50 in preventative funding measures, down from 38th last year. Meanwhile the Connecticut Mental Health Center (CMHC), which leads a smoking cessation and prevention program and is a leader in research, is on the budgetary chopping block again this year.

“The thing about this tax is that there’s a huge public health component. We know smoking leads to heart disease,” said Harp, calling herself “neutral” on the issue but noting the deleterious role of tobacco on cardiovascular health. (According to the American College of Cardiology, quitting smoking helps women cut their rate of heart attack by an almost-immediate 50 percent). “One of the things that we are trying to do in New Haven is help people that are trying to get treatment for addiction.”