Electoral College in the crosshairs 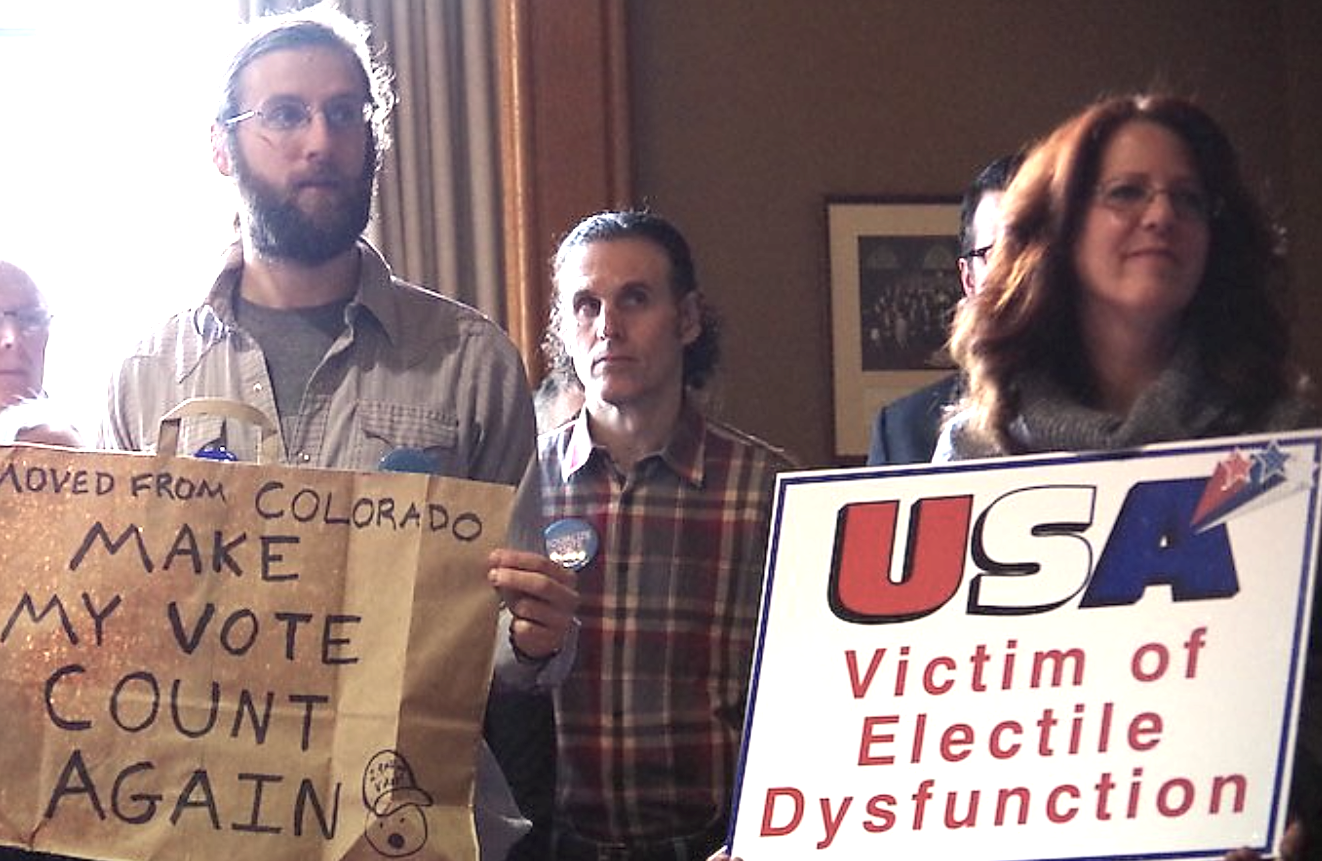 Hartford —New Havener Aaron Goode headed to Hartford this week for the fifth year in a row to urge lawmakers to neuter the Electoral College. This year something had changed.

A national election has given Goode’s quest for  a “national popular vote” new supporters — and detractors.

Goode and other popular-vote advocates — who seek to have presidential elections decided by who receives the most overall votes, rather than the most electoral votes from individual states — testified at a Capitol hearing on two bills that would have Connecticut join a “compact” of states that would agree to cast all their electoral votes for the winner of the popular vote.

This year was different because 2016 saw a controversial, hard-fought presidential election in which one candidate (Hillary Clinton) won the popular vote, but the other (Donald Trump) won the Electoral College and became president. Since then more states have signed up for the compact. And a new sense of urgency, on both sides, was palpable at Wednesday’s hearing.

The hearing was before the Government Administration and Elections Committee.

Wednesday’s hearing revealed a partisan divide: Democrats generally backed the bill, while Republicans opposed it. Republicans argued that basing a presidential election’s outcome on the popular vote — effectively erasing the Electoral College — is unconstitutional, and renders obsolete a system that protects smaller, sometimes overlooked voters and districts and a state’s voting pattern. Democrats argued that the Electoral College is an antiquated system, and Connecticut will have more to gain during election seasons if it transitions to a popular vote model.

Why not eliminate the college? 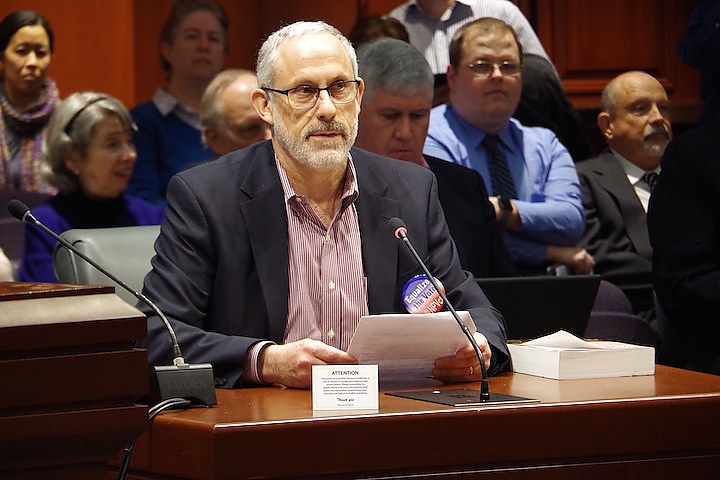 The difference in outlooks was apparent in an exchange between Jonathan Perloe, leader of National Popular Vote CT, and Republican State Sen. Michael McLachlan, who has a proposed bill protecting the Electoral College.

“What if the national popular vote swings Republican in the next election?” McLachlan asked. “Do you anticipate still supporting the compact then?”

Perloe, who had spoken about his joy in watching a daughter vote for Clinton in Pennsylvania — where her vote counted more — responded that the first states to discuss the compact (Arizona, for example) had swung red in the last several elections.

“Right now, I actually feel sorry for Republicans in Connecticut who voted for Trump … because right now their votes don’t count,” Perloe said.

“But if there is a desire for the National Popular Vote …. why aren’t you seeking to just eliminate the Electoral College?” McLachlan continued. “This neuters the Electoral College … and changes it from its original setup.” (Advocates for the compact say amending the Constitution would be a better solution, but too difficult to achieve.)

“This is the only election where we have hung onto this thing established in the Constitution,” Perloe said. “There were 400 campaign events last year, and 94 percent of them took place in battleground states. We want people to campaign differently.”

“Listen,” said Perloe. “The feeling isn’t that we’re trying to do an end-run around the Constitution.”

A gift to slave states 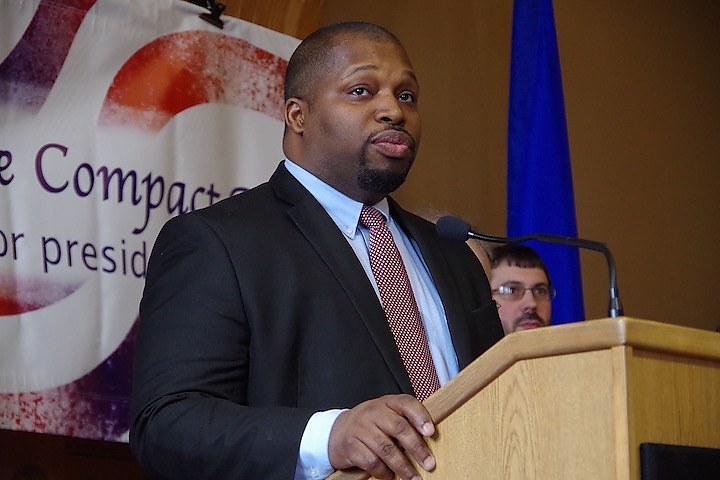 Winfield: A bad system to begin with.

The movement for the National Popular Vote has existed since 2000, when Yale Law Professor Akhil Amar and two other authors published an article in Slate arguing for a “one person, one vote” system to replace the Electoral College.

In 2005, states began the process of discussing the National Popular Vote Interstate Compact, which would ultimately elect the president and vice president by popular vote, instead of by the Electoral College. And in 2012 — the same time that the Connecticut legislature started talking about it — it gained momentum as writer and pollster Nate Silver wrote about it for the political website Five Thirty Eight.

The hearing followed a press conference where several New Haveners voiced their support for the bills. “The time has come to acknowledge that our system is an anachronism,” said state Senate President Pro Tempore Martin Looney. “More than 100 years after the 17th Amendment and suffrage, the time has come” to embrace the popular vote. Looney handed the microphone off to Winfield, who spoke from a personal and legislative angle on the bills.

“We’ve been talking about this for a long time,” Sen. Winfield said. “This is an issue that has been important to the people in our state for a long time. The Electoral College was designed to give small states … small states that owned slaves, power that they didn’t have. So for a person like me this has been an issue for a particularly long time because it has something to do with a part of my history that we have done a lot to move away from, and Connecticut is trying to move away from.”

“Let’s not think about this in terms of the election we just had, but dealing with some parts of our history that are important,” he added.

Goode, for his part, said the compact isn’t a partisan issue at all — though a Democrat, he supported it at a time when Silver was arguing that it would benefit Republicans over Democrats. It isn’t tied to a belief that Connecticut would benefit, either. It’s a core belief he holds that the power of one person’s vote should be equal across the country, he said.

“For me, it’s not about whether it benefits Democrats or Republicans – or the state of Connecticut!” he said. “I just want one person, one vote. I don’t think people across the country should have to pay 100 percent of taxes to be counted for 0.7 percent of a vote.”

“The electoral college and the Three-Fifths Clause go hand in hand,” he added. “In its DNA, I think it has aspects of institutional racism. So what bothers me when people say ‘it’s sour grapes’ from Democrats is that this has been going on for five years! This isn’t some Johnny Come Lately thing where we’re just pissed off about Trump. It’s so clearly about one person, one vote.”

This story was originally published in the New Haven Independent.