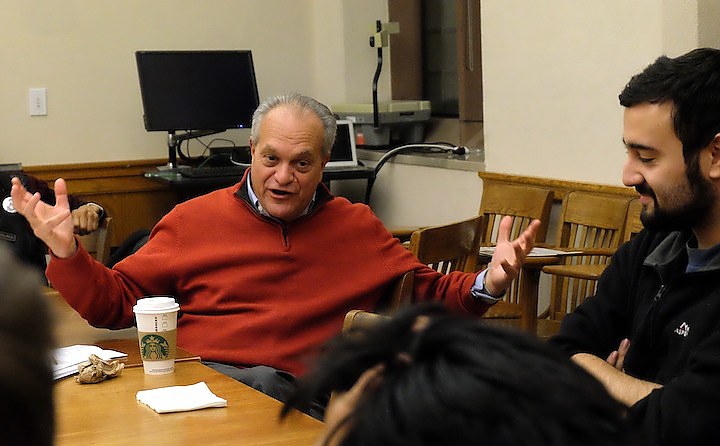 New Haven — John DeStefano has seen this movie before — and he’s expecting to see a sequel.

DeStefano, New Haven’s former mayor and now a part-time teacher at Yale, made that prediction about federal immigration raids in New Haven during a presentation at the university’s Linsley-Chittenden Hall last week to a group of urban studies-minded undergraduates.

DeStefano recounted the city’s adoption of an immigrant-friendly identification card in 2007 — and the retaliatory, sweeping federal raids that led a day later to 32 arrests of undocumented immigrants in Fair Haven. President Donald Trump’s newly expanded directions for rounding up immigrants and his plan to hire 10,000 new immigration officers, DeStefano said, will “bubble from the bottom up” in cities and states.

“Now let me predict how it’s going to happen,” DeStefano said. “[The federal government is] going to do exactly what those jerks did in Fair Haven. You know who did the biggest help to us in protecting immigrants? When ICE [Immigration and Customs Enforcement] came and did that insane raid.”

“I actually believe we will be a target for a raid,” he continued. “ I believe people have memories, I believe they’ll remember 2007, remember we broke their balls and called them on it. And I think they will hit New Haven with a raid.”

As mayor, DeStefano oversaw New Haven’s evolution into a “sanctuary city” for undocumented immigrants. (“Back in 2007, I didn’t know what the hell you were talking about,” DeStefano mused Thursday. “We never used those words, ‘sanctuary city.’”) His administration oversaw the adoption of a police general order that prohibits officers in most cases from inquiring into people’s immigration status. The city’s immigrant population swelled during DeStefano’s tenure, and the Ecuadorian government opened a consulate here.

In 2007, 36 hours after the Board of Alders (then called the Board of Aldermen) approved his administration’s the ID card policy into action, DeStefano found himself in his office at 7:30 a.m. The phone rang. There was no receptionist around, so he took the call himself. Someone tipped him off on raids happening in Fair Haven; DeStefano, in disbelief, called then-Police Chief Francisco Ortiz. “What raids?” DeStefano recalled Ortiz as saying.

“This is when I knew this was not good, when the police chief doesn’t know,” DeStefano said. It became a defining moment in the second half of his mayoral tenure, during which he became a national figure in the emerging urban pro-immigrant movement. Emails that later became public showed that the feds had been trying to stop New Haven from issuing the ID cards.

Deeming the raids “a hot mess,” DeStefano pointed to the failure of ICE (Immigration and Customs Enforcement) to notify New Haven police. He accused the federal officials of arresting “anyone that happened to be brown and undocumented and in the wrong place and wrong time,” citing instances of parents arrested in front of children. DeStefano pubicly blasted the feds and pledged support for immigrants, many of whom spent days locked in their homes in fear. He confronted then-Secretary of Homeland Security Michael Chertoff, who later agreed to postpone further raids.

“All this by saying — New Haven wasn’t motivated by the sanctuary city concept, we weren’t motivated trying to make a political point,” DeStefano said. “We were just trying to serve fellow residents of our community.”

DeStefano, who retired as mayor in 2014 after serving for 20 years, was making a broader point on the value of immigrants to urban spaces, depicting New Haven’s immigrants as job-holders and taxpayers who reinvigorate parts of town (e.g. Grand Avenue), bolstering the city with their economic and social mobility.

DeStefano, who said he anticipates some form of federal overreaction (raiding New Haven, building a border wall, hiring more immigration enforcement officers), is looking past those initial setbacks. He said various communities in the city have already begun preparing people for raids, making sure they understand their rights. Organizers have signed up hundreds of New Haveners for resistance actions and immigrant-support duties in case raids do occur.

It’ll be up to the cities and states to not only maintain individual rights and liberties, but also make (or uphold) progress in areas like public education and climate change, he added.

“It’ll be thousands of pebbles thrown into a pond, to create huge tsunami of responses,” DeStefano said.

Andrew Sandweiss, a Yale sophomore from Maine and co-president of CITY Yale (the urban studies group that hosted the event), said he felt assured by DeStefano’s conviction that New Haven would be able to withstand punches. “It was very encouraging,” Sandweiss said.