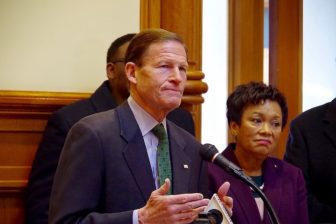 New Haven may have to lay off 20 workers and community agencies would lose millions in anti-poverty dollars if President Donald Trump’s newly proposed federal budget passes.

U.S. Sen. Richard Blumenthal joined Mayor Toni Harp to deliver that message Friday morning in a press conference at New Haven’s City Hall. Calling the budget “a betrayal of our American values,” Blumenthal promised to fight proposed cuts, which include elimination of Transportation Investment Generating Economic Recovery (TIGER) and Community Development Block Grant programs that he hailed as vital to the city’s survival.

“For me, this budget is dead on arrival,” he said. “New Haven is not the only affected city, but it is a poster city for how it would disastrously damage communities. It is penny-wise, pound-foolish.”

“It is further evidence the current administration would dismantle a support system upon which New Haven and its residents literally depend,” said Harp. She added that it “would take an untenable human toll.”

That toll, she said, is most visible in the annual $6 million in federal funding that the city receives from the $3 billion Community Development Block Grant program, which funds 20 positions in the city’s government and goes toward subsidized housing, services for the disabled and elderly, anti-blight initiatives and neighborhood revitalization. Without that funding, Harp said, the city may have to eliminate those positions, and will still be left reeling from millions of dollars in cuts to social-assistance organizations like Habitat for Humanity, the Livable City Initiative (LCI), Small Business Service Center (SBSC), Cornell Scott – Hill Health Corporation, Fair Haven Community Health Clinic, Mary Wade Home, Neighborhood Housing Services and more.

“They [proposed cuts] will also likely result in layoffs of city staff to keep the budget balanced, putting even more people in New Haven back on their heels,” said Harp.

During the 2015-16 program year, the city spent around $2.9 million on “CDBG-eligible activities,” according to city Communications Director Laurence Grotheer. Grant funding allowed the city to acquire 81 properties, 26 of which came through foreclosure ($452,328); dispose of 12 properties including five residential structures ($45,000); demolish five structures ($113,493); board up nine properties and maintain another 17 as public space; support farming initiatives in Fair Haven, the Hill, and Newhallville ($30,000 to the New Haven Ecology Initiative); and assist with home ownership. For a full breakdown, download this document.

Blumenthal said that New Haven may also suffer from proposed elimination of federal TIGER grants, for which the city received $20 million for a downtown project last year, and cuts to FEMA that would take away money with which New Haven and Connecticut are still recovering from Hurricane Sandy.

“Donald Trump went into poor and African-American communities, and said: Vote for me, what do you have to lose?” Blumenthal said. “The answer is, we have everything to lose.”