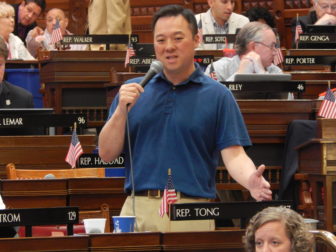 The House of Representatives voted 88-62 Saturday to approve and send to the Senate a compromise bail reform package backed by Gov. Dannel P. Malloy and the Connecticut Sentencing Commission.

The bill would be a step toward limiting the number of defendants who are jailed awaiting trial because of their inability to afford a relatively modest bail or the services of a bail agent, but it falls short of the governor’s goal of eliminating the need for a for-profit bail industry in Connecticut.

The House’s approval of the legislation came almost exactly one year after it declined to vote on a similar bail reform package during the last legislative session.

The compromise package – which has the backing of both the left-leaning American Civil Liberties Union and right-leaning Yankee Institute for Public Policy – makes several changes to bail practices. Those include:

The bill’s language was included in both the Democratic and Republican budget proposals unveiled earlier in the session. The package is projected to save the state $30 million over the next two fiscal years.

Rep. William Tong, D-Stamford, co-chair of the legislature’s Judiciary Committee, said between 350 and 400 people currently are incarcerated in Connecticut because they could not post bail.

Tong said the legislation ensures “people aren’t held, detained in our jails and in our prisons, for low-level misdemeanor, non-violent offenses simply because they can’t afford” bail.

“The purpose is not to let people out of jail,” he said.

Rep. Rosa Rebimbas, R-Naugatuck, said she felt confident judges still would require bail in misdemeanor cases that warrant it, despite concerns from some of her fellow Republicans they would not. She said the bipartisan process of crafting the package made her decision to support the final version much less difficult. 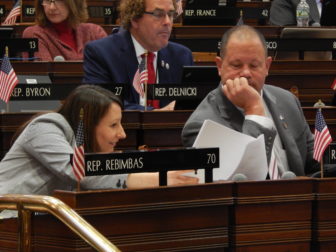 The bill was backed by 77 Democrats and 11 Republicans. Two of the House’s most conservative Democrats – John K. Hampton of Simsbury and Pat Boyd of Pomfret – voted against it.

Malloy called the bill “an important next step in creating a fairer and more equitable criminal justice system” and praised its passage.

“Across the country, courts are ruling the current system of bail is unconstitutional,” Malloy said. “This legislation brings us into compliance with those rulings. The fact is that there are hundreds of individuals currently locked up in Connecticut jails, not because they are [a] threat to society, but simply because they are poor. And being poor should never be a crime.”

Some legislators voiced concern that the bill would jeopardize public safety, which dominated much of the House debate.

“I believe that it constitutes a danger to the public,” said Rep. David Labriola, R-Oxford. “It interferes with the judge’s discretion by making a judge articulate the specific reasons why bond is set on all misdemeanors. It constitutes an impediment to setting of bond. It will result in more defendants being released.”

Rep. Stephen Harding, R-Brookfield, said the bill “sends the message” that judges should not require bonds for misdemeanors.

Still, the bill garnered nearly a dozen Republican votes. Rep. Terri Wood, R-Darien, said it was a matter of “social justice” and the “right thing to do.”

“It is patently unfair that someone who has the means to pay their bail can get out and someone who can’t, can’t get out,” Wood said. “Granted, they’ve done something wrong, but it’s a very defined area of what they’ve done wrong. These are people who are not going to be dangerous to other people.”